So what could a Global Partnership on Development Data do for us?

As my regular post-2015 update from the invaluable Rachel Quint at the Hewlett foundation reminded me today, there have been (at least) six separate proposals for a global partnership for development data over the last two years. The idea has a lot of fans out there, with supporters ranging from the Presidents of Indonesia and Liberia (in the High Level Panel’s report), the chief statisticians of South Africa, India, Canada and Hungary (in the IEAG report), data experts in the World Bank, the UN Secretary General (in his ‘synthesis report’) and academics from institutions including the Centre for Global Development, ODI, SDSN and NYU

And so. Will there actually be a global partnership for development data?  I hope so, for two reasons.

Firstly, there are the specific and practical things that a partnership could do.

These are many, but three stand out for me. The first is pretty basic. It was a source of constant frustration, while I was working on the IEAG report, to be hearing about some fantastic and inspirational initiatives to solve problems with data going on in one part of the world, while at the same time, hearing people in a different place lamenting their inability to solve the exact same problem. Something that systematically shared experiences and knowledge between countries and organisations could save time, save money, and perhaps even save lives.

A second big problem at global level is a lack of shared standards. Too much time and money is wasted reverse engineering data created in one system to make it fit another.  Too much of the data from one survey can’t be combined with the data from another to add it up into something with more statistical power. Standards and protocols are being invented again and again from scratch, and huge inefficiencies are being created every day.

A third problem is data sharing. Famously, when the Ebola epidemic broke out, valuable time was wasted negotiating how data from mobile phone records could be shared and analysed to help provide the information to track the epidemic. That shouldn’t happen, but it will happen, again and again, unless public-private partnerships are worked out to share data when the next disaster hits, wherever that is.

A global partnership on data could solve real, everyday problems like these. But it would also serve a second purpose. A partnership would create something lasting out of the current excitement around data. The activities and the focus of the partnership would change over time, but just having it would make sure that data has advocates once political attention inevitably moves on to something else.

This is what global institutions do. They all operate in different ways, but the Open Government Partnership is a constant voice arguing for greater openness; GAVI will remind the world why vaccines are important even when minds are focused elsewhere; and the Global Partnership for Education is always there to speak up for the out-of-school.  However constituted, a global partnership on data would be a constant voice on the global scene reminding people of the importance of better data, and galvanising resources and action to that end.  If you care about better data, that has to be a good thing.

And it’s this long term commitment that will be needed to support the myriad country-level data revolutions that are at the heart of the change that is needed. These won’t happen overnight – someone has to be there for the long haul, to work with the civil society groups campaigning for open data, to link up the national statistical offices in one country who are grappling with the problems that another country solved two years ago, to show how partnerships of all the key actors: government, private sector and civil society can work together to increase both the demand for and the supply of good quality data. There are many great initiatives already underway in this area, not least the Paris21 partnership, but a bigger, more high-level global effort could coordinate and support these efforts by raising political profile, building broader relationships, and generating the kind of momentum that can really deliver results.

In a few years’ time, probably no one will care about the ‘data revolution’. But a global partnership on data could be a lasting legacy of this moment, and can be part of continuous improvements in the data on which we all depend.

This chart shows the percentage of European teams getting through to the last 16 in World Cup tournaments since 1986 (before which there was a last 12, in 1982, and a last 8 in the years before that, World Cup fact fans). 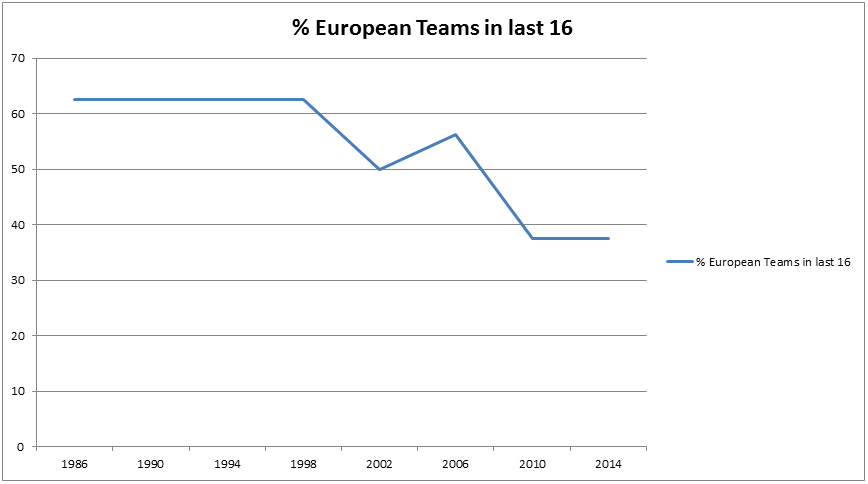 We are big fans of Norway here at GD. And look – in a bid to make oil production more environmentally friendly, the Norwegian parliament is hoping to force offshore oil rigs to use electrical power rather than burn gas or diesel.  Hurrah, obviously –  what’s not to love about the Scandinaviafication of oil production.

The Norwegians aren’t alone either.  Environmentally friendly drilling (by oil workers in shiny lipstick, obviously), is a thing, it seems…

So yay and double yay.  Let’s make oil production all green and cuddly and maybe we can stop worrying about those millions of barrels that are rolling up out of the sea every day and burning…oh wait a minute….

Thankfully the Daily Mail’s mean-spirited campaign to get the government to cut aid to pay for the UK’s flood response was swiftly dismissed by the PM in his press conference yesterday.  To recap: dealing with suffering at home by creating suffering in some other country probably isn’t the most moral or sensible approach, and anyway it’s an utterly unnecessary conversation to have because we know there is money elsewhere – the Treasury has a contingency fund for just this sort of thing, just for starters.

But it’s particularly ironic and wrong given that an international peer review of the UK’s plan for ‘building resilience to disasters’ (for which read floods), recommended just last year that

A more consistent approach, in terms of resilience and exporting national good practices through international cooperation, could be achieved through improved coordination between the Civil Contingencies Secretariat and the Department for International Development (DFID).

Or in other words, that the UK’s systems for flood defences could learn a lot from the work DFID is funding to build resilience in other countries.  Betting that the Mail won’t be reporting on that though….

The bicycle theory of social change

Something odd is happening on the streets of London. Cyclists are obeying the law in droves. On my daily cycle from home to work, it’s rare now to see anyone jumping a red light, or cycling the wrong way up a one way street, or cutting across a busy pavement.  Not unheard of, of course (so please don’t bother telling me about the exceptions), but rare.

The laws haven’t changed, but the behaviour has. So being a little bored with cycling the same route every day for 3 years, I started wondering why this might be. Two possible reasons. It might just be volume. When there are more people on bikes, they all seem to become more law-abiding. One cyclist on their own at a relatively empty junction will often still jump a red light. But once there are three or four, the power of peer pressure seems to keep those feet off the pedals and encourage almost everyone to stay put until the lights change.

Secondly, I wonder if people are starting to see the laws a bit differently. As cyclist deaths received more publicity, it seemed to me that riding got better. I don’t think it’s just because people are scared – any cyclist knows that crossing a busy junction during the pedestrian wave is much safer than waiting until the lights change and all the cars and lorries are thundering off as well. Instead, I wonder if it’s because cyclists feel that there’s more in it for them to obey the law. They want to be protected from bad and illegal and careless drivers – well, they have to do their bit too. And there seems more point in obeying a law that has something in it for you, rather than one that’s just an irritating inconvenience.

So that’s my theory of social change as demonstrated by London cyclists. Peer pressure and a bit of a tweak to the social contract underpinning a legal system can actually make people obey the law. Any lessons there for tax evaders?