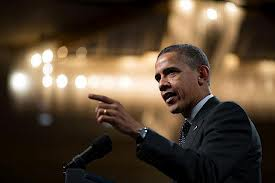 This was the development bit in President Obama’s State of the Union address on Tuesday night:

We also know that progress in the most impoverished parts of our world enriches us all.  In many places, people live on little more than a dollar a day.  So the United States will join with our allies to eradicate such extreme poverty in the next two decades: by connecting more people to the global economy and empowering women; by giving our young and brightest minds new opportunities to serve and helping communities to feed, power, and educate themselves; by saving the world’s children from preventable deaths; and by realizing the promise of an AIDS-free generation

Two things struck me – first, this is a shift from the ‘we can end poverty’ rhetoric that Owen Barder  recently pointed out has been around for decades – it’s a ‘we will’ with a time frame, not a ‘we can’ with a vague aspiration.  This could – let’s hope – be an important difference from those earlier statements.  Secondly, this is of course more or less the time frame that a new post-2015 agreement on development would cover – twenty years from now, or just over fifteen years from 2015.  If this is Obama committing to throw the US’s weight behind getting an effective post-2015 agreement, well, that’s very exciting indeed….