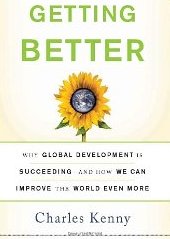 Charles Kenny’s Getting Better is one of the books of the moment (here’s a summary and reviews in NYT and the Financial Times and listen to it here).

It’s an upbeat account of progress. Things have got better around the world.

He notes that if one looks at almost any measure of quality of life except income there has been real and rapid progress. For example, infant mortality has halved since 1960 and countries in every region of the world have seen such improvements not only in health but in education, gender equality, civil and political rights too over the same period.

This is good news. I was struck by three things.

Third, I was really taken by the mismatch between the undeniable progress in non-income measures of wellbeing versus limited progress in income poverty reduction (if you remove China there are the same number of poor people under $1.25/day in the world that there were in 1990 and there are actually more poor African’s at the last count by the World Bank than in 1990; that said there’s new estimates coming soon and others are more optimistic like Chandy and Gertz at Brookings given growth since the last poverty count).

All of this raises the issue of what is a poor country – an important question when you’re allocating aid and it also reminded me of the question Harvard Economist, Dani Rodrik poses to his students (here) of – in income terms – would you rather be poor in a rich(er) country or rich in a poorer country? The answer (if it’s $ income purchasing power you care about) is perhaps counter-intuitive (see here).

The wisdom of course is richer countries are better places to live in terms of non-income standard of living too – or wealthier is healthier – as a study by another Harvard Economist, Lant Pritchett’s put it.

Although 20 years of the UN Human Development Report and the recent work at Oxford on Multi-Dimensional Poverty have placed a question mark over this whether this is always the case. Notably, that some countries have low income poverty but half of the population has deprivations in things like health, education and nutrition – this is the situation in the middle east and north Africa – no income poverty but high forms of other poverty.

And then there’s the whole world of subjective wellbeing – reported life satisfaction – defined differently by different people – generally as hedonic or happiness to economists (ie utility maximisation) or contentment vs ‘eudamonic’ to others.

One study by Jodha, an Indian anthropologist, is illustrative of the contradictions of such debates.

Jodha studied the same households in rural India over a twenty year period (1963-6 and 1982-4), both by conventional household income surveys and by villagers’ perceptions of their poverty and wellbeing, and found that:

Households that have become poorer by conventional measurements of income in fact appear better off when seen through different qualitative indicators of their wellbeing’. People felt they were better off because they consumed a greater range of commodities, were less reliant on particular patrons, and felt more independent with greater levels of mobility.

Consistent with Jodha are proposals from Ryan and Deci and others that autonomy – meaning ‘self-determination, independence and the regulation of behavior from within’ – is one of the three fundamental and universal psychological needs (along with relatedness and competence).

More recently, Kapur et al., analyse a unique survey designed and implemented by a Dalit community in UP, India, which they introduce as follows:

The survey capture[s] social practices and conditions important to them which are not captured in the usual household surveys… …The survey results show substantial changes in a wide variety of social practices affecting Dalit well-being—increased personal consumption patterns of status goods (e.g. grooming, eating), widespread adoption of “elite” practices around social events (e.g. weddings, births), less stigmatising personal relations of individuals across castes (e.g. economic and social interactions), and more expansion into non-traditional economic activities and occupations. These findings suggest that placing exclusive focus on measures of material well-being, such as consumption expenditure and its inequality, is misplaced as it misses important changes socially structured inequalities and hence in individuals’ “functionings.”

What does this all add up to in terms of policy? Governments can certainly shape prevailing attitudes (look a public information campaigns in Bangladesh to feed and school girls) and seek to address institutions that lead to discrimination with legislation. Policy can focus too on creating the conditions for greater opportunities too (see for example, the Human Opportunity Index). This might move policy towards a different way of approaching poverty tho and a huge range of trade-offs. Perhaps the main thing is things are getting better around the world and Charles Kenny’s book documents that very well indeed.