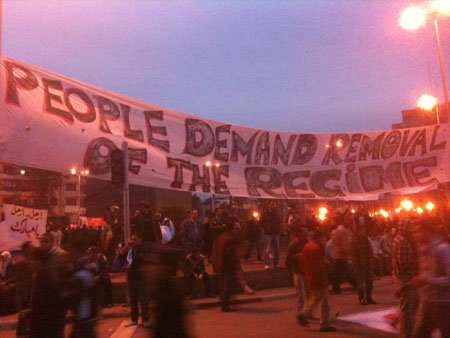 Tunisia, Egypt, Bahrain. Who’s next? Yemen or Libya or… Sudan, or Angola?

The race is on for a small set of numbers to predict major upheavals. Violence begins at $7000 per person (PPP) tweets Hans Rosling noting the flare up of pro-democracy protests seem to start at that level of income in Tunisia and last year in Thailand (Egypt is a bit under US$6000 per capita). The Economist has gone for a more sophisticated ‘Shoe Throwers Index’ adding more data. Whilst the NY times special has gone much further with a full range of data for the middle east and north Africa.

What do the countries have in common? Actually seems to boil down to 5 things…

4. The large numbers of young people – part of the demographic bulge or what the US NIC Global Trends 2025 report called the ‘arc of instability’ just two years ago when it noted ‘trends suggest major discontinuities, shocks and surprises’. You don’t say…

Check out the eye-watering inequality data from the World Bank and others. Across the Middle East and North Africa the richest 20% take 50% of the economic pie and although poverty rates by $1.25 a day (ie monetary or income poverty) are low, poverty rates by UNDP’s multi-dimensional poverty measure (ie health, education, nutrition, shelter, etc – people poor by 3 or more of 10 non-income dimensions) are around 50%.

The thing is there’s plenty of other places mixing middle income country status, youth bulges and inequality with limited civil and political freedoms and high multi-dimensional poverty… making who’s next potentially a much wider question.