Getting our priorities right I am hugely reassured to hear that, in this era of global crisis, British diplomats are focusing on the really important issues:

An agreement has been signed to bring two giant pandas to Edinburgh Zoo, the first to live in the UK for 17 years.

The deal was signed at Lancaster House in London by the Royal Zoological Society of Scotland and the Chinese Wildlife Conservation Association.

It was witnessed by Deputy Prime Minister Nick Clegg and Vice Premier of China Li Keqiang.

Tian Tian and Yangguang, a breeding pair born in 2003, will be under the custodianship of the zoo society.

The project represents the culmination of five years of political and diplomatic negotiation at the highest level and it is anticipated the giant pandas will arrive in their new home as soon as a date is agreed.

The Chinese government is said to charge around $2m a year to rent a pair of pandas. Apparently though, “the Giant Panda Project will be funded through sponsorship, offering unparalleled opportunities in terms of international corporate, commercial and diplomatic relationships between China and the UK.” 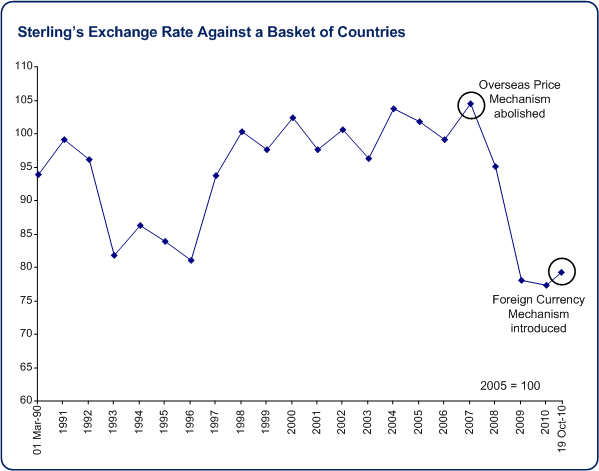 Today sees the publication of Organizing for Influence: UK Foreign Policy in An Age of Uncertainty (pdf), a new report authored by David and me, published by the Royal Institute of International Affairs. This is one of the first two publications from Chatham House’s project on rethinking Britain’s overall foreign policy role; the other, also out today, is a scene-setter by Chatham House’s director Robin Niblett. (Still to come are in-depth papers on Britain and… the global economy; the US and Europe; the rising powers; energy and climate; the developing world; and security and defence.)

In our report, we observe that while foreign policy and global issues barely got a mention during the general election campaign, it’s a racing certainty that the new coalition won’t have the luxury of ignoring them in government. As we’ve argued before, globalization is in the midst of what we term a ‘long crisis’. As an open economy and society, Britain is especially exposed. The government’s international workload is about to increase, perhaps dramatically. And given the need to reduce the deficit, it’s going to find itself stretched to the limit.

All this means, we think, that the government needs to work to upgrade and reform all aspects of its international programme. For one thing, that means making clear strategic choices – specifically, we think, seeing Britain’s international agenda through three overlapping lenses:

– First, national security. For us, this is about the direct threats to Britain, within a relatively short timescale – 5-10 years or so. It should not be about the longer-term or non-security risks like climate, scarcity or global economic risks. While we very much welcome the coalition’s creation of a National Security Council and appointment of the UK’s first National Security Adviser, we argue that if it tries to cover the whole of foreign policy, then we’ll be back to a storyline we know all too well: the urgent crowds out the essential, and preventive action gives way to fire-fighting.

– Second, global risks and the global system. We have to look at these issues separately from national security, we argue. For one thing, the amount of risk that’s tolerable in each is totally different. Any failure on the national security front can be disastrous. On global system issues, on the other hand, you have to take risks if you want to get anywhere – to be a venture capitalist, not a bank manager.

– Finally, fragile states. National security is fine as a lens when you’re looking at countries where the UK actually has troops deployed, like Afghanistan. But it’s the wrong lens for looking at places like Nigeria – where the challenge has much more to do with taking a long-term, political economy based approach to questions of governance, resilience and ‘development diplomacy’.

What does all this mean in practice?

A dramatic overhaul of the Foreign Office’s London HQ, for one thing – turning it into something that looks a lot more like the Cabinet Office (with at least half of senior policy posts filled from other government departments, and a lot more recruitment from outside government too), so that it can finally be the department for global issues that it should have become years ago.

A much tighter focus on fragile states at DFID, too – which we argue should close down its offices in ‘good-performing’ countries like Tanzania in favour of putting its aid through partnerships with other donors, or the multilateral system, and focusing its staff much more heavily on the really difficult cases. It’s staff, not cash, that’s DFID’s scarcest resource, so that’s what it needs to prioritise. (Did you know that DFID has only 2,586 people – to the Foreign Office’s 14,549?)

Plus a bunch more recommendations besides – including more ambassadors for issues (like we already have on climate and arms control), a tighter focus on the alliances and networks that could really magnify UK influence (especially the EU, G20 and NATO), a much bigger role for Parliament in foreign policy, and – perhaps the farthest reaching change of all – allocating budgets to strategies rather than departments, on the basis of first-principles reviews of UK objectives, capabilities and performance on the 3 areas of national security, global systems and fragile states.

Read the whole thing – all comments, as ever, very welcome. We’re also doing an event on the report at Chatham House on 9 June, and will be running the concluding session of the Institute’s two day conference on Britain’s future foreign policy role on 13 and 14 July.