On the web: history and economics, the voice of the BRICs, and the UK’s emerging three-party politics…

– Writing in the The New York Review of Books, Paul Krugman and Robin Wells highlight the importance of historical perspective in understanding the financial crisis. Experience, they suggest, shows that a failure to implement significant post-crisis reforms leads to “a resurgence of financial folly, which always flourishes given a chance.”

Michael Pomerleano explains the need for a new institution with the necessary legitimacy to provide global financial stability, arguing that “[n]ational public policies can no longer be independent of global collective-action problems”. Amartya Sen, meanwhile, explores the continuing significance of the 18th Century ideas of Adam Smith to contemporary global economic troubles.

– Elsewhere, in an interview with The Christian Science Monitor, Henry Kissinger offers his views on Obama’s recent nuclear initiatives, US-China relations, and coherence among the BRICs. Over at World Politics Review, Nikolas Gvosdev reports on the lack of support forthcoming among BRIC countries for strict sanctions on Iran and highlights some of the other options open to the US administration in dealing with Tehran. Jonathan Holslag, meanwhile, assesses China’s recent diplomatic “charm offensive”, concluding that this will yield little over the long-term if words aren’t backed up by meaningful action.

– Finally, two television debates and nearly three weeks into the British general election campaign, David Marquand explains why this is “a moment for careful historical reconnaissance”. Assessing the rise of Nick Clegg and the Liberal Democrats, he explores comparisons with the three-party politics of Britain in the early 1920s. The FT’s Philip Stephens, meanwhile, assesses the impact of the debates and the implications of a hung parliament for the British electoral system.

This morning, The Guardian’s website leads with a polling sensation. Apparently, Nick Clegg did so well is last night’s debate that the British election is now a two-horse race between the Lib Dems and the Tories, with Labour the UK’s new third party. 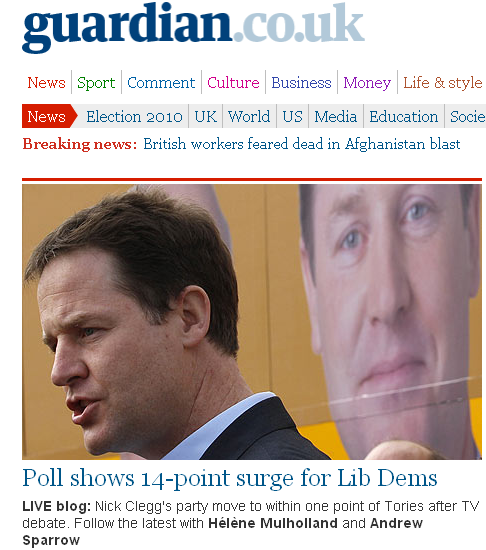 Such a sensational story – and so prominently placed – must be built on robust foundations, right? No. It turns out that:

This – apparently – is called journalism.

I’ve been reading the comments about the way we reported the ComRes poll. Twitter is a wonderful source of information (if we didn’t use it, this blog would be slower and far less informative) and the figures were released by journalists who are normally reliable. But on this occasion the information was misleading. I should have waited until I had spoken to ComRes before going into overdrive. I’m sorry about that.

My beef is not really with Andrew’s live blog – which is clearly contingent and updated as new information is uncovered – but with the decision to use the information from a tweet as the basis for the main headline on the Guardian website front page. Would love to know which editor made that decision.

Update III: Here’s the Guardian’s description of the methodology for its own poll on the debate:

I have read this a dozen times and have no idea what it means.

On the web: revolution in Kyrgyzstan, the UK election and policy discourse, and a picture of sartorial elegance…

– From the streets of Bishkek, Standpoint‘s Ben Judah offers an eyewitness account of the uprising in Kyrgyzstan. The Boston Globe has photos here. Alexey Semyonov and Baktybek Abdrisaev suggest what the new interim leader and former foreign minister, Roza Otunbayeva, must now do to restore order and democracy. openDemocracy, meanwhile, puts Kyrgyzstan’s experience in broader Central Asian context, suggesting the role that the OSCE could play in promoting regional stability.

– Writing in The American Prospect, Spencer Ackerman reassesses Obama’s foreign policy doctrine, evaluating attempts to achieve progress on the international stage in the face of domestic opposition. Philip Stephens suggests why the current US President is no Jimmy Carter, with the passing of healthcare and success on the nuclear front beginning to overturn an initial “perception of failure”.

– Elsewhere, with the UK election campaign now in full swing, Bloomberg has news of the Queen’s preparations in the event of a hung parliament. Over at the Institute for Government, meanwhile, Peter Riddell suggests how the language of public policy might shift should there be a change in government.

– Finally, the National Post has news (complete with photos!) that Kim Jong-Il has assumed his place at the sartorial avant-garde.