Seemingly inadvertently yesterday, David Cameron made a commitment to legislation that would force utilities to ensure their customers were always on the cheapest tariff for their energy supplies.

The proposal has been met with some derision and now seems to be unravelling, but it’s problematic principally because it does not go nearly far enough.

In this, as in many markets, the odds are stacked against the consumer. Tariffs have proliferated, becoming increasingly difficult to compare, making informed decisions almost impossible. Few people really understand what they’re buying.

This is not simply a problem for the ill-educated. As I pointed out in a paper for the Long Finance initiative, MBA students prove incapable of determining which mortgage offers them a better deal, even when dealing with fewer parameters than are offered to British borrowers.

A massive information asymmetry is at work. Companies understand their customers’ cognitive biases. They crunch the likely impact of millions of buying decisions. And they frame choices in ways that turn what should be plain-vanilla commodities into much more profitable branded products.

There is only one answer to this: redesign markets from the consumers’ point of view. There are two main tasks.

First: enable the creation of technologies that level the playing field for consumers.

If you venture into a complex market without representation, you are asking to be fleeced. Traditional agents (people), however, are expensive, and their role as honest brokers has often been eroded when they are paid by the seller, not the buyer.

Technology can solve this problem. It is now a very simple task to design an intelligent agent that scours the market  on behalf of a consumer, inviting bids and accepting them, based on criteria that its master has specified.

Here’s how it might work in the utility market.

END_OF_DOCUMENT_TOKEN_TO_BE_REPLACED

Newt Gingrich has just released a half-hour lecture on US energy policy. 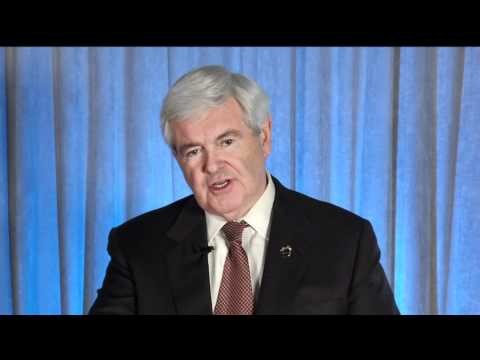 To say, the ex-speaker is bullish on US domestic energy prospects is an understatement. He sets four objectives: (i) zero dependence on imported energy from potentially hostile states (Saudi Arabia, Iraq, Iran, Venezuela, etc); (ii) over a million additional high-paid jobs in the energy sector; (iii) a strengthened dollar due to a reduction of energy imports and increase in exports; (iv) gas at $2.50 per gallon.

Newt’s vision is based on massive exploitation of what he believes are more or less unlimited unconventional oil and gas reserves. The US could have three times as much oil as Saudi Arabia, he argues, and gas for 100 years or more. The geopolitical consequences of this bounty will be striking. As President, he would have the Saudis firmly in his sights:

I want to get to a point where we produce so much oil in the United States that no American president will ever again bow to a Saudi King. I thought, frankly, it’s time that we tell the Saudis the truth: We know that they are the largest funders of schools called madrassas, which teach hate. We know that they spend several billion dollars a year exporting a very, very extreme version called Wahhabism, and we know that they are not straight with us.

And up until now, our presidents have been too cautious to say, “Oh gee, I don’t want to offend the Saudis. I don’t want them to do something with their oil supply.”

As is often the case, Newt has tapped deep into the Zeitgeist by choosing today to go large on energy. Talk to American policy makers and they have become incredibly bullish about the prospects for the domestic sector (although few, of course, rising to Gingrichian heights of enthusiasm).

Citigroup recently proclaimed the end of Peak Oil, triggering a debate on whether shale gas and tight oil prospects are fundamental game changers or whether they will have a more marginal – although still significant – impact (see Chris Nelder for example). No-one credible I have talked to would disagree that a shift of some kind is afoot.

Newt is also right to see potential geopolitical advantages for the US. American energy demand is fairly stable and its domestic endowment is growing. In contrast, China and India face decades of rapidly increasing consumption of all natural resources. They also still have lots and lots of resource-hungry cities to build. Their transition is going to be much more tricky to handle.

The US also has leadership in key technologies (fracking, enhanced oil recovery, solar, even nuclear) that are increasingly valuable as energy demand grows. And it’s well-placed on food and land (although water is a big problem for some parts of the country).

Characteristically, of course, Gingrich overplays his hand (that’s his shtick). America sitting back while the Gulf implodes? Good luck with that. And market prices for oil – less so for gas – are set globally. Demand overseas will continue to drive the price the American consumer pays for gasoline at home: ‘oil isolationism’ is, and will remain, a fantasy.

And, of course, climate change does not get a mention in Gingrich’s current world view (although it used to), even though new fossil fuel discoveries are putting huge amounts of new carbon in play. That is not a problem that can be ignored ad infinitum.

I’m expecting Newt’s energy fervour to be much mocked, but don’t bet against him getting some momentum too. And the mood could spread. We might see quite a lot more bullish talk on energy in the American presidential debate.

Update: Just reading the transcript, one misses some of the glory of Newt’s delivery, which is Pinteresque at times: “Under President Obama, because he is so anti‑American [pause] energy, we have actually had a 40 percent reduction in development of oil offshore.”

Update II: The Onion weighs in:

As Newt Gingrich continues to cede ground to Rick Santorum, the former House speaker’s campaign team has responded by advising him to stay focused on the belligerent, mean-spirited message that has long been the hallmark of his presidential run, sources confirmed Monday.

“Newt’s rhetoric can become abstract and idiosyncratic at times, and we have to gently remind him that he just needs to be himself, to be the Newt people are familiar with—the Newt devoid of any discernible scruple beyond his own insatiable instinct for self-promotion,” campaign director Michael Krull said Friday, explaining that whatever lies at Gingrich’s cold, depraved core is what will make or break him with voters. “Every time he veers off course and talks passionately about about outer space or how the United States has to stop spending beyond its means, I tell him, ‘Look, your greatest asset is being a remorseless asshole.”

– With the news that President Obama has nominated Ben Bernanke for a second term, over at the New Republic Noam Scheiber assesses the merits of continuity at the Fed. Stephen Roach, meanwhile, examines the case against the incumbent chairman, arguing that Obama’s decision should open a “broader debate over the conduct and role of US monetary policy”.

– Taking us back to the depths of last September’s financial meltdown, Faisal Islam has some interesting insights into the collapse of Lehman Brothers as viewed from British shores.

– Elsewhere, debate continues apace about the rights and wrongs of releasing the Lockerbie bomber. Suggesting that “cock-up offers as convincing an explanation as conspiracy for the handling of Mr Megrahi’s release”, Philip Stephens argues that the decision highlights the “price of realism” in foreign policy.

– Speaking of which, in the latest edition of FP Magazine none other than Paul Wolfowitz assesses the realist credentials of President Obama; providing at once a telling insight into the mindset of a man at the heart of foreign policy making during the Bush years.

– Mark Easton’s BBC blog, meanwhile, takes a look at how the British government is looking to influence public behaviour in light of the Chief Scientist’s warning of a “perfect storm” of energy, food and water scarcity by 2030.

– Finally, as President Obama holidays on Martha’s Vineyard, the White House announces what he’ll be reading on the beach. Slate offers its take here.

A loss for @BBCWorld and coverage of Africa, but a brave decision by one of the best journalists in foreign affairs - ⁦@fergalkeane47⁩ thetimes.co.uk/article/bbc-wa…

The work isn't done, but it is time to stop. #techsabbath

A man whose work on disruptive innovation has shaped my thinking and who mentored/taught a number of my mentors/teachers. May his memory be a blessing. deseret.com/faith/2020/1/2…