The new UN population projections were published to great fanfare last week, with much of the coverage focusing on a significant increase in overall estimates from the 2008 figures.

Pakistan, however, bucked the overall trend. It is now projected to have 60 million fewer people at mid-century, with its population peaking at 283 million in 2075. In the 2008 data, it was projected to hit that level by 2035 – a striking difference of 40 years. 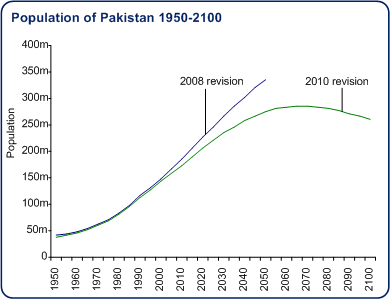 What gives? I have absolutely no idea. Pakistan has not had a census since 1998. As a result, much of the country’s data is based on extremely ropey projections over a nearly 15 year period.

But somehow the United Nations has managed to make significant changes to its data for Pakistan (oddly population figures revised downwards all the way back to 1950). What gives?