Tomorrow sees the launch of a new Center on International Cooperation report on the subject of international institutions and climate change, co-authored by David and me (see also this story on the report in tomorrow’s Guardian).

When we were commissioned to do the paper a few months ago by the UK Department for International Development, it quickly struck us that although the world has invested a massive amount of time and money in understanding both the science and the economics of climate change, we’re a long way behind in thinking through the kind of institutions that we’ll need in order to tackle the issue successfully.

It’s a strange oversight, when you think about it: after all, the challenge of climate change is above all one of leadership, of co-ordination and collective action – all of which come straight back to the question of institutions. The report is therefore a intended as a small contribution to the nascent global discussion about the new kinds of institution we need to tackle a new kind of global challenge.

The paper starts by setting out three scenarios for how institutions evolve to manage climate change – with varying degrees of success – between the Copenhagen summit at the end of 2009 and the year 2030.  Subsequent sections turn to the drivers that underpin the scenarios; an assessment of the multilateralism that we have now and its inadequacies for dealing with climate change; an exploration of the multilateralism that we’ll need, in order to tackle climate change successfully; and finally, how we might chart a path towards it.

The report argues that the most important thing that global institutions must deliver in order to stabilise the climate is what we call “signals from the future”. What we mean by this is that the way countries, companies and citizens behave today fundamentally depends on what they expect to happen in the future – so institutions must shape those expectations towards the desired outcome, and create a positive, self-fulfilling prophecy.

For if countries, companies and citizens expect a slow, tortuous transition to a low-carbon world, then it makes sense for them to free-ride on emissions reductions undertaken by others, to hedge their bets, to slow the process down.  If, on the other hand, they expect the low-carbon transition to happen quickly, then the incentives are instead for them to lead the change – in effect, to take part in a race to get out of carbon.  It’s either a virtous spiral or a vicious circle, in short – and institutions are the factor that can make the difference between the two. 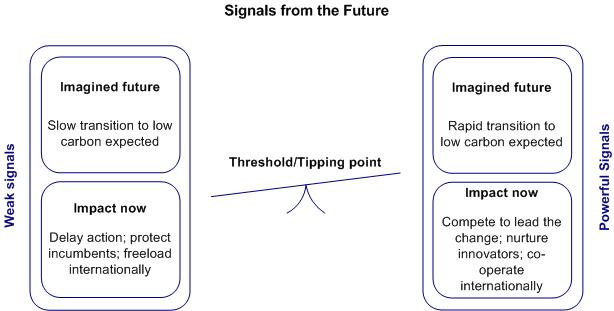 To be able to send such signals from the future, we argue that radical global institutional change will be needed.  We need a framework that manages climate change over the full term of the challenge, based on a scientifically derived stabilisation target; a transparent, equitable formula – an ‘algorithm’, as we think of it – for sharing the global carbon budget out between the world’s nations; and a far more rigorous compliance and enforcement regime than the one agreed for Kyoto.  As we argue in the report,

It seems inevitable that a long-term climate deal will ultimately require an ‘all or nothing’ approach to international participation. Either countries play a full part in the system (and thus have access to international frameworks on finance, trade, development, energy and other resources, and perhaps even security); or they sit outside the international system and are effectively barred from all forms of international co-operation.

Carbon default, in other words, would be become as weighty an issue as sovereign default, or failure to comply with a Security Council resolution. That this should currently seem inconceivable indicates the extent of the shift in understanding that is still needed.