Chris Blattman is experiencing a moment of epiphany.  As he notes, Africa suffers from the fact that much of its road and rail infrastructure was built during colonial times, to shift raw materials from the interior to the outside world; there’s rather less infrastructure that runs between African countries, which makes regional trade a whole lot harder.  So, Blattman continues,

What is a poor landlocked country to do? There was a time when I imagined roads, rail and regional integration were the answer. Now I know I dream too small. I need to dream like… an engineer. 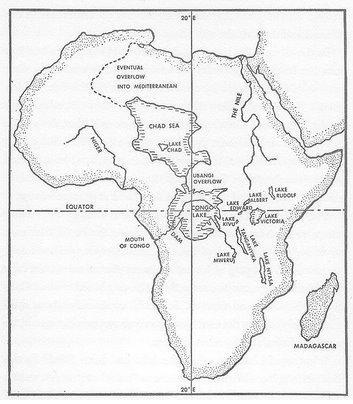 The map comes from a 1954 book that Blattman has discovered, entitled Engineers’ Dreams: Great Projects That Could Come True. And lo, some of them actually have (like the Channel Tunnel).  But as for the concept depicted above, well, that was

a plan to totally reconfigure the interior of Africa by creating a series of huge inland seas. The plan was originated by the German architect and engineer Herman Sörgel in 1935. His plan was to dam the Congo River where it passes through a string of deep, narrow gorges after it merges with one of its tributaries, the Kwa River. It would create a lake 350,000 square miles in area – larger than the areas of California, Nevada and Oregon combined.

For Blattman, this leaves the question, “What were they going to do with all those Congolese and Chadians? Give them beach-side holiday properties? Millions of USAID water wings?”

As for me, I’m reflecting anew on the point explained to me by a friend at the British Embassy in Beijing, who explained to me  few months ago that “what you have to understand about Chinese government is that it’s run not by political scientists and lawyers, as in Britain, but by engineers“.