Doug Short has put together this depressing chart comparing three previous bear markets, with the current financial meltdown. Have a look at the grey (1929 and great depression) and blue (today) lines – and you’ll see that US markets have now declined about as far and as fast as they did in the 1930s.

If this was the thirties, however, the bottom would still be more than 600 ‘market days’ away… 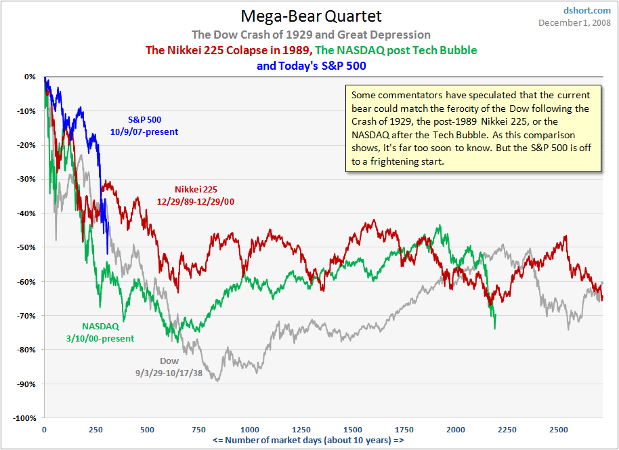 So will things be as bad again this time? John Carney reckons that the market has now reached ‘fair value’ but the price declines could “continue for another decade or so, during which stocks will occasionally become truly cheap.” Japan’s stock market, remember, recently hit its lowest point since 1982 – and has been in decline for almost twenty years.

But I am not making any predictions – unlike the saintlike Warren Buffet who, six weeks or so ago, used the New York Times to urge investors to plough any spare cash into stocks and shares. Major companies would be posting record profits in 5 years, he said – so now was the time to buy:

Today people who hold cash equivalents feel comfortable. They shouldn’t. They have opted for a terrible long-term asset, one that pays virtually nothing and is certain to depreciate in value. Indeed, the policies that government will follow in its efforts to alleviate the current crisis will probably prove inflationary and therefore accelerate declines in the real value of cash accounts.

Equities will almost certainly outperform cash over the next decade, probably by a substantial degree. Those investors who cling now to cash are betting they can efficiently time their move away from it later. In waiting for the comfort of good news, they are ignoring Wayne Gretzky’s advice: “I skate to where the puck is going to be, not to where it has been.”

Buffet is richer – and more revered – than God, so his words carry a lot of weight. Here in the UK, his advice was picked up by tabloids, who passed it on to their less than sophisticated investors. Let’s hope that they realise that when the great man says ‘long-term’ – he really means ‘long-term’. They should be prepared for wait for ten years, or perhaps longer, before they cash in. 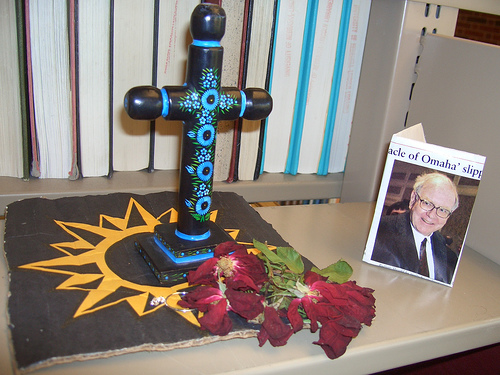 Also wouldn’t it have been a good idea for Buffet to have been a little more upfront about how much money he stands to lose if equities don’t recover? Last year, our Warren bet $37bn – yes thirty seven billion dollars – that US and world markets would be higher than they were then in 15-20 years time.

Given that he’s 20% or so down at the moment, that seems like a pretty big conflict of interest to me…

(photo under a cc license from flickr user swearinglibrarian)

Update – I was much nicer about Buffet here…