It’s developed country, not emerging economy, attitudes that are the problem on sustainability

One of the best sets of data available on attitudes to sustainability around the world is the ‘Greendex’ produced by the polling company Globescan for National Geographic magazine. Its most recent version, published in 2012 (highlights; full pdf), paints a fascinating – and often surprising – picture.

For me, the key headline finding from the survey is all about the gap in perceptions between people in emerging economies and those in developed countries. Despite the fact that emerging economy citizens have much lower per capita consumption levels, the survey found that: 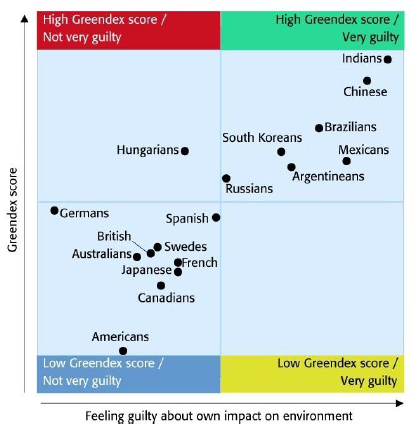 A similar story emerges on the specific issue of climate change. Of the 17 countries covered in the Greendex survey, the six in which most concern is expressed about climate change are Mexico, South Korea, Brazil, Argentina, India, and China, with over 70% of people in each country saying that they are either concerned or very concerned about the issue. Britain, America, and Australia, on the other hand, rank  lowest, in every case with less than 45% of people in these two categories.

People in emerging economies are also much more likely to agree that “global warming will worsen my way of life within my own lifetime” than those in developed countries, and to support the statement that “most scientists are convinced that human activity causes climate change and global warming”.

How much land would be needed if all 7 billion of the world’s people had the average living standards of each of the countries shown. From Explorer.

Climate, scarcity and sustainability are among the most important – and politically challenging – elements of the post-2015 development agenda on what should succeed the Millennium Development Goals.

While sustainability issues did not feature heavily at the recent London meeting of the new UN High Level Panel on the Post-2015 Development Agenda, which was focused mainly on household level poverty, they are likely to figure much more prominently at the Panel’s second and third meetings – in Monrovia in February and Bali in March – since these meetings will focus on national and global level issues respectively.

Before these meetings, sustainability advocates have some hard thinking to do: on both their policy objectives and their political tactics, in both the Panel and the post-2015 agenda as a whole. To try to contribute to that thought process, here’s a 6 page think piece. It’s deliberately provocative, and also still a working draft – so feedback is very welcome.

Update: The paper’s now been finalised and published as a Center on International Cooperation think piece; many thanks to everyone who commented.

Climate, Scarcity and Sustainability in the Post-2015 Development Agenda

What should sustainability advocates aim for in the post-2015 international development agenda – and how should they go about it?