The woman who would be President 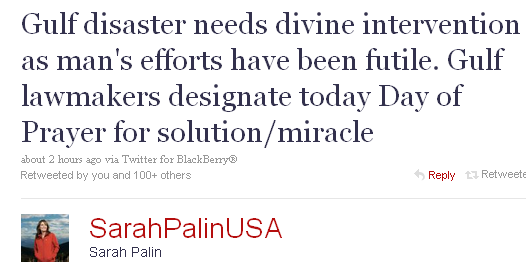 Will START get ratified?

I’ve been wondering whether the new US-Russia nuclear pact is a cert for ratification (it needs 67 votes to get through the Senate). If this treaty (uncontroversial as it is) was rejected by Republicans, it would raise serious questions about whether the US can any longer be regarded as a coherent foreign policy actor.

Asked about this, President Obama sounds reasonably confident that all will run smoothly. He also has harsh words for Sarah Palin too, who has suggested that American citizens would ‘rise up’ against his ‘unbelievable’ and ‘unacceptable’ nuclear posture (great cartoon version of her oratory, here).

STEPHANOPOULOS: So, you have no doubt you’re going to get the eight Republicans you need to ratify this treaty?

OBAMA: Well, you know, the — listen, I’ve now been in Washington for long enough that, for me to say I have no doubt (LAUGHS) about how the Senate operates would be foolish. I feel confident that leaders like Dick Lugar — who actually was somebody I worked very closely with when I was in the Senate on issues of bomb control — when they have had the opportunity to fully evaluate this treaty, [they] will come to the conclusion that this is in the best interest of the United States. But I will also say to those in the Senate who have questions, is that this is absolutely vital for us to deal with the broader issues of nuclear proliferation, that are probably the number one threat that we face in the future.

STEPHANOPOULOS: I want to get to some of those broader issues. Because you’re also facing criticism on that. Sarah Palin, taking aim at your decision to restrict the use of nuclear weapons. Your pledge not to strike nations, non-nuclear nations, who abide by the nonproliferation treaty. Here’s what she said. She said, “It’s unbelievable, no other administration would do it.” And then she likened it to kids on the playground. She said you’re like a kid who says, “Punch me in the face, and I’m not going to retaliate.” Your response?

OBAMA: I really have no response. Because last I checked, Sarah Palin’s not much of an expert on nuclear issues.

STEPHANOPOULOS: But the string of criticism has been out there among other Republicans as well. They think you’re restricting use of nuclear weapons too much.

OBAMA: And what I would say to them is that if the secretary of defense and the chairman of the Joints Chiefs of Staff are comfortable with it, I’m probably going to take my advice from them and not from Sarah Palin.

STEPHANOPOULOS: But not concerned about her criticisms?

First, other governments will now be well aware that is becoming increasingly hard for the American political system to make major decisions.

None of their analysts predicted that health care would drag on so long – or make it so hard for the Obama administration to focus on its crowded foreign agenda. Financial regulation, climate change, and nuclear proliferation have all been forced to take a back seat to domestic policy.

And the logjam is sure to continue. Due to the vastly increased use of the filibuster, American presidents will govern with what is effectively a permanent hung parliament.

Reform is badly needed if the US is to remain a decisive voice on the world stage. It is on the cards – but it looks to me like a distant prospect.

Bush speechwriter, David Frum (of axis of evil fame) may argue that Republicans made a strategic mistake in trying to make healthcare Obama’s Waterloo, but he’s an isolated voice on the right.

Here’s our friend, Mark Steyn, with a view that is much more reflective of the anti-healthcare mainstream:

It’s a huge transformative event in Americans’ view of themselves and of the role of government..

More prosaically, it’s also unaffordable. That’s why one of the first things that middle-rank powers abandon once they go down this road is a global military capability…

Longer wait times, fewer doctors, more bureaucracy, massive IRS expansion, explosive debt, the end of the Pax Americana, and global Armageddon. Must try to look on the bright side . . .

Healthcare is not the cause of US political divisions, simply the latest reflection of them. Pick an issue – Iran, Israel, energy, climate, even China – and you see similarly deep chasms. Make any long-term deal with America and you have to be prepared for a new administration to come along that has a diametrically opposed world view.

Third, it’s clear that much of the healthcare debate were being driven by forces inaccessible to the mainstream media or to elite opinion.

Take this video asking those demonstrating against healthcare why they’re opposed to reform:

Sure, the editing slanted to make these protestors look as dumb as possible, but notice the memes that recur – that the bill will lead to the elderly being euthanized with a ‘little pill’ for example.

Canny populist leaders, Sarah Palin for one, have been adept at fuelling these fears – but they don’t control them. People’s views are now shaped more by email chains, chat rooms and bulletin boards, and talk radio, than by more established communications channels.

This is tough for domestic policymakers, but even harder for the foreign policy priesthood which continues to believe it controls key policy debates. Increasingly, it doesn’t.

Fourth, change on most important issues is going to be increasingly hard and time-consuming to achieve.

The Obama administration seriously underestimated the effort that healthcare reform was going to take. This applies equally to key global risks. As Bruce Jones, Alex and I argued in our recent paper for Brookings, The Long Crisis:

On any complex international issue, transformation will be ‘sticky’ with considerable force needed to push the system from one equilibrium to another…

Those governments that aspire to global leadership also need to develop a new appreciation of how to influence and organize for change.

They must invest in the skills needed to bring together diverse networks of foreign policy actors – including publics, international organizations and other non-state actors – in frameworks that allow them to manage global risks.

In other words, governments need to stop believing that they can achieve change on the cheap. A massive, and coordinated, shift is needed in the way that countries do foreign policy if they are to achieve any meaningful results at all.

Finally, the healthcare bill itself provides an interesting model of the compromises needed to deliver radical change.

Ezra Klein – for my money the best navigator to healthcare’s complexity (and what is he going to do with his life now?) captures the balance well [emphasis added]:

The legislation builds a near-universal health-care system, but it only uses the materials that our system has laying around. It leaves private insurers as the first line of coverage provision, but imposes a new set of rules so that we can live with — and maybe even benefit from — their competition.

On global issues, we need a similar approach, blending strategic ambition with tactical bricolage, repurposing and reincentivizing existing institutions and structures, thus allowing them to deliver new outcomes, however imperfectly.

Ultimately, healthcare rested on two leaders – Obama and Pelosi – maintaining a common purpose despite having only partially aligned incentives. On most global issues, a handful of leaders (less than half a dozen) will need to create a similarly high-bandwidth platform for driving change. It happened during the acute phase of the financial crisis, but probably hasn’t since.

Update: Laura Rosen argues that foreign leaders – she means you, Bibi – will now be confronted by an empowered Obama. Steve Benen:

Global players base their U.S. interactions, at least in part, on their perceptions of presidential standing. If the American head of state is perceived as weak — faltering domestic support, stalled legislative agenda — friend and foe alike will take those cues seriously. If the chief executive is perceived as strong, that matters, too.

Gov. Sarah Palin will resign her office in a few weeks, she said during a news conference at her Wasilla home Friday morning. Lt. Gov. Sean Parnell will be inaugurated at the Governor’s Picnic at Pioneer Park in Fairbanks on Saturday, July 25, Palin said.

There was no immediate word as to why she will resign, though speculation has been rampant that the former vice presidential candidate is gearing up for a run at the 2012 Republican presidential nomination.

Palin is making a terrible mistake. The lure of the national spotlight is strong, and the day-to-day challenges associated with running the executive branch of a state are no doubt difficult. There are probably plenty of far-right activists and donors whispering in Palin’s ear, telling her to ignore the naysayers and realize she’s ready to lead the nation, but she’s listening to the wrong people. Walking away from the governor’s office after one term is incredibly foolish — but walking away from the governor’s office after two and a half years in office is stupefying.

But the best comment (predating today’s announcement) is from conservative blogger Reihan Salam, who according to Benen “defended Palin repeatedly over the last several months, making excuses for her shortcomings, and arguing valiantly that Palin is a credible national figure” before reluctantly giving up:

Palin’s campaign antics can be forgiven. What can’t be forgiven is the ham-handed way she’s tried to build her national profile since she returned to Alaska. She’s abandoned the bold right-left populism that won over Alaska voters — and me — in the first place in favor of an increasingly defensive and harsh partisanship…. One can’t help but get the impression that Palin is a clownish, vindictive amateur…. What I’m wondering is: Has Sarah Palin undergone some kind of secret lobotomy?