“Every year they voted to be kept in the dark”

Hard to argue with this one from Monbiot:

Call me a hard-hearted bastard, but I’m finding it difficult to summon up the sympathy demanded by the institutional investors now threatening to sue BP. They claim that the company inflated its share price by misrepresenting its safety record. I don’t know whether this is true, but I do know that the investors did all they could not to find out. They have just been presented with the bill for the years they spent shouting down anyone who questioned the company.

They might not have been warned by BP, but they were warned repeatedly by environmental groups and ethical investment funds. Every year, at BP’s annual general meetings, they were invited to ask the firm to provide more information about the environmental and social risks it was taking. Every year they voted instead for BP to keep them in the dark. While relying on this company for a disproportionate share of their income (BP pays 12% of all UK firms’ dividends), they refused to hold it to account.

It’s not as if the warning signs were hard to spot. One of them is splashed across the front page of BP’s 2009 annual review: the title is “Operating at the energy frontiers”. Like all multinational oil companies, BP has been shut out of the easy fields by the decline of its old reserves and the rising power of state-owned companies. So, to keep the money flowing, BP takes risks that other companies won’t contemplate. “Risk,” the review states, “remains a key issue for every business, but at BP it is fundamental to what we do. We operate at the frontiers of the energy industry, in an environment where attitude to risk is key … We continue to show our ability to take on and manage risk, doing the difficult things that others either can’t do or choose not to do.” 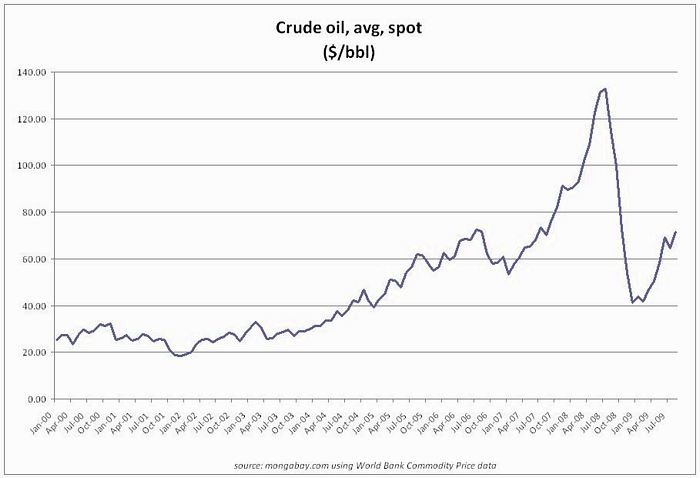 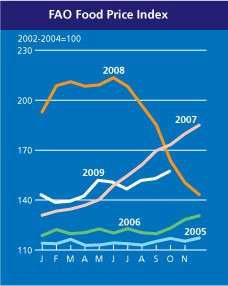 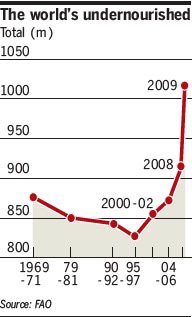 END_OF_DOCUMENT_TOKEN_TO_BE_REPLACED

Q: Why’s the dollar in freefall? A: Robert Fisk.

Tumultuous times for the dollar this week. Gold has hit an all-time high three days in a row (this morning it’s at $1,045  troy ounce – it was only $990 on 29 September) while WTI oil is up at $71.50 a barrel todaycompared to $66 just over a week ago – both commodities head upwards when the greenback’s going the other way. So what was going on? Over to the NYT for the stocks and bonds report in Wednesday’s paper:

Investors clamored to buy pretty much anything on Tuesday — as long as it was not the dollar. A seven-month slide in the value of the dollar gained force as investors migrated to other markets and fretted over a report that crude oil could one day be priced in other currencies, hobbling the dollar’s role as a vehicle for global trade.

Whatever would give investors that idea, you wonder? Answer:

A report on Tuesday in The Independent, a British newspaper, suggested that China, France, Japan and Russia were in secret talks with Persian Gulf countries to abandon the dollar for international trade in oil and replace it with a basket of currencies and gold.

The Independent appears to have rocked the world on Tuesday with its Robert Fisk exclusive exposing a secret plot by international central banks to topple the US dollar.

So what on earth did he say that managed to move markets on the other side of the Atlantic?

END_OF_DOCUMENT_TOKEN_TO_BE_REPLACED

Here’s an intriguing thought: Global oil supplies are indeed set to peak within a few years, and no, that is not bullish for oil. Quite the contrary—it will spell the end of the “oil age.”

That’s the take from Deutsche Bank’s new report, “The Peak Oil Market.” In a nutshell: The oil industry chronically under invests in finding new supplies, exemplified both by Big Oil’s recent love of share buybacks and under-investment by big oil-producing nations. That spells a looming supply crunch.

That will send oil to $175 a barrel by 2016—and will simultaneously put the final nail in oil’s coffin and send prices plummeting back to $70 by 2030. That’s because there’s an even more important “peak” moment on the horizon: A global peak in oil demand. That has already begun in the world’s biggest oil-consuming nation, Deutsche Bank notes:

US demand is the key. It is the last market-priced, oil inefficient, major oil consumer. We believe Obama’s environmental agenda, the bankruptcy of the US auto industry, the war in Iraq, and global oil supply challenges have dovetailed to spell the end of the oil era.

The big driver? The coming-of-age of electric and hybrid vehicles, which promise massive fuel-economy gains for short-hop commuting but which so far have not been economic.

Deutsche Bank expects the electric car to become a truly “disruptive technology” which takes off around the world, sending demand for gasoline into an “inexorable and accelerating decline.”

Is a peak for global oil demand in sight, wonders the Guardian’s Data Blog this morning? Er, no – what might make them think that, you wonder? Answer: a new Greenpeace report called Shifting Sands, which argues that the case for developing tar sands in Canada is rapidly diminishing as oil demand falls.  The report pulls together demand forecasts from OPEC and IEA, and argues that on top of the effects of the recession,

“In the longer term, the impact of two key policy instruments adopted in the US and EU are cited as gaining in influence. These are the US Energy Independence and Security Act and the EU Climate and Energy package. These policies, and the fact that there has been a degree of  saturation in these markets, have led to the unanimous conclusion among these agencies that oil demand in the OECD has peaked.”

OECD, schm-OECD! They’re beside the point!  Let’s remind ourselves of what the last IEA Outlook report actually said:

Global primary demand for oil (excluding biofuels) rises by 1% per year on average [in the report’s Reference Scenario], from 85 million barrels per day in 2007 to 106 mb/d in 2030 … all of the projected increase in world oil demand comes from non-OECD countries.

It is entirely true to point out, as Greenpeace do, that investment in tar sands has fallen off a cliff as oil prices have crashed from $147 last July to their current level of around $60, and that investor uncertainty over future demand is the big driver here.

But to go from there to talking about a peak in world oil demand? I wish.