One lesson I took from from the Northern Irish peace process was that, when building a complex agreement, trouble results if any party forgets this rule: the first negotiation is with your own base.

Sinn Féin has emphasised that it is involved in a double negotiation – with its political opponents on the one hand, and with its supporters on the other. ‘For the IRA’s position to have been released or made public without its grassroots having had the opportunity to engage … would have been a total disaster,’ Gerry Adams has argued.

But David Trimble failed to keep his base on side, leading to a long period where Unionists were unable to project a credible position at the negotiating table. Their leaders weren’t taken seriously, because no-one could be sure who they were really speaking for.

Back in 2003, the British government was terrified that stalemate was allowing Ian Paisley’s hard liners to grab power – expecting this to lead to a titanic (and fruitless) ‘battle of the bottom lines’. Their pessimism was misplaced. The DUP was able to advance the talks, precisely because it had a much firmer bond with its own supporters.

How does this lesson apply to today’s post-election shake out in the UK?

Nick Clegg has been forced to by his party’s constitution to keep in close contact with his party – he needs 75% of MPs and 75% of the federal executive to approve any deal. He also went out onto the streets to talk directly to demonstrators backing PR. 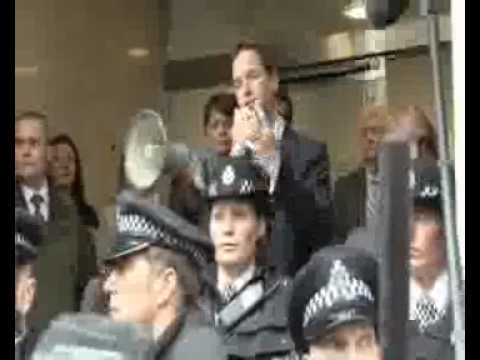 Clegg may end up failing to take his party with him – but at least he seems to be trying to keep them on board.

David Cameron, however, seems much more isolated. The Guardian, of course, has an enormous incentive to sow dissent on Tory ranks (it badly wants a Lib-Lab pact that leads to PR), but its account of rebellion within the Conservative Party has a ring of truth about it.

Most damaging was that not all the dissent came from the backbench MPs (who are said to have heard little from their whips). One ‘senior frontbencher’ was prepared to dish the dirt (off the record, of course):

He ran his campaign from the back of his Jaguar with a smug, smarmy little clique – people like Osborne, [Oliver] Letwin and Michael Gove. He should get rid of all of them. The party will settle for nothing less.

For Cameron, there’s an enormous attraction in binding his enemies, the Lib Dems (or as Alex prefers, ‘the frenemy‘) into a formal coalition. He can dump unpopular policies foisted on him by the grass roots, implicate his coalition partners in all the hard decisions about spending, and leave the Lib Dems too unpopular to ever win the argument on PR.

But he is making a big mistake if he gets out too far in front of his party. He’s going to need every single of his MPs to back his first Queen’s Speech. And he’ll then be vulnerable to any subsequent rebellion turning into a confidence issue.

And what about Labour? I wonder if here, too, the interests of the ruling Brownite clan diverge from those of a (currently silent) faction in the party.

Assume Brown goes, I simply cannot see how a new leader will have any legitimacy to lead a Lib-Lab coalition and take power as PM. For a start, there’d be a messy and lengthy succession process. After that the new leader would be damaged goods from the get-go – tarred with the ‘unelected’ brush that so damaged his (or her?) predecessor.

Maybe, maybe, they might hope to wait out the storm that would accompany them taking office and wait for better economic times to heal the wounds – but they’d have a referendum on PR to fight, and that – as I argued last week – could well get ugly.

Surely better to head into opposition with a decent share of the seats and fight a government that – whether its Tory minority or LibCon – will struggle with some of the hardest political decisions of a generation.

If only all funders thought (and acted) like this... twitter.com/EmRoseBaz/stat…

A career in smuggling has never looked easier. twitter.com/JohnJCrace/sta…

Thanks to @ipinst for a fascinating day discussing their proposed index on #multilateralism. twitter.com/ipinst/status/…