What goes around doesn’t come around 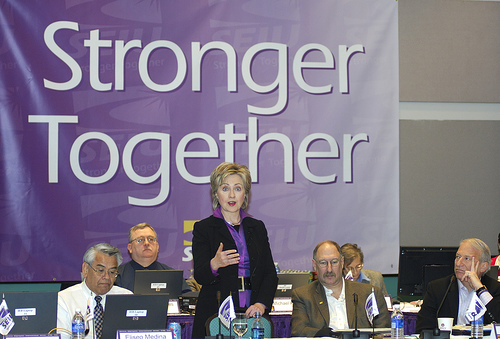 So where does Hillary Clinton’s foreign policy cabinet hang its hat for the next four years?
Her main team consists of:

Now — signing up for Team Obama, especially when things were not looking so hot in late 2007, was a real act of professional courage for many Obamaites. And there was quite a bit of tension between the two camps — although it’s not clear whether the principals listed above were involved.

Tensions have cooled; Clinton advisers are assisting Obama’s transition team and serving on several advisory committees. But staff is destiny, and there are conflicting reports about how much latitude Clinton will have to bring her own team aboard.

I’d say Ambinder underplays the irony of the situation.  As Alex noted over a year ago, the Clinton camp let it be known that no foreign policy expert associated with Obama’s primary campaign would be welcome to change sides once Hillary won her inevitable nomination.

Team Clinton has put the word out that the usual process – whereby foreign policy advisers to other candidates are allowed to switch horses as and when their candidate gets eliminated during primary season – has been abolished, at least as far as Hillary as concerned. The ‘you’re with us or against us’ ethos is no longer limited to the GOP, it seems…