When I was young, naive and ignorant both of humanity’s complexity and my own limitations, I believed I would one day save the world. Once I reached adulthood, I thought, the willpower and abilities I possessed would be sufficient to wipe out poverty and put an end to conflict.

Then I grew up. I slowly realised that the world was not for saving, much less by one individual, and least of all by me. As I studied history, I realised too that the only people who still believed they could save the world having reached adulthood were dictators or madmen, and that their efforts always ended in failure.

It turns out, however, that I grew cynical too soon, and that in reality it is possible for one man to save the world, or at least a large part of it. Tony Blair, the former British prime minister, believes that he has singlehandedly rescued Africa from poverty and underdevelopment. In an article on the Guardian website which must be either a push for a Nobel Prize or a pitch for a job at the UN or World Bank, he argues that all of the recent socio-economic improvements that have taken place in Africa resulted from his own focus on increasing international aid (he has nothing to say about the many African countries that have yet to see any improvement).

The beginning of Africa’s salvation, Blair claims, came at the Gleneagles G8 summit which Britain hosted in 2005. His role in the summit was crucial for Africa. As he reports:

Summits with genuine, long-lasting outcomes are rare. But as we started planning for the Gleneagles G8 meeting in 2005, I saw that it could be one of these rare ones – a summit about changing the world…

I decided to put Africa at the top of the agenda for Gleneagles…And it worked. Today, the positive legacy of that summit is still being felt across Africa: aid was doubled and developing world debt dropped.

Now an increase in aid is not, of course, an end in itself. Large quantities of aid given to Africa over the decades have been squandered on entrenching corrupt elites or padding the overseas bank accounts of dictators, with little impact on the quality of life of ordinary Africans. Gleneagles, however, not only increased the quantity of aid; it apparently dramatically increased its effectiveness. Here is Blair again:

I want to answer the aid sceptics – those who think aid doesn’t work or is all swallowed up in corruption. Look at the facts. In Africa since 2005, the rate of children dying before their fifth birthday has fallen by 18%. The proportion of people in Africa living in extreme poverty is down by nearly 10%.

It is undeniable that the latter two sentences are facts, but Blair offers no evidence that they have anything to do with an increase in aid. That they might have had more to do with increased investment in and trade with Africa by China, remittances and ideas sent from the diaspora, high commodity prices, or anything Africans living in Africa might have done is a possibility Blair is either unaware of or, because it does not fit with his messianic self-image, has no interest in highlighting. He even takes the credit for foreign investment. He writes:

Africa is among the fastest-growing regions in the world. The Gleneagles agreement can claim some credit for this; bilateral aid for trade to sub-Saharan Africa has almost doubled between 2005 and 2011. Foreign direct investment in the continent has increased by 87% in the past 10 years.

Again, no evidence is presented linking aid to fast growth – it is merely hoped that the juxtaposition of the two things will convince the unwary reader. Even Blair’s buddy Bob Geldof doesn’t have the chutzpah to attribute China’s growing influence in the continent to Gleneagles, admitting in an otherwise tub-thumping piece today (in which he refers to Africans as ‘the people you kept alive all those 30 years ago’ and to Africa’s success as ‘Blair’s lasting legacy’) that trade was not discussed at the Scottish summit. Blair, though, is in no doubt. ‘The last decade of development progress was defined by aid,’ he announces.

Blair does admit that despite his efforts Africa is not yet a utopia, and that improvements can still be made. Fortunately, he has the answers for these too. ‘After leaving office,’ he writes, ‘I set up the Africa Governance Initiative to continue my work on that forgotten half.’ The forgotten half refers to ‘the ability of governments in developing countries to get things done.’ In Blair’s world aid alone, or at least the aid he generated, has rescued Africa – the region’s governments have had nothing to do with it and like their people, who have thrived only since he decided to help them, can do little without his assistance.

Blair has one final piece of evidence, in case we remain unpersuaded that he is Africa’s saviour. ‘The very fact that people are still talking about Gleneagles eight years on shows that we were right to be ambitious, to change the debate.’ he writes. We will have to take his word for it that Gleneagles remains the talk of the town, and the argument that noise proves success is at least no flimsier than some of his other contentions. It’s certainly strong enough for the image-conscious Blair, who concludes his article by proclaiming that ‘the journey from Gleneagles to long-lasting development in Africa is not over [there was, it seems, no journey before the summit]. But Africa is on the move and if we keep going on the whole Gleneagles agenda…the continent will be transformed. So I’m proud to say that Gleneagles has turned out to be that rare thing – a summit that matters.’ If anywhere else in the world needs rescuing, they know who to call.

G8: what the markets think

Never mind what the commentariat thinks: for the real take on how the G8’s panning out, take a look at how the markets are reacting.  John Authers:

For currency traders, the G8 was notable solely for what was not said and for who was not there. Rhetoric suggested the summit would be the “high noon” for the dollar as a reserve currency, as China pushed for a more diversified anchor for foreign exchange.

But currencies are not even mentioned in the draft communiqué. China’s premier was not present for the discussions, thanks to trouble at home. The showdown on the dollar’s future did not happen. Rather than dancing to the tune of the world’s leaders, forex markets suffered a new wave of aversion to risk.

That wave started in the commodities market, where prices dipped sharply. The CRB index, a broad index of commodity prices, dropped to its lowest level since early May, pushing below its 200-day moving average – a strong signal that its rebound of the past few months was over. The CRB is down more than 12 per cent since it topped out last month and is 51 per cent below its high set last year. This implies that deflation – falling prices and stalled economic activity – is a much greater risk than the resurgent inflation that was being talked about only weeks ago.

Gold, an inflation hedge, fell 2.2 per cent and is now down more than 10 per cent since it hit $1,000 per ounce in February. In currencies, the Japanese yen, which gains when people are anxious, made dramatic and sudden gains against the dollar and the euro. This could increase pressure to intervene to keep the currency cheap.

These developments are alarming. The pendulum in the debate between inflationists and deflationists has swung back to the deflationists – at a point that inflation still looks the lesser evil. But at least risk aversion will help the dollar avoid further falls and delay the moment when it is replaced as a reserve currency.

What on earth is going on here?

The only reasonable interpretation is that our leaders are attempting to re-enact a scene from Michael Mann’s excellent 1930s gangster film Public Enemies (sample line: “how long does it take you to go through a bank?”).

Alex adds: well, given the gangsta hustla manner in which he arrived, it was clearly always going to end this way. I blame Putin. 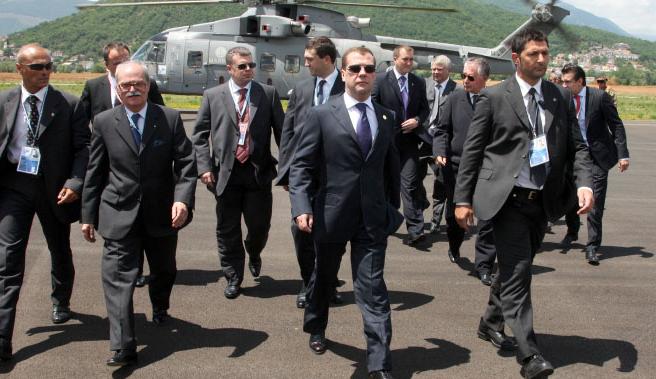 Italy: great in the G8 and on the plate

Further to Alex’s grovel below, it’s time for me to clarify my position on Italy’s place in the G8.  Yes, I was the one named source in the Guardian’s piece entitled “Calls grow within G8 to expel Italy as summit plans descend into chaos”, reproduced in almost every Italian newspaper and then some.  Yes, I called the Italian preparations for the G8 a “gigantic fudge” – ably translated “una buffonata colossale” by Corriere Della Sera.  And,  yes my boss Bruce Jones then gave a series of quotes broadly backing me.

However, let’s get one thing clear: neither Bruce nor I have at any point advocated chucking Italy out of the G8.  I for one think that it is a silly idea.

Sure, preparations for L’Aquila haven’t gone great.  But almost all G8 planning processes are a mess – some hosts just get luckier with the outcome documents than others.  The question of whether Italy should be there or not is a total distraction.  The real question is not which Europeans are at the G8 or G20, but how well they coordinate there.   As Bruce and I note in today’s European Voice, the record is mixed:

Europeans frequently fail to use their influence efficiently. The run-up to the London G20 summit was enlivened by intra-European spats, with French President Nicolas Sarkozy threatening to walk out if France’s interests were not satisfied. There was little real co-operation between the UK diplomats planning the G20 and their Italian counterparts on the G8.

Italian officials indicated that they would shape the G8 agenda to meet any requests from the Obama administration, but US officials complain that what they really want from the Europeans is some coherence – to allow more time bargaining with the Chinese and Indians, and to spend less time having to worry whether the Dutch or Italians [sorry Italians!] are on side.

What to do? We have a plan:

France will be Europe’s next G8 hosts, in 2011. It should start co-ordinating within the EU and with the Canadians, who host the 2010 G8, and the Americans, who take the reins in 2012, on how to deliver sleek, workmanlike summits that include China, India and other emerging powers as full partners – rather repeat the confusions of L’Aquila.

So there, we are constructive, nice people after all.  And pro-Italian.  I celebrated my new-found notoriety at the excellent Sorella on the Lower East Side.  Go there, New York-based readers and have the pate de fegato: