What can Southeast Asia teach Africa about development?

Southeast Asia has consistently outperformed Sub-Saharan Africa in income growth. As the below chart indicates, its inhabitants were much poorer than Africans in 1960; today they are two and one-half times richer. In fact, over the past half-century, the region has been the most consistently successful in the developing world, growing almost continuously (apart from a brief hiatus after the 1997 Asian financial crisis). 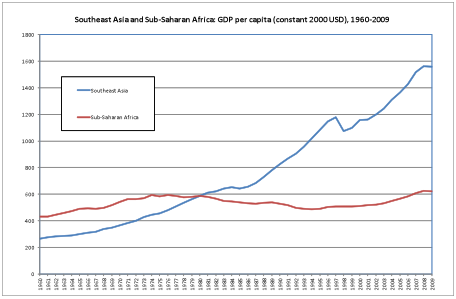 Southeast Asia’s growth has also been much more inclusive than Africa’s. Whereas the latter’s two growth spurts since independence—in the 1960s and 2000s—have yielded little poverty reduction, Southeast Asia has produced spectacular reductions. Indonesia, for instance, reduced poverty from 60 percent in 1970 to 22 percent in 1984. Vietnam reduced it from 58 percent in 1993 to 14 percent in 2008.

Yet, the region does not meet the standard model for economic success, at least as defined by the World Bank and the rest of the Western development community. Governments have historically not been held in check by elections. Corruption is widespread. Governance has rated low on most indicators.

What then explains this success? END_OF_DOCUMENT_TOKEN_TO_BE_REPLACED