The people of Sark “reap what they sow” – democracy in action

The Barclay twins – billionaire owners of the UK’s Telegraph newspapers and various other interests – are famously reclusive. So in the early 1990s, they bought the island of Brecqhou, which can be seen in the picture below from its (not much larger – it’s three miles long) neighbour Sark. 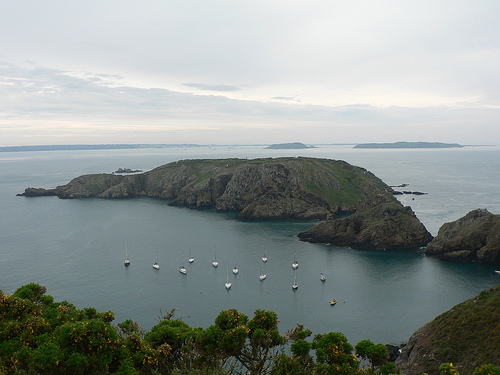 On Brecqhou, they built a huge castle, said to be the largest built in the 20th century, and at a cost of £60m or so. Sark’s inhabitants weren’t happy:

Round-the-clock construction is said to have polluted the pristine skies of the island, which has nary a streetlight, with a sodium glow. And size is its main architectural achievement; from the air it has been mistaken for a prison, and indeed the construction crew is said to have called it Alcatraz. One islander said of the brothers, “They have the taste of Saddam Hussein.”

In 1996, the Barclay brothers tried to declare Brecqhou’s independence. They took no services from Sark and travelled to and from their island by helicopter. They were said to resent visits from Sark’s police (when, say, a worker on their estate met an accidental death). They may also have been looking to more fully protect their financial affairs from scrutiny.

When their plans were frustrated, they began to lobby for replacement of Sark’s political system – often described as the last remants of feudalism in the Western world. Thus began a long legal battle, with the brothers fighting for what they describe as “modern democratic principles and the requirements of the European Convention on Human Rights.”

Meanwhile, they embarked on a buying spree, which saw them took control of large swathes of Sark itself. According to the FT, they bought hotels, shops, golf courses – and were said to be pushing for an end to the ban on cars (and helicopters) on the island.

Finally yesterday, Sark’s 474 voters headed to the polls for the island’s first ever democratic election (even Afghanistan didn’t have to wait so long). You can see what the islanders made of it here. The Telegraph’s Chief Reporter, Gordon Rayner was sent to cover this momentous event. The owners of his paper, he reported, had endorsed a slate of ‘reform’ candidates. They’d better get the result they wanted or there’d be trouble:

The Barclays, proprietors of Telegraph Media Group, feel so strongly about the future of Sark that they have threatened to withdraw their multi-million pound investments in the island if pro-reform candidates do not hold sway in the new parliament.

The Barclays have invested in hotels, property and agricultural land on Sark, employing around 140 people either directly or indirectly.

But all did not go according to plan. After each of the intricate ballot papers was read out aloud, in a session lasting ten hours or so, it became clear that the Barclay’s candidates had been heavily defeated – the ‘establishment’ had gained a clear majority of seats.

So how have the Barclays reacted? Well it seems they have done just what they threatened to do – immediately close down all their businesses, throwing about a sixth of the population out of work (the island has no welfare state). The twins’ lawyer told the BBC that:

The people of Sark are reaping what they sowed the day before. They only have themselves to blame. They could have co-operated with Barclays Investment but they chose to obstruct it. It was clear the Barclays were clear on their commitment to the island with support – they got no support at all.

Sark doesn’t appear to want or appreciate the Barclays’ investment and so it doesn’t have it. The island cannot at the same time treat the Barclay family in the way that it has and expect them to continue investing large sums of money into its economy.

Sark is going back to where it was before the Barclay brothers were there.

I just heard from a BBC reporter who was not expecting his hotel to be open when he got back to it. Sark’s voters have not come up with the ‘right’ democratic answer. And they’ll be punished, it seems…

I find it very hard, particularly at this time of year, not to wonder about the old saying to do with turkeys and whether or not they would vote for Christmas; well it seems we have our answer. I am genuinely saddened. The people of Sark have spoken.

Apparently the Barclays produced a newsletter characterising one of their opponents as a “feudal talibanist” and another as having a “socialist streak”. Can’t think why that didn’t go down well with Sark’s electorate…