The Return of Ethics: Panglossian Banking?

The financial crisis has led to a lot of talk about the failure of ethics in the banking sector. Greed overtook wisdom, we’re told. No doubt this is the case. Yet whilst bankers are to blame, it’s hopelessly naïve to suppose that a ‘return’ to some golden age of ethical business will solve all our problems.

There is a parallel with the expenses claims of British parliamentarians. Caught with their hands in the till, some cried out that the system was to blame for letting them get away with it. For all the cheek of that response, there is a lesson in it.

Individuals must take responsibility for their sins. But if we’re serious about making sure that these things cannot occur again, it really isn’t enough to call for more ethics in business. In fact, I’m beginning to suspect that this is a way to avoid having to enact any real change. As the crisis seems to be settling down, the British Chancellor of the Exchequer Alistair Darling has shied away from significant reform of the regulatory system and chose instead to blame bosses for being irresponsible. ‘Don’t worry,’ we seem to be being told, ‘we’ll just ask bankers not to be greedy any more.’ Forgive me, but I had hoped for something more robust.

It must be conceded that in sharp contrast to the plans of the British government, Barack Obama’s planned reforms are substantive and bold. But on a global level, concerns are growing that the opportunity for broader reform that this crisis provides is being missed as optimism returns alongside talk of ‘green shoots of recovery’. The Bank for International Settlements (BIS), often described as the central bankers’ central bank, published its annual report on Monday. According to the FT, the BIS:

said it was vital that thought be given to the ongoing structure of the financial system while the patient was still on life support. Efforts so far, it concluded, had been a “messy mixture of urgent treatment designed to stem the decline, combined with an emerging agenda for comprehensive reform to set the foundations for sustainable growth”.

It highlighted two main risks: first, that not enough will be done to ensure a durable recovery from crisis; and second, that the emergency action to stabilise the financial system will undermine efforts to build a safer system.

The G8, too, is jumping on board the ‘return to ethics’ bandwagon. MBA graduates have set up their own code of ethics, taking inspiration from the medical profession’s Hippocratic Oath. This is welcome. We do need to create a public environment in which ethics and responsibility are more emphasised (and more respected), but to expect a firm whose raison d’etre is the pursuit of profit to apply the brakes is painfully naïve. Business (and politics) should be conducted on more ethical grounds. This year’s Reith Lectures, given by Michael Sandel, address this point well. But in the meantime (between now and hell freezing over), we need rules that acknowledge people’s tendency to ignore ethics, especially in the heat of the moment. The great theorists of capitalism itself, such as Adam Smith, knew well that the system wasn’t moral. But neither is capitalism immoral – it’s simply amoral. If we want a moral system, we have to bring in the morality ourselves. But to expect bankers to do so on their own is to invite a conflict of interest. We do not expect the players at Wimbledon to make line calls on their own shots and, similarly, we should not expect the financial sector to judge the morality or wisdom of its own practices.

This is an important moment, but it’s not a moment of a new ethical kingdom, or of a new form of capitalism. Instead, we need to return to an older scepticism about the role of private interests in our society and the degree to which the doctrine of self-regulation is a realistic solution.

Export-led growth: not so resilient

As David just noted, this morning’s Lex column in the FT is relatively upbeat about the dangers of protectionism, arguing that “the disaggregation of global supply chains, the source of the huge efficiencies that companies pass on to consumers, will not be easily undone.”

Whether or not that’s right (and like Willem Buiter, Martin Wolf is also a good deal more downcast than the Lex team), it’s interesting to compare today’s Lex column with what they had to say about capital flows to emerging markets just a couple of days ago.  Here’s the bit that made me sit up:

Take Brazil and India, the globe’s ninth and 12th biggest economies, according to the International Monetary Fund’s latest estimates. While the developed world is expected to shrink by 2 per cent this year, the IMF reckons Brazil will grow by 2 per cent, and India by 5 per cent. Why? One answer is that they have stable banks, relatively closed economies, and large internal markets. This has insulated them from much of the global turmoil.

The contrast with East Asia is stark. Singapore’s economy shrank at an annualised 17 per cent rate at the end of last year, South Korea by some 20 per cent. Yet this is not for lack of capital. Asian economies, after all, are global creditors. Their economies have shrunk instead because they are heavily oriented towards collapsing international trade. Meanwhile, their local markets are undeveloped and weak. Asia’s challenge is how to best deploy its accumulated surpluses to boost domestic demand.

END_OF_DOCUMENT_TOKEN_TO_BE_REPLACED

Prepare to heave at this New York Times screed on how tough life is for bankers these days.

“Nobody in the investment banking world is expecting pity, or even a sympathetic ear, these days,” the article begins, before quoting banker after banker who not only feels  “unfairly singled out“, but wants destitute home owners to accept the lion’s share of the blame:

Financiers tell their not-for-attribution account of the mortgage crisis like this: Americans undersaved and overspent for decades, relying on rising property values to bankroll their lifestyles.

But nobody on Wall Street forced United States homeowners to take out loans on houses they couldn’t afford, or refinance mortgages to spend money on cars they shouldn’t have bought.

Of course, others are at fault too. Ratings agencies failed to warn innocent financiers of the risks they were taking, while regulators… well, they should be ashamed of their many failings. Bankers did just one thing wrong. They trusted us too much – and we let them down.

Now they are spat on as they cross the sidewalk from their limousines and are too embarrassed to admit what they do at champagne receptions. “I’d almost rather say I’m a pornographer,” says one poor soul. “At least that’s a business that people understand.”

Then there’s the last devasting blow – having their bonuses cut:

“Fact is that this is a terrible way to make a living — except for the money,” Ken Miller, a former vice chairman at Credit Suisse First Boston and now a private investor, said. “The lifestyle is terrible — the hours, the sucking up. These guys must feel like they’re the victims of a capricious god.”

Yes indeed, Ken, it seems they do.

What are we missing?

Over the past few weeks the UK government has been organising an extensive series of horizon scanning events to feed into the current revision of the National Security Strategy.  In all, some 24 workshops have been held on the full range of foreign policy issues; various other events have also been held, including the Wilton Park conference I mentioned a couple of weeks back.

Having been to a few of these events, I must admit to being less than convinced that the sessions are really breaking out of the comfortable groupthink that can so easily characterise futures work.  Like Charlie, I’m starting to feeling a sense of deja vu each time I attend an awayday or brainstorming session that concludes that emerging economies are, well, emerging; that resources are becoming more scarce; that everything’s interconnected; and so on.

I can see the utility of futures work that focuses on a pretty specific area – prospects for the pharmaceutical sector, say, or the future of UN peacekeeping – but I suspect that very big picture horizon scanning is only really helpful at this stage if it yields up insights or possibilities that are being ignored or overlooked.

For me, the really stand-out risk that barely got a mention in the events I attended was the possibility that serious erosion of states’ capacity and legitimacy undermines their ability to respond to all the global trends that we were discussing (viz. climate change, organised crime, economic meltdown, terrorism, energy scarcity – you know, the usual list).

Normally, when we think about state fragility we assume that we’re talking about the Lebanons, Somalias and Guinea-Bissaus of the world.  But as people who work in the counter-insurgency sphere have been pointing out for some time, the problem of erosion of state capacity is a whole lot more widespread than that.  END_OF_DOCUMENT_TOKEN_TO_BE_REPLACED

Who’ll bail out the IMF? 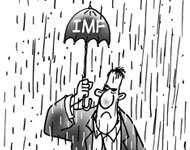 David Cameron yesterday warned that the UK could be forced to go cap in hand to the IMF, as it did in 1976 under chancellor Denis Healey. (This, by the way, at the launch of a new programme at Demos about ‘progressive conservatism’. Et tu, Demos?)

The question is, would the IMF have the cash. Click on more to read a story I recently wrote for my mag, www.emeafinance.com, which looks at the risk of the IMF running out of money in the next 18 months, and asks what the chances are of it receiving more funds from cash-rich G20 governments (answer: slim).