Here in Britain, one Christmas present arrives a few days late each year: the declassification of Cabinet papers that are then made available to the National Archive under the ‘Thirty Year Rule‘.  This year, the newly released documents are from 1978: the twilight period of Labour’s ill-fated Callaghan administration, famous for the ‘winter of discontent‘, when a torrent of industrial action meant that the rubbish went uncollected and the dead unburied.

You might suppose that it’s not the sort of anniversary that Gordon Brown will really want to be reminded of, not least given the obvious link back to Margaret Thatcher’s hugely successful election slogan of the time – ‘Labour isn’t working’ – and the fact that Callaghan’s administration had to go cap in hand to the IMF for a bailout.

But superficial similarities aside, the crucial difference between late 70s Britain and late 00s Britain is that during the former, the pendulum had swung all the way to the ‘state’ or ‘public’ end of the spectrum – whereas today, we find it right over at the ‘market’ or ‘private’ end.  Robert Skidelsky, writing in Prospect this month, refers to Arthur Schlesinger Jr’s The Cycles of American History, which describes this cyclical dynamic in detail:

[Schlesinger] defined a political economy cycle as “a continuing shift in national involvement between public purpose and private interest.” The swing he identified was between “liberal” (what we would call social democratic) and “conservative” epochs. The idea of the “crisis” is central. Liberal periods succumb to the corruption of power, as idealists yield to time-servers, and conservative arguments against rent-seeking excesses win the day. But the conservative era then succumbs to a corruption of money, as financiers and businessmen use the freedom of de-regulation to rip off the public. A crisis of under-regulated markets presages the return to a liberal era.

As Skidelsky summarises, the 1870s saw the pendulum start to swing towards collectivism on the back of a global depression triggered by a collapse in food prices. Most industrialised countries began to raise tariffs; social protection systems were rapidly rolled out (although not in the US).  The great depression of 1929-32 accelerated the process as Keynesian economics became orthodox.  But by the 1970s, the pendulum was about to swing the other way, as governments pursued “free trade abroad and social democracy at home”:

The crisis of liberalism, or social democracy, unfolded with stagflation and ungovernability in the 1970s. It broadly fits Schlesinger’s notion of the “corruption of power.” The Keynesian/social democratic policymakers succumbed to hubris, an intellectual corruption which convinced them that they possessed the knowledge and the tools to manage and control the economy and society from the top. This was the malady against which Hayek inveighed in his classic The Road to Serfdom (1944). The attempt in the 1970s to control inflation by wage and price controls led directly to a “crisis of governability,” as trade unions, particularly in Britain, refused to accept them.

Large state subsidies to producer groups, both public and private, fed the typical corruptions of behaviour identified by the new right: rent-seeking, moral hazard, free-riding. Palpable evidence of government failure obliterated memories of market failure. The new generation of economists abandoned Keynes and, with the help of sophisticated mathematics, reinvented the classical economics of the self-correcting market. Battered by the crises of the 1970s, governments caved in to the “inevitability” of free market forces. The swing-back became worldwide with the collapse of communism.

But today, Skidelsky notes, the crisis is that of conservatism:

The financial crisis has brought to a head a growing dissatisfaction with the corruption of money. Neo-conservatism has sought to justify fabulous rewards to a financial plutocracy while median incomes stagnate or even fall; in the name of efficiency it has promoted the off-shoring of millions of jobs, the undermining of national communities, and the rape of nature. Such a system needs to be fabulously successful to command allegiance. Spectacular failure is bound to discredit it.

The situation we are in now thus puts into question the speed and direction of progress. Will there be a pause for thought, or will we continue much as before after a cascade of minor adjustments? The answer lies in the intellectual and moral sphere. Is economics capable of rethinking its core principles? What institutions, policies and rules are needed to make markets “well behaved”? Do we have the moral resources to challenge the dominance of money without reverting to the selfish nationalisms of the 1930s?

There’s no doubt that these are the right questions to be asking (David and I sketched out a first attempt to marshal some thoughts on this area in a paper we published just before the G20 summit in November). As Skidelsky notes, we could do worse than to aim for Keynes’s basic stance:

In terms of our pendulum analogy, he was someone who instinctively sought an equipoise: not in the timeless equilibrium of classical economics, but in a balance in political economy between freedom and control, national and international wellbeing, efficiency and morality. He was an Aristotelian, who believed that vices are virtues carried to excess. This is a good philosophy for today.

Poor old Karachi. Pakistan’s economy is yet again on the slide – with an IMF bailout threatening more hard times ahead (3 million job losses predicted). Mumbai’s attackers are said to have come from Pakistan’s business and media capital. And now… more riots. 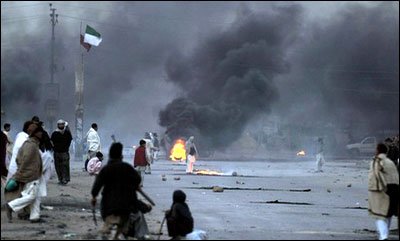 For the latest, follow #Karachi on Twitter, where the topic is trending heavily. Media reports are scanty – but four people are reported dead, many more injured… This is not likely to be associated to the Mumbai attacks (see background), but it sure won’t help!

Update – Grim, grim reports of much worse riots in Nigeria too…

Not a lot of comment needed on this one, really:

Never mind the bailout details – what were they eating?

Bloomberg has a major exclusive:

Nov. 25 (Bloomberg) — The deal to rescue the world’s best- known bank was pieced together by regulators over Domino’s pizza in near-empty offices one block from the White House …

In the middle of the meeting, Paulson called Bernanke, telling him that he and FDIC Chairman Sheila Bair, whose agency guarantees bank deposits and some debt, were still negotiating details, according to the person. Meanwhile, about 20 staffers were working at FDIC offices a block from the White House, subsisting on Domino’s pizza for dinner at around 8 p.m. and working on the deal until about 11:30 p.m., according to a person familiar with the matter.

Eh?  The biggest bank failure yet, and we’re focusing on the food they orderered?

But wait – isn’t this all slightly familiar?  Rewind back to the start of October, when UK officials were putting together the rescue package for Britain’s high street banks.  Here’s the Guardian at the time on the key points of the deal:

In the Treasury war room overlooking St James’s Park, central London, his chancellor, Alistair Darling, was thrashing out the details of the bail-out with ministers, lawyers and executives from the eight leading banks …

Anticipating the long and tense night ahead for him and his team, Darling had taken matters in hand at 8.30pm, personally ringing one of his favourite restaurants, Gandhi’s in Kennington, south London, to order £245 worth of rice, karahi lamb, tandoori chicken, vegetable curry and aloo gobi.

What is it with this obsession over what officials or liquidators were munching (and what time they placed the order) as they put together bailout packages late at night?  Well, Lucy Kellaway is on hand to explain:

Newspaper articles in these tumultuous, fatal, not-seen-since-the-Great-Depression times are so tightly packed with cliché it is hard to do anything other than join in.

To get the tone right, one needs to use clichés of four different sorts. First is the geological seam of seismic shifts, landscapes, earthquakes and meltdowns. Second is the newer, more vicious, medical imagery of injected, sharp, toxic, pumped, fatal and reeling. Third is the cliché of banal detail: what time it is, what people are eating, what their complexions look like (but only if pale) followed by another look at the clock. The only mundane cliché not to have been seen once in the last six weeks is “smoke-filled rooms” as that is now illegal. The fourth sort of cliché is to declare everything the worst since 1929 or the worst in living memory.

So there you are.  Sounds like an excellent excuse for a new version of Meeting Bingo…

From the department of big numbers…

$7.4 trillion… $7.4 TRILLLION – that’s what Bloomberg calculates the US government has now pledged to the bailout.