Does HIV cause AIDS? How much more evidence do you need?

It beggars belief that a decade after Thabo Mbeki and other AIDS denialists were completely discredited by a mountain of evidence (see a good summary here if you must), respectable media outlets still question whether the virus is caused by HIV. The latest in this shameful line is The Spectator, which at least has the (probably false) humility to ask whether it should be questioning the link (the answer is no, because it puts people’s lives at risk if they believe this garbage).

According to the Spectator, a Nobel Prize-winning scientist has said that you can shrug off HIV infections if you have a healthy immune system. This is the argument put forward by South Africa’s disgraced former health minister Manto Tshabalala-Msimang (who reckoned eating raw garlic would sort you out if you got infected). In all my time working in the HIV/AIDS field in Africa and the West (intermittent but over quite a long period), I’ve met one person who contracted HIV but didn’t end up needing antiretroviral drugs.  The Spectator would have it that this person (a scientist himself, as it happens) is one of multitudes.  Surprising, then, that he describes himself as a “human pincushion,” as so many researchers have tested him to find out what stops HIV turning into AIDS. If people like him were so numerous, you’d think the scientists wouldn’t have to subject him to painful jabs so often.

Last May I wrote about a World Bank scheme to pay Tanzanians to test negative for sexually transmitted infections (a proxy for HIV/AIDS), and about the positive effects on health of Mexico’s Oportunidades conditional cash transfer programme (South Africa’s pension scheme has also had beneficial health impacts, as have programmes to pay US drug users not to inject).

A new study by Rebecca Thornton lends further support to the idea that financial incentives should play a part in HIV prevention. In a randomised trial of over 2,000 Malawians, she gave some participants money in return for testing for HIV and finding out their results. Those receiving the cash were on average twice as likely to turn up to be tested as those left empty-handed. Even pretty small sums, amounting to a tenth of a day’s wage, had a significant effect on the likelihood of getting tested.

Unfortunately, Ms Thornton also found that being tested didn’t have much impact on sexual behaviour (though several other studies have found that knowing you’re HIV-positive makes you less likely to indulge in unsafe sex). Still, cash incentives could be used to persuade the reluctant to adopt other preventative measures, like male circumcision, condom use or, as the World Bank hopes, to find their own ways of staying negative. 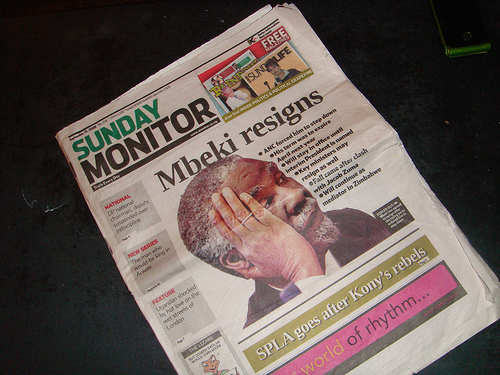 Manslaughter: The unlawful killing of a human being without malice aforethought (Oxford English Dictionary).

Some commentators think Thabo Mbeki’s decision not to provide antiretroviral drugs to South Africans suffering from AIDS (even while neighbouring Botswana and Namibia were using them to save thousands of lives) was genocidal. The policy, according to a new study by researchers at Harvard, caused over 365,000 premature deaths among adults and infants – about half the number who died in the Rwandan genocide, and many more than died in Bosnia.

Genocide is the “deliberate extermination of a national, racial, political or cultural group.” Mbeki’s stubbornness mostly killed black South Africans (a racial group), but proving he deliberately exterminated them would be tough. Proving mass manslaughter, on the other hand, should be a slam dunk.

The Treatment Action Campaign dropped a 2003 manslaughter case that charged the health minister Manto Tshabalala-Msimang with “unlawfully and negligently [causing] the deaths of men and women and children.” Despite the fresh evidence of the death toll caused by Mbeki and his henchwoman, however, the new spirit of co-operation between activists and the government means old wounds are unlikely to be reopened. I asked one of those activists what the families of those who died unnecessarily would think about letting Mbeki and his health minister off the hook: “Most of those relatives,” she replied, “don’t think someone else is responsible. Because of stigma and discrimination, they mostly blame the person who died.”