Why the way we vote matters for fighting poverty

2016 is a big year for voting.  The result of EU referendum sent shockwaves through the UK and around the world. The outcome of Colombia’s referendum vote surprised many and numerous national elections from the Philippines to Uganda have taken place. All eyes are now of course on the US as the election battle enters its final days.

The relationship between democracy and development has preoccupied experts and policy makers for decades. Most work focusses on the causal link between the two.  Is democracy a pre-requisite for development? Can you have development in an autocracy?  And what does democracy mean anyway?

There is universal agreement that free and fair elections are critical to a true democracy. However, much less attention has been paid to the way people vote and the impact on development outcomes.

This year, after a decade working on international development in the public and not for profit sectors, I spent some time working for a voting technology company. They provide everything from biometric technology to internet voting all around the world. Before I started I hadn’t thought a lot about the mechanics of how you actually vote and the impact it could have on development. But the more I got into my job the more I realised how intertwined they are. 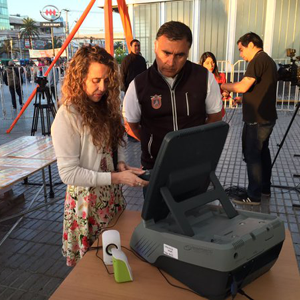 The benefits of electronic voting

The easier we make it for people to vote the more likely they are to do so. The more they trust the result the more likely they are to turn up to the ballot box. The faster the result is known the less instability there is likely to be. Technology can play a role in all of this.  From internet voting making it more convenient for people to vote at home or on their mobiles to biometric technology stamping out fraud at the ballot box, technology can boost  legitimacy of elections in many ways.

In its 2016 ‘Digital Dividends’ report, the World Bank noted that ‘digital technologies help enable the poor to vote by providing them with robust identification and by curtailing fraud and intimidation’. The report also suggests that digital technologies have made elections freer and fairer by improving voter registration and reducing errors. A fascinating study by Thomas Fujiwara of Princeton University found that in Brazil, the introduction of electronic voting made it easier for poorer people to vote, significantly increasing their participation. This led to the election of parties who increased spending on public health, a priority issue for those newly enfranchised voters, which in turn resulted in better infant health outcomes.

This month, a new publication authored by prominent election experts and which I helped to bring together– The Future of Elections offers further food for thought.  The contributors include Professor Jega, the acclaimed former head of Nigeria’s Electoral Commission, Dr Bam who ran South Africa’s Independent Electoral Commission (IEC) for 12 years from 1999 and Dr Quraishi, formerly India’s Chief Election Comissioner.

There are three key elements which jumped out at me:

Firstly, innovation is happening in the most unlikely places: countries leading the way in digital democracy are not those you might suspect. For example, the voting technology used in the USA, the home of Silicon Valley, is in urgent need of updating.  And, the fact that we continue to vote in the UK with a pen and paper and meagre identify checks is frankly absurd. In contrast, India first began using voting technology in the 1980s revolutionising the participation of illiterate voters at the ballot box. In 2015, Nigeria used biometric technology to significantly increase credibility in its elections and huge countries like Brazil and the Philippines have used electronic counting to deliver almost instantaneous results significantly reducing the incidence of electoral violence.

Secondly, we need more evidence: whilst the essays provide good qualitative evidence on the role of technology, there is still not enough thorough analysis- especially on the benefits it could bring for particular groups. For example, would technology encourage more women, who due to work/home obligations and safety concerns may be less likely to go to the polling booth, to vote? Another area which needs urgent attention, as a recent report from the Atlantic Council highlights, is whether technology lowers the cost of elections.  For many low-income countries this could mean significant savings and more to invest elsewhere.

Thirdly, trust in technology still needs improving: many people are still sceptical about the use of technology in elections, although the benefits are clear. A joined up effort from business, the international community and those governments who have seen at first hand the benefits it can bring could help change that.

The Sustainable Development Goals and Democracy

So how can the linkages between elections and development be strengthened? The Sustainable Development Goals say little on this- democracy is only once explicitly mentioned and elections not at all.  On the plus side the inclusion of Goal 16 –‘To promote just, peaceful and inclusive societies’ was in itself an important step forward but,as the Chief Executive of the Westminster Foundation for Democracy, has pointed out, one particular gap is ‘the failure to address the key instruments of representative democracy, namely parliaments or political parties’. Instead the targets are very broad talking about ensuring “responsive, inclusive, participatory and representative decision-making at all levels”.

The broad nature of the targets is  however an opportunity–to interrogate how exactly that representative decision-making can be delivered and then to take action.  Specific targets to bolster voter turnout could have a huge impact on democracy, development and citizen trust by holding governments to account for their efforts to encourage people to turn out to vote (not just those that it is most in their interests to convince). Technology is by no means a silver bullet but it could be a vital part of the solution.

Within development there has been a lot of focus technology, for example in healthcare, education or disaster relief. Elections are an area that could do with much greater attention. Technology offers a golden opportunity to increase the legitimacy of elections but it will take a concerted effort and focus to make sure it benefits people in some of the poorest countries of the world.