Guest post from Vic Langer, Campaigns Director at Save the Children UK, on a talk by Ruth Hunt, CEO of Stonewall, in the latest in Save the Children’s #changehistory series. You can listen to all the other talks in the series here. 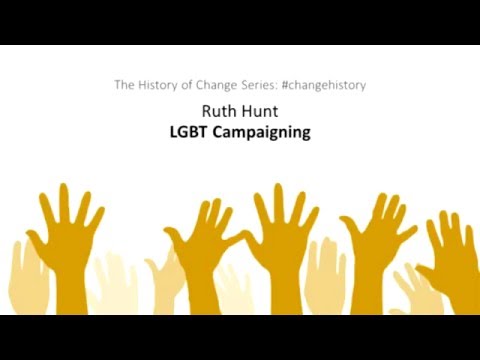 “It’s not about me, it’s about us”, this probably sounds like the sort of thing you imagine being uttered during relationship counselling; it is however the rallying cry to the UK LGBT community about what’s next in the journey toward LGBT equality issued by Stonewall CEO Ruth Hunt.
It’s always good to have the opportunity to reflect on lessons from campaigning history and our lunchtime talk from Ruth Hunt to mark LGBT History month was no different. Rattling off a few key moments from history to demonstrate the long held societal anxiety around male sexuality Ruth sketched out for us the conditions under which Stonewall came to be, and what it was for.

Established in 1989 against the hostile backdrop of Section 28, an offensive piece of legislation designed to prevent the so-called ‘promotion’ of homosexuality in schools, Ruth described Stonewall as an organisation focused on creating a pragmatic consensus in UK society. It was this consensus that saw the creation of “the good gay”, the presentable face of the gay male in the eyes of the mainstream. Quick to emphasise that for the large part this was a male movement, a white, elitist one at that, at one point she quips the lesbians were “off making the tea”.

So how did a these gay men achieve full legal equality in the UK? Through assimilation! These were clean cut, monogamous, home owning, employed men looking to get hitched, settle down and start a family. All they wanted was normalcy. The narrative was set; there was “nothing queer about being LGBT”.

I know from my own experiences of attempting to navigate the politics of the LGBT community that this approach isn’t without controversy. The impact on LGBT people of moving not against but into heteronormative discourse has been the subject of hours and hours of debate. Reflecting on whether assimilation was the right approach Ruth is clear – that’s something for history to decide.

A history that had her a few minutes earlier reeling off the wins secured over the last 20 years. Equal immigration rights, equal age of consent, the repeal of Section 28, civil partnerships, legislation to stop discrimination against LGBT people around goods and services, the list goes on. It’s an undeniable fact that through the assimilation approach full legal equality has been achieved, I guess the thing that history will decide is whether the cultural trade-offs were worth it? Did LGBT communities even want to assimilate?

One thing that is clear is that legal parity is a far cry from social acceptance, and so the struggle continues. Now Stonewall’s challenge is how to get their supporters to share their equality gains with others, hence Ruth’s mantra of “it’s not about me, it’s about us”. For her it’s time to diversify the public consensus from what it looks like to by gay, to what it looks like to by LGBT, to be black and lesbian, to be working class and trans.

Diversity was one of Ruth’s top tips for campaigners because different people resonate with different audiences and it’s her view that long term social change happens when you have consensus from the widest possible base.

A clear reminder to all of us campaigners and activists was the advice that no one cares as much as we do, we care more about the issues we campaign on than anyone else, and even then if we are honest there are moments in our day when it’s time for even us to switch off.

That brings us to clear communications – make the headline, keep your points crisp. Clear to highlight that this takes discipline she underlines that it’s our job to spell it out to our audiences in ways they both understand and have time for.

She’s also keen to emphasise that counterintuitive partnerships yield extraordinary results. Making the decision to work with Paddy Power was a risky endeavour for Stonewall, there were moments when they could have been just one tweet from catastrophe, but in the end the partnership was powerful because it reached a section of society that would have continued to be unreachable without such collaboration.

There are no apologies made by Ruth for Stonewall’s collaborative, mainstream, working with you – not against you approach. The organisation will never be on the outside shouting in, it lives firmly in the mainstream but that doesn’t mean a refusal to challenge the status quo. Ruth recognised throughout her talk that the future is about creating a wider movement for social equality, that there is much work to be done in society around race and gender. As she comes to a close she shares that she has to think a lot more about the decisions that she makes because she is a woman leading Stonewall – but sadly we were out of time so there is no getting further into that issue, which is a shame because I wanted to ask if the lesbians are still busy making the tea?

Understanding that the point is not winning the conflict but extending it has been an absolute game-changer for me. The analysis here is SO GOOD 👇🏽. @CCDHate and @Imi_Ahmed doing great work on this too. twitter.com/alexevansuk/st…