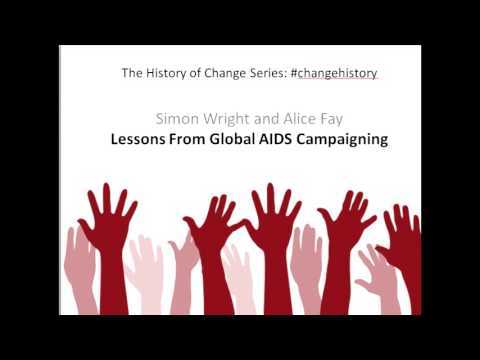 Guest post from Jack Wilson, campaigner at Save the Children, reflecting on a talk by Simon Wright, head of child survival policy, in the latest in Save the Children’s #changehistory series.  You can find out more about the series here and here.

We’re in 1980s Britain and what was initially termed Gay related immune deficiency is causing increasing alarm. As the first appellation suggests, fears over HIV and AIDS were strongly linked to homophobia. Indeed, with very little research being done into what was causing the spread of the disease, information was scarce, leading to a void which was readily exploited by other agendas. This discrimination expressed itself most controversially in people being sacked.

This set the scene for the first HIV/AIDS campaigning efforts. At first national, then global, campaigning for the response to HIV/AIDS has arguably been one of the most successful development movements in living memory. Below is a short summary of how the campaign developed over the past three decades.

At this time, no treatments for HIV were available. Thus the initial response very much focused on prevention through information dissemination via networks and community groups, with the emphasis on educating about the risks. These early efforts were often led by gay activists who felt a need to respond to what they felt was just the latest in a series of discriminatory attacks on their communities.

By 1986, the UK government was finally beginning to take notice. Norman Fowler, then Secretary of State for Health, initiated efforts to mainstream the issue of HIV/AIDS. The message was clear: HIV affects everyone, gay or straight, get tested. Because of certain prevailing attitudes, Fowler understood it was important to dissociate HIV from gay men. This more rights-based approach that took shape in the late 1980s was aimed squarely at reducing harm.

Despite this obvious progress compared to the beginning of the decade, the mainstreaming of the issue into broader society would prove to be a double-edged sword. The message that HIV affects everyone had gotten out so well to the rest of society that efforts to directly target gay men, still by that stage the most affected, were dropped. From this time onwards, campaigning efforts became increasingly led by those living with HIV. Activists in the US in particular became renowned for their confrontational tactics at getting the issue of treatment access on the political agenda.

The events in the 1980s and 1990s set the scene for what was to come next – the shift to a global campaign led by both international governments and NGOs. The perception that HIV/AIDS was now centrally a development issue was born out of the staggering data showing that in some countries 20%-25% of the entire adult population had HIV. Suddenly fears that the economically active sections of these societies could be wiped out forced the issue onto the international political agenda.

In 1996, UNAIDS was formed, recognising that HIV/AIDS needed a much more coordinated global response. In 2000, the UN Security Council held a meeting on HIV/AIDS, the first time it had discussed a non-conflict related issue. By 2003, the G7 had agreed to finance the Global Fund targeted at HIV/AIDS, TB and Malaria, while at the WHO Jim Kim was leading efforts to scale up treatments of the disease in poorer countries, along with prevention and care programmes.

By this stage over 40 million people worldwide were carrying HIV.

With governments now taking notice, efforts in some countries switched to the companies refusing to lower the prices of anti-viral drugs. Most infamously, campaigners in South Africa successfully forced a number of pharmaceutical companies to drop a court case that aimed to prevent the government from licensing and importing cheaper generic HIV drugs.

The court case was a highly symbolic win for HIV activists and the campaign resonated around the world. AIDS was now a social justice issue. The wider reputational damage to the big pharma companies was substantial, the ripple effects of which are still being felt to this day. Ultimately, the Treatment Action Campaign in South Africa proved immensely successful in bringing down the prices of anti-retrovirals. Much like their radical predecessors in the 1980s, South Africa was another example of the power of campaigns who found their energy from those personally affected by HIV.

The UK steps up

HIV campaigning had now come a long way. There was increasing optimism that the international community was getting its act together. Inspired by these campaigns, NGOs in the UK decided this could be a moment to push the UK government to focus on HIV treatment.

Cue the Stop AIDS Campaign and Make Poverty History. There are lessons on those at an earlier #changehistory talk here. Efforts led by ActionAid resulted in hundreds of thousands of signatures being collected on the issue of HIV treatment that were sent directly to No 10. This then gave the mandate for the UK government to push action on HIV/AIDS treatment for all as an outcome at that year’s G8.

From the early day educational campaigns up to the UK government’s  push in 2005, the main lesson I draw is that each step would not have been achieved without the one that came before it. For Simon Wright there are three main lessons learnt: