Right in front of us, the chair of the Paris climate talks burst into tears. 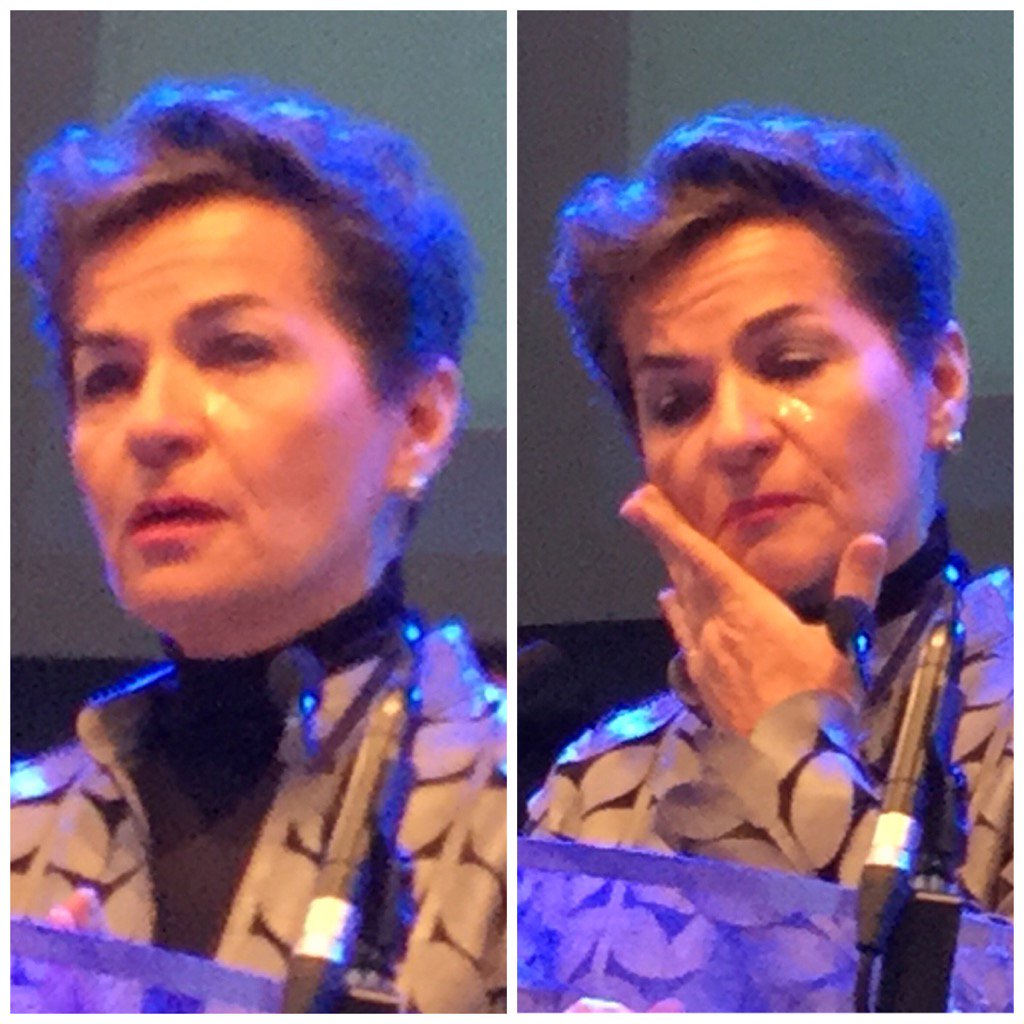 Her tears were the most appropriate summary of the summary of the draft deal. The emissions levels pledged, which would have needed to amount to no more than a 1.5 degree rise to keep the world safe, or a 2 degree rise to keep the promises made, add up instead to a 3 degree rise. That means millions of people pushed back over the paltry poverty line, on purpose. The finance pledged for adaption is only a fraction of what official estimates calculate is needed, while there is no mechanism to pay for the loss and damage already caused; worse, much of the finance is double counting or will be taken away from, rather than be additional to, development aid, and much of it is in loans, so that the victims are lent money with interest to bandage the wounds inflicted by the lender. It is the most brutal inequality. What else to do but weep?

But despite this, campaigners in Paris are upbeat. I caught up with Yeb Sano, the former Philippines climate negotiator whose tears at an earlier failed climate meeting became a viral video which moved millions of people around the world. Now an activist, he’d just walked for sixty days from Rome to Paris as part of a People’s Pilgrimage. 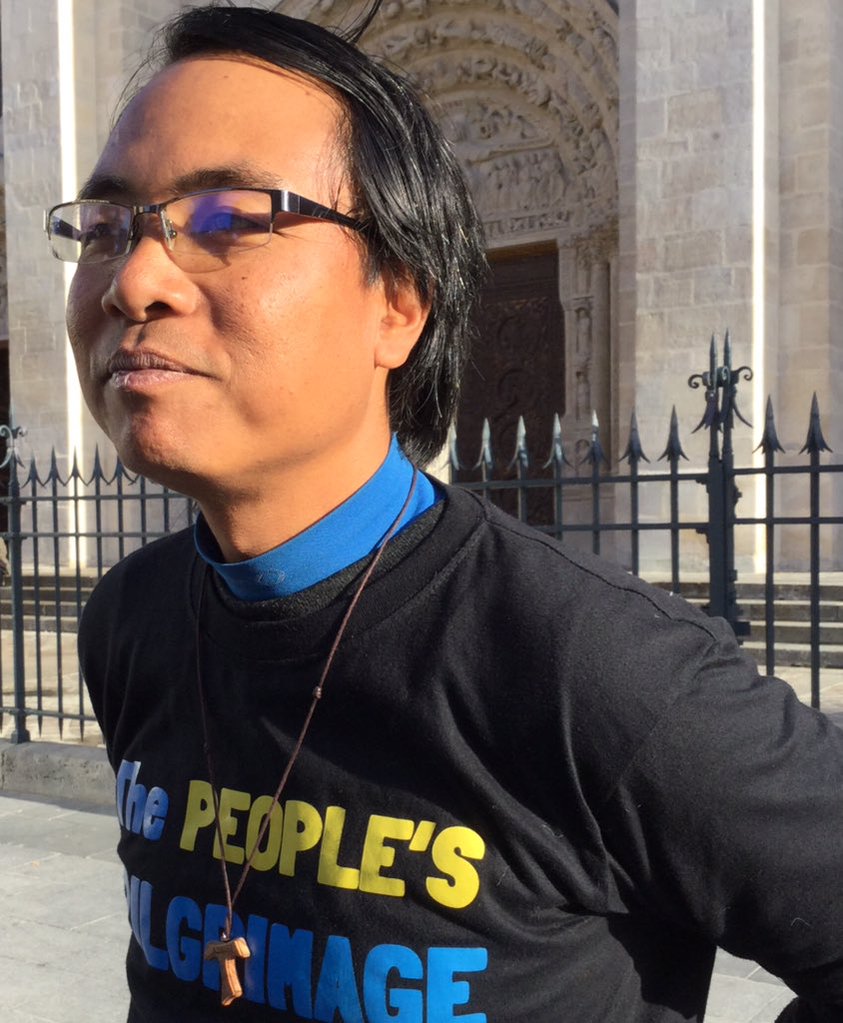 “You don’t look tired,” I remarked. “Humans were built to walk,” he replied. “Are you optimistic about the Paris talks?” I asked. “No.” “How come you look happier than I’ve ever seen you?” “The movement is building.”

I passed the Bataclan where destructive nihilism felled young people singing and dancing, and stopped to pay my respects. 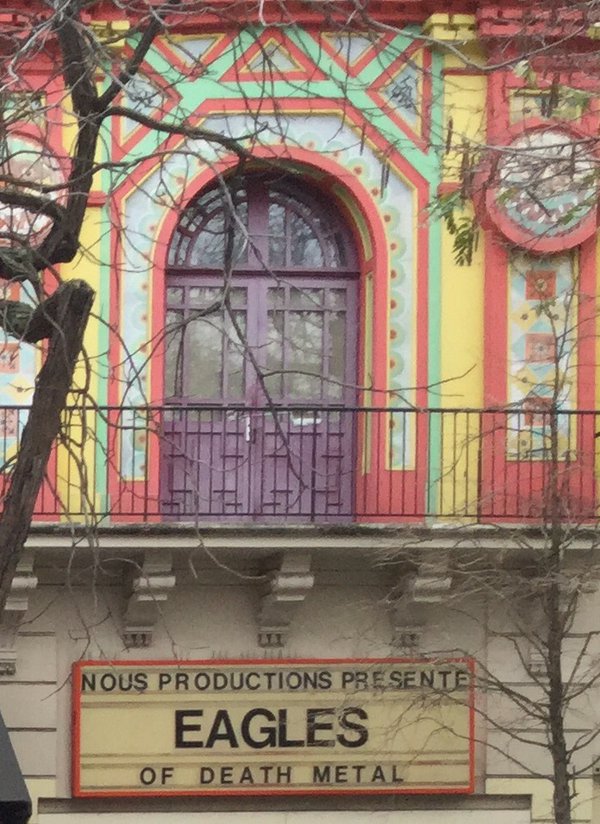 The listing at the Bataclan remains as it was that night. A beautiful tribute, a quiet defiance. The music goes on. And we counter the nihilism of that night with an insistence on the common good, and in marching for a world where all are precious. How right it is that people should gather in Paris for climate justice, just as we did in Tunis for social justice.

What is happening is bigger than the text. Details are still be finalised in the Paris text, and important fights are being fought in the negotiating hall, but whatever is agreed it is clear that it will not be enough. It’s clear too that it’s not even a small step in the right direction – some of the trajectory is in the wrong direction. The discussion is about action after 2020, so the powerful have given themselves a five year climate action holiday; the progressive framework of the UNFCCC is being undone; rich countries have got the NGO observers banned from being inside the negotiations to witness what is happening; and a strategy of divide and rule is being used by the West to pit Asia against Africa, and separate the so-called middle income countries (home to most of the world’s poor) from the rest of the developing world, so that failure can be blamed on the Indians or Chinese whose per capita emissions remain well below those of the West. Some activists and even governments are so frustrated with the text that they are already starting to say that no deal would be better than a bad deal. None of those who think a deal still worth making argue that it would be a cause for celebration.

But something else is happening. The power of the people is starting to gather. Unprecedented numbers of people have taken peacefully and powerfully to the streets, including in Paris.

Faith communities have come together as one to call for climate justice. They shared a petition of 1,780,528 people, each name carefully recorded – but most importantly, done together.

The people most affected by climate change are organising, speaking out, and being heard. 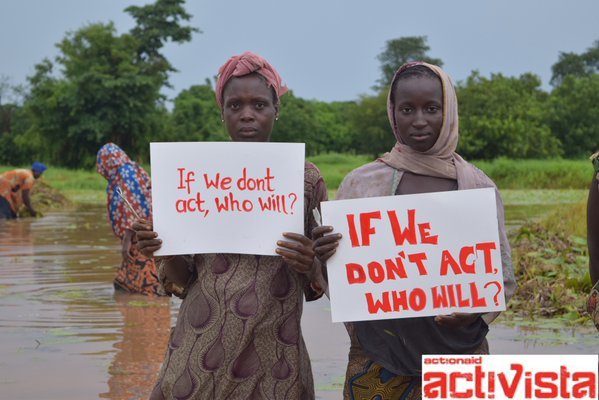 And groups are coming together across the old dividing lines. Friends of the Earth chair Jagoda Munic put it perfectly: “our work is to increase the power of communities and to decrease the power of big corporations; we cannot bring the changes, on the scale we seek, on our own.” The movement to fight inequality is getting stronger, uniting NGOs and trade unions, development and environment, secular and faith, campaigners from the North joining with the social movements from the South.

None of this is in time for this climate meeting. The official process has been overrun by greenwash and smothered by corporate lobbying. A poster to greet those arriving in Paris describes 50 ideas to tackle climate change. Sponsored by Total. None of them is about restraining Total. Contrasting the rhetoric of world leaders with the power politics of the talks, a colleague tweeted, “Koch brothers raising ugly hydra heads at COP21. In latest text US doing opposite of Obama’s pretty speech on Monday.”

I felt the contradictory emotions of short term pessimism and longer term optimism when I spent the day with young activists from Gambia, Senegal, Nigeria, Zimbabwe and Brazil. None of them were what might once have been called “climate activists” – all of them were activists who saw how connected climate was to their wider struggles for social justice. 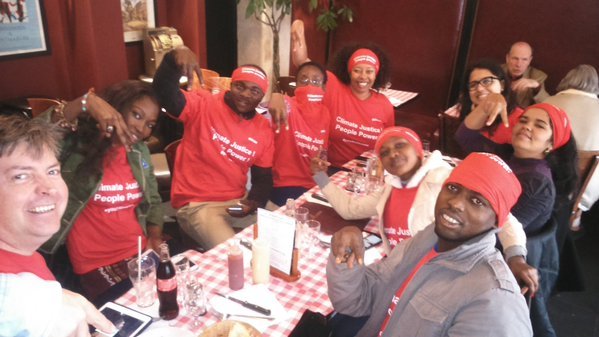 Saiba, from Gambia, shared how he had only managed to get through school through the kindness of neighbours and friends who had paid the fees, and how this led him to be campaigner against inequality. He talked about his families’ farm, and how the rice fields were now wrecked by flooding and he didn’t know what they would do if there was no harvest. Rafaela from Brazil talked about how she had managed to break free from a father so violent he had tried to kill her, and how she and her mother now made their living, and secured their dignity and independence, by cultivating a small farm. She shared how that land had always been dry, but was now becoming so dry that farms were becoming unfarmable and diseases like typhoid were spreading. Social injustice had pushed them to the edge and climate injustice was pushing them over it. Rafaela was appalled at the selfishness and greed she sensed in Europe: “I come from a place where if you have no food we will feed you, if you have no shirt to wear we will take off ours and give it to you. People here have everything. I don’t understand why they find it so hard to share.” But others in the group were more hopeful. That morning we had formed a human chain with thousands of others across Paris. It gave them hope that change was possible. “When I go back to Senegal,” said Ngom, “I will tell them about all the French people who joined hands with us, so far that you could not see either end. I will tell people that there are many many people in Europe who are on our side.” They asked me what I thought would happen: “I think that you will win,” I told them. “But I don’t think it will be today.”

What will that victory look like? It will be when the powerful are forced to compromise with the people, when fossil fuels are fossilised, resources more evenly shared and the climate crisis halted. I believe it will come. And we will celebrate, rightly. But then we will look back and we will see all those who did not get there with us. We will see whole islands disappeared, whole cultures lost, millions of lives cut short, millions forced to live away from the place they call home. We will remember them. And like the chair of the climate talks, we will burst into tears.

What do we want? Climate Justice! pic.twitter.com/YtmWFEpuz3