The struggle over inequality: What to expect as world leaders meet in New York this week

Also here are the NGOs asking world leaders awkward questions like “How will you pay for your promises? Have you thought about tackling tax dodging?” and “But you know that to tackle poverty you’re going to have to reduce inequality, right?” Stuff like that. (Memo to governments annoyed with such impertinence: the NG stands for Non-Government, that’s our role.)

But the really big draw this year is the PopeStar, the PopeIdol, the RockandRoll: Francis. He’s got the smallest country but the biggest fan club. Other world leaders wonder why everyone keeps cheering the kind old man who keeps saying that the rich and powerful have a duty to share what they have, that governments have a responsibility to make their countries and the world more equal, and that every person deserves a decent job with a living wage and the right to join a union. Those other leaders can’t see what it might be that makes such a leader so popular, and they guess it must be the hat. 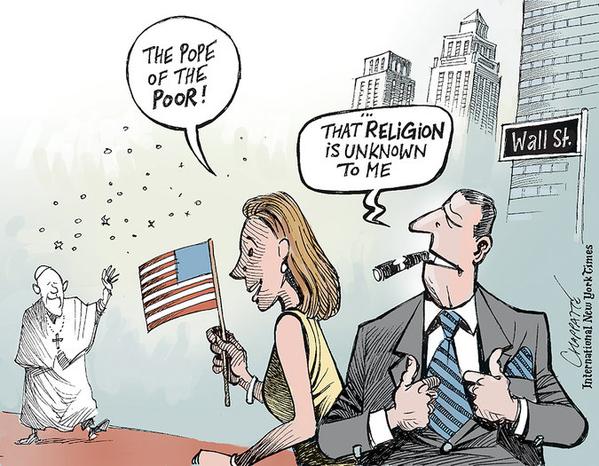 Meetings like the UN General Assembly are partly an excuse for a schmoozfest, and partly a chance for pomp, and partly a place for fixing immediate crises.

But they are also an occasion where global norms are shaped – not just by the text that is signed but also by the debates that are held. And the big debate, the big clash, is about the importance of inequality. For several decades now most leaders have pursued policies that have increased inequality, and claimed that a rising tide will lift all boats. The consequence of that has been an increase in the number of superyachts from 6000 to 9000, and a divided unstable world that cannot meet the pledge to end poverty unless it changes course. 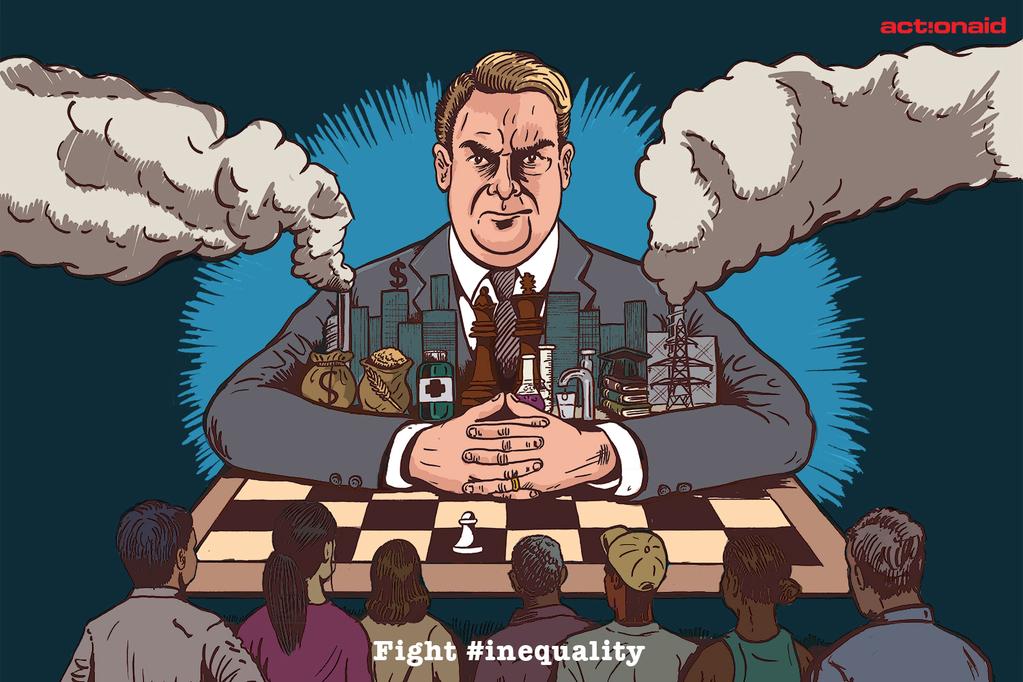 That in Africa the 10 richest families have the same wealth as the poorest half of that continent (calculations by the World Bank) is a one more illustration of today’s brutal inequality. So too is that, across countries, the number of people in guard labour can be predicted by how unequal a country is. And that even the IMF says inequality is slowing down growth. And that even top business chiefs are warning that inequality has gotten out of control for a functioning market. But still most world leaders either deny that there is an inequality crisis or continue to pursue policies that make inequality worse. 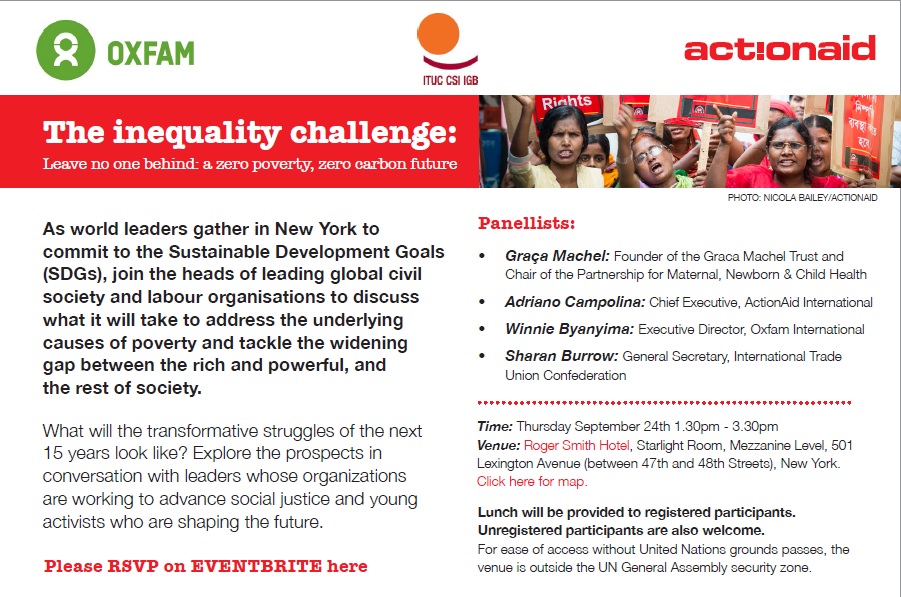 That’s why a growing movement across civil society is coming together to challenge inequality. This week Graca Machel will join International Trade Union Confederation General Secretary Sharan Burrow, NGO chief executives and grassroots activists, to highlight how inequality is holding the world back and how to build pressure from below to force world leaders to tackle it. Link here if you’d like to come along. NGOs will also be holding rallies and stunts to push the issue of inequality onto the leaders’ agenda – challenging governments in the hallways and in the streets. This is what Anti-Apartheid leader Jay Naidoo calls the struggle against “Apartheid 2.0” – the widening chasm between a powerful few and the rest. And that’s why he’s here alongside us in New York.

We already know exactly what the new SDGs will say. Every dot and comma has been pre-agreed. The only thing we don’t yet know is whether this time leaders will keep their promises. What will determine the answer to that is whether they get serious about tackling inequality. And what will determine that is whether the rest of us make them do so. Increasingly, people are fighting back. They are saying they can’t win when the game is rigged, and asking what would the world look like if the rules were fair.