Now here’s an interesting graph, courtesy of the World Bank’s resident inequality guru, Branko Milanovic. It shows change in real incomes over the period of 1988 to 2008 at different percentiles of global income distribution (in 2005 dollars, adjusted for PPP). 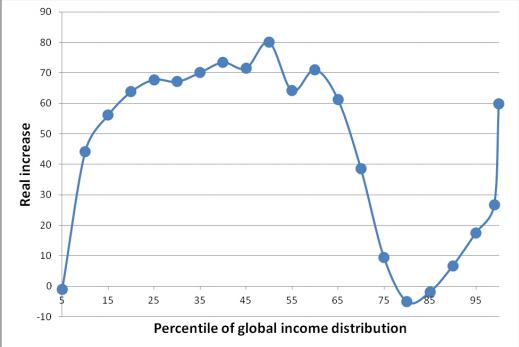 Over at the right hand side, what you see is the mega-rich doing very well indeed: the real incomes of the top 1% went up by 60% over this period. (That’s about 60 million people, by the way – including the richest 12% of Americans, the richest 3% of Brits, Japanese, Germans, and French, and the richest 1% of Brazilians, Russians, and South Africans.)

But they’re not the biggest winners, as it turns out. To find them, look at that massive peak in the centre of the x axis, between the 50th and 60th percentile of global income. There you’ll find 200 million Chinese, 90 million Indians, and 30 million each from Indonesia, Brazil and Egypt. These are the people who’ve seen the fastest rise in incomes: an 80% real terms increase over 20 years at the median.

Over at the left hand side, you find the world’s poor. They’ve also done pretty well, for the most part, with real incomes rising between 40% and 70%. This is ground zero for the decline in the number of people living in extreme poverty in recent times (from 44% to 23% of the world’s population over these two decades). There’s an exception, though: the really poor people who are on the far left hand side, whose real incomes have remained stagnant. Want to ‘get to zero’ on poverty as part of the post-2015 agenda? These are the people you’re focusing on.

And that huge dip between the 75th and 85th percentiles? Why, that’s the squeezed middle in developed countries, plus a lot more people in Latin America and former Communist countries – watching their incomes stagnate while those just to the right of them hoover up globalisation’s winnings.