Quote of the week: “While I’m not comparing the Rebel Alliance to Al Qaeda or the Galactic Empire to the United States…” 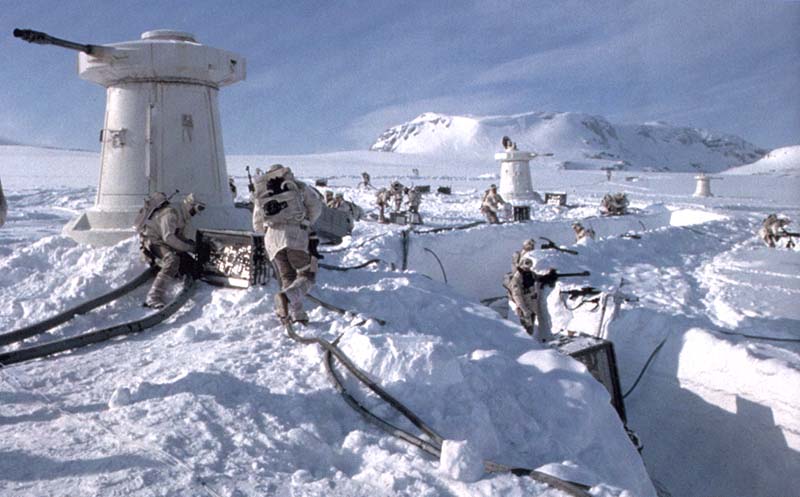 Finding myself watching Empire Strikes Back last night, I found myself reflecting once again on the general crappiness of the rebels’ defenses – for instance, the gun that looks like a radar dish and appears to fail to inflict any damage on anything whatsoever during the battle.

So it’s especially pleasing that Wired’s national security correspondent Spencer Ackerman has decided to employ his knowledge of counter-insurgency doctrine to a setting out a detailed tactical analysis of the Battle of Hoth. Sample:

From a military perspective, Hoth should have been a total debacle for the Rebel Alliance. Overconfident that they can evade Imperial surveillance, they hole up on unforgiving frigid terrain at the far end of the cosmos. Huddled into the lone Echo Base are all their major players: politically crucial Princess Leia; ace pilot Han Solo; and their game-changer, Luke Skywalker, who isn’t even a Jedi yet.

The defenses the Alliance constructed on Hoth could not be more favorable to Vader if the villain constructed them himself. The single Rebel base (!) is defended by a few artillery pieces on its north slope, protecting its main power generator. An ion cannon is its main anti-aircraft/spacecraft defense. Its outermost perimeter defense is an energy shield that can deflect Imperial laser bombardment. But the shield has two huge flaws: It can’t stop an Imperial landing force from entering the atmosphere, and it can only open in a discrete place for a limited time so the Rebels’ Ion Cannon can protect an evacuation. In essence, the Rebels built a shield that can’t keep an invader out and complicates their own escape.

Later comes this gem, which will doubtless have caught a few of his readers by surprise:

Nor does [the Imperial] “blockade” trap Luke, who flies to Dagobah without a single Imperial ship harassing him. That’s the worst possible news for the Empire: Luke is about to rekindle the Jedi order that poses the biggest danger to the preservation of everything Vader and Emperor Palpatine have built. While I’m not comparing the Rebel Alliance to al-Qaida or the Galactic Empire to the United States, in strategic terms, this is like Osama bin Laden’s escape from the December 2001 battle at Tora Bora, Afghanistan — a disaster masquerading as a tactical success.