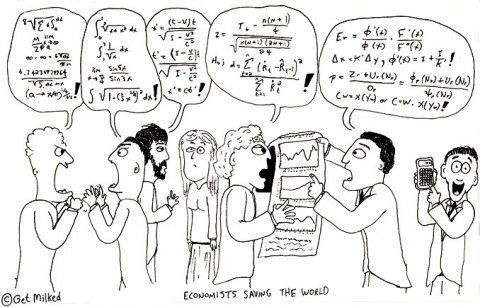 Economists dominate the development field, but politics is more important to promoting it. This contradiction explains why the policies often recommended by international institutions (such as the World Bank) do not sufficiently take into account the local political, social, and institutional context.

The problem is echoed in other fields, with some blaming the inability of economists to understand institutions and politics as a contributing factor to the 2008 financial crisis.

Economists were not always this ignorant. Thinkers such as Adam Smith and David Ricardo—known today as founders of the profession—considered themselves “political economists;” they never used the term “economics” by itself. The term didn’t stand by itself until the late 19th century when it was separated into a stand-alone discipline.

This separation has been exacerbated by the mathematization of the field in recent years: the more econometrics forms the centerpiece of Ph.D. programs, and economists need to publish articles based on econometric studies to get ahead, the more the field depends on a numerical understanding of events. But, many of the most important issues that affect how policies play out are not translatable into numbers. The hyper-quantification of economics has encouraged a belief—never held by men like Smith—that politics (and institutions) do not matter. It has led to answers to important questions that work perfectly well in some office in Washington or Chicago, but that do not play out well in Lagos, Karachi, and Kinshasa.

As former World Bank President Robert Zoellick, who is not an economist, said in 2011,

Too often research economists seem not to start with the key knowledge gaps facing development practitioners, but rather search for questions they can answer with the industry’s currently favorite tools. . . . We need to know what works: we need a research agenda that focuses on results.

He has also expressed frustration that economists have not figured out the most important issues related to development, including what makes countries grow rapidly over a long period of time.

Although there have been attempts to put politics back in its proper place in recent years, the effort is hindered by the dominant role of economists in the development field (and has mostly failed). Whereas “development economists” have a leading role both in academia and in international organizations, there are no “development political scientists” because the profession does not exist. Many of the few people who work on the politics of development are trained as sociologists, anthropologists, or regional specialists, or learned firsthand on the ground how development works. Others are political scientists who have chosen development as their area of focus. They see development for what it is, not as how it has been explained in a classroom or in some theoretical application.

But such people remain a very small minority in the overall development field—and nothing happening now suggests that this will change in the future.

There is only one way to change this dynamic: create a separate profession that has equal stature to development economists but that focuses on political development and the politics of development. This new profession would have its own academic departments, own journals (some already cover aspects of the field), and own theories on development. It would encompass people like Douglass North, Francis Fukuyama, Barry Weingast, and the late Samuel Huntington in academia, and David Booth, Mick Moore, and Sue Unsworth in the policy community. And it would offer a counter argument for how states evolve to the current widely-accepted model that equates democracy promotion with political development and underweights the role of politics in policy formulation and implementation.

A leading university and development think tank should take the lead and create this new profession. As a start, they should launch a new academic program that trains development political scientists. Combining knowledge from the fields of history, political economy, economics, sociology, and anthropology, this new field would produce experts that can play a role equal in prominence to development economists in interpreting and recommending policy for developing countries. They should work with leading experts who do related work (such as the New Institutionalists) to build up the field.

The greater the stature of the field, the more that specialists in it are recognized, and the larger and more comprehensive the output they produce, the more likely that developing country governments and development agencies will place deserving emphasis on politics.