The most heavily aided place in the world

Ever wondered where gets most Official Development Assistance per capita in the world? Have a guess. Somewhere in sub-Saharan Africa? Nope. The Occupied Palestinian Territories? Uh-uh. Somewhere that’s recently had a huge humanitarian disaster? You’re still way off. 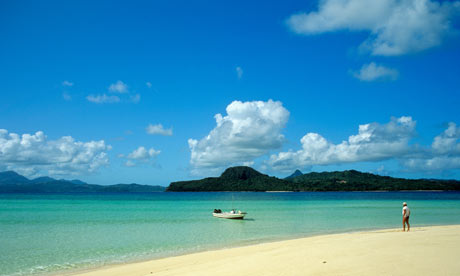 In fact, it’s the place in the photo above – that’s the French dependency of Mayotte, in case you’re wondering, which in 2009 received the princely sum of US $2,751 per person in ODA.

Now, you’re probably assuming that this is just some strange anomaly to do with France’s generosity towards her overseas colonies. But in fact, numbers 2, 3, 4 and 5 in the top five most heavily aided places on the planet are also small island states – and by no means are they all French possessions. Tuvalu gets $1,785 per capita; Palau, $1,737; the Marshall Islands, $1,101; and the Federated States of Micronesia, $1,093.

In fact, no-one else managed to get over the $1,000 per capita mark in 2009. The next nearest was the West Bank and Gaza, at $748 a head. If you’re wondering when an African country that’s not a small island state gets a look in, then you’re looking at Djibouti – all the way down at $186 a head.

Oh, and newsflash – none of the above are low income countries. In fact, you have to get to number 24 on the list of countries that get most ODA per capita – that’s Afghanistan – before you find a low income country. But who ever said life was rational?

(PS – if you’re interested in the general insanity of global aid allocations, check out this recent paper from Jonathan Glennie and Annalisa Prizzon at ODI for a more thorough analysis than the one above. Me, I’m off in search of some consultancy work in the south Pacific. They can afford it.)