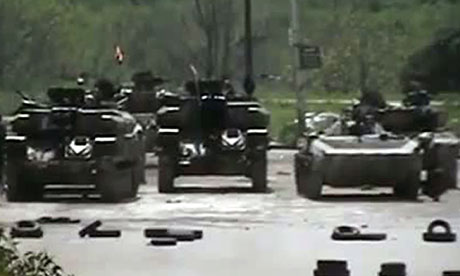 Last Friday, my attention was caught by the title of a piece on the Mideastwire blog:

Mideastwire’s editor Nicholas Noe took issue with this paragraph from something I wrote for Foreign Policy at the end of March (and also blogged about on GD):

Conflict resolution experts argue that combatants negotiate seriously when facing a “mutually hurting stalemate”: a situation in which both sides grasp that victory is unachievable. In February, it seemed possible that Syria was headed for just such a stalemate, with anti-government forces holding significant urban areas and the army losing confidence. If this situation had continued, Annan’s basic concept — a U.N.-supervised cessation of hostilities to create space for political dialogue — could have been workable.

Here is Mr Noe’s critique of what I had to say:

This is the old, one dimensional way to view attempts at conflict mitigation. But one critical side it misses is the effect of outside, preponderant powers and how this part of the equation can radically alter the playing field. For example, in Syria, the conflict is NOT between syria and an opposition – it is FAR beyond that. As such, the conditions of negotiation and conflict are radically different AND, because Syria is actually a fairly weak actor vis a vis its opponents, the opportunities can and should be far more open for its opponents to offer, perhaps, POSITIVE INCENTIVES which can 1) help fracture the regime if reasonable offers are rejected or 2) ease the regime actor into the guts of an international process that steadily drains the regimes ability and desire to exercise violence and project instability… either way flexibility is the possibility which must be seen and emphasized for the vastly preponderant actors!

Gowan’s standard, simplistic view does not allow for this aspect of dynamism which is critical in the current situation – reducing matters to “when both sides grasp that victory is unachievable”… But Mr, Gowan – what about when the weak regime actor sees benefits as well to mitigating conflict and moving into an internationalized process?

I felt a little put out, as what I said was taken out of context here.  You might assume that I was opposed to the Annan plan: but the FP piece was a qualified endorsement of the plan.  I concluded that “Annan is not a miracle-worker, but he is a professional: he should be given the chance grind out a peace deal.”   However, the last 2-3 days have brought a lot of evidence that the Syrian regime also has an “old, one dimensional way” of looking at conflict.  Rather than entering into an internationalized peace process (perhaps out of fear of losing leverage), Syria has (i) ratcheted up the violence and (ii) effectively called on the Syrian opposition to admit defeat; and (iii) ignored intensified international condemnation of its behavior.

I can only read this series of events as follows: Assad grasps that if he can crush the opposition, he can either avoid political talks altogether or (more likely) sit down to talk with some set of cowed and broken foes from a position of strength.  In such circumstances, the fact that Assad is potentially vulnerable to pressure from outside powers may not matter.  After a convincing military victory, he could offer some vague package of insubstantial reforms and (as I argued in FP) find a few opposition leaders who would be prepared to go along with him out of desperation or opportunism.

This is clearly a scenario that many in the Syrian opposition fear, and why leading rebels have refused to accept his terms.  Assad’s militant opponents may be in bad shape, but they would rather hang on for increased military supplies from their Arab backers than put faith in flexibility and concessions in talks with Assad.

So I’m afraid that my pessimistic analysis looks more convincing now than it did last week.  Events may change again: Russia may yet finally get its act in gear and force Assad to back down and talk.  In that case, Mr Noe’s optimism may be justified.  A chastened Assad, fearing that Moscow could desert him, might start to behave very differently.  My initial support for the Annan plan was based on the assumptions that (i) Assad’s military push would lose steam and (ii) Russia would make a successful effort to call him to order.  As of now, the military situation is awful and Russia has either failed to apply sufficient pressure or (as the Washington Post quotes me today) Assad holds Moscow in contempt.  Simplistic, perhaps, but that’s the brutal reality.