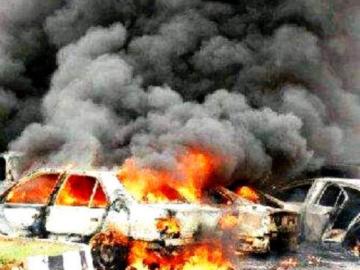 Although it is extremely hard to predict the actions of a terrorist group such as Boko Haram, Lagos, Nigeria’s commercial capital, may be a looming target.

The organization’s capacity and ambition have grown swiftly, probably due to assistance from extremist groups in the Maghreb, Somalia, or farther afield.

And, as I wrote in December,

The country’s weak institutions make it ill-prepared to deal with threats like this. It is unlikely to have the capacity to meet the challenge. Expect more attacks in the coming months.

According to Human Rights Watch, Boko Haram has killed 935 people since 2009 in 164 attacks, including more than 250 in the first weeks of this year. It has bombed churches, police stations, military facilities, banks, and beer parlors. It attacked the United Nations headquarters in Abuja in August.

Last Friday’s devastating attack on Kano, Nigeria’s second largest city, went well beyond what any analyst predicted it was capable of. The Financial Times reported:

Eyewitnesses said hundreds of Boko Haram operatives were involved in the raids on eight police, intelligence and government targets that lasted several hours.

The police discovered 10 car bombs and hundreds of other unexploded devices on Monday in Kano.

The group, loosely modeled on the Taliban, seems intent on provoking greater religious conflict in a deeply divided country. Its members even talk of overthrowing the state. As Shehu Sani, a civil society activist, said,

They will attack again. It’s now a war that’s going on.

President Goodluck Jonathan has called Boko Haram the greatest threat to Nigeria since the Biafra War in the late 1960s.

The group is benefitting at least indirectly from a deep sense of frustration among Muslims in the north at southern (Christian) domination of the central government at a time when it was assumed it was their turn to rule. The inability of the state to promote development in any form compounds the alienation.

Venturing deep into the south—as an attack on Lagos would require—may be difficult to accomplish. All the attacks so far have come in the north or middle of the country, places either predominantly or partially Muslim. But as the Kano attack indicates, the group has reached a new level of sophistication, which could allow it to go where it could not previously.

Lagos offers more Western targets and important government institutions than anyplace else. Attacking the former capital city would help Boko Haram demonstrate that it can strike anywhere it wants and that the southern led administration cannot govern the country, important goals for the group.

The stability of Nigeria matters. The country is the dominant power in West Africa. It is on track to become one of the world’s five most populated countries by 2050. It exports more than 2 million barrels of oil a day, and has vast gas reserves. It is an increasingly important emerging market, receiving an estimated $6.5 billion in foreign direct investment last year. It is expected to soon overtake South Africa to become the continent’s largest economy.

Reversing this ominous trend line will not be easy. It requires a mixture of political, developmental, and security measures, all executed effectively.

But this is probably well beyond the capacity of a government well known for its dysfunction. Right now, the Jonathan administration seems overwhelmed and unsure how to respond. The intelligence agencies and police have shown little indication that they are ready to protect the country. A number of captured suspects, including the one accused of orchestrating the Christmas Day bombing, have even escaped custody.

As John Campbell of the Council on Foreign Relations explains:

If the Jonathan government persists in dealing with Boko Haram as a security issue without acknowledging and addressing the political dimension to the insurrection, it is likely that the conflict will intensify. The impotence of the police, military and security services so far indicates that the Abuja government does not have the ability or resources to destroy Boko Haram. . . .

Money will not solve the Boko Haram problem, and a political settlement would require a restructuring of Nigerian politics that would be difficult for any presidential administration to achieve.

As an ex-resident of Lagos who cares for the future of the country I hope my analysis is wrong.