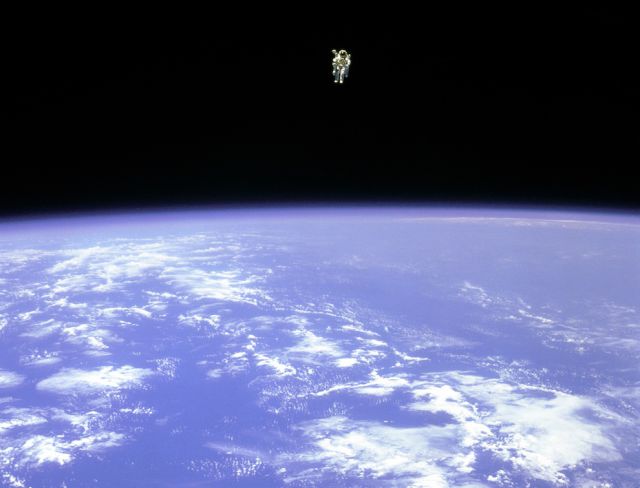 “As the Declaration of Independence laid the groundwork for the [US] Constitution, so the commission’s report lays the foundation for the constitution of a space-based civilisation.”

“The commission believes it is reasonable to expect to have a human outpost on the moon in 2005 and an outpost on Mars in 2015. To fund the program, the commission suggests establishing the space budget at a constant percentage of GDP.”

The conclusion of a Star Trek fans’ convention? Nope: this is 25 years ago, and the commission in question is the US National Commission on Space, launched by the House of Representatives, and with a membership appointed by the President – including a former head of NASA, legendary test pilot Chuck Yeager (immortalised in Tom Wolfe’s book and film The Right Stuff), and Neil Armstrong. The quotes are from a rather wonderful book published shortly after its report came out, entitled The Overview Effect, which was written by Frank White – a senior associate at Princeton University’s Space Studies Institute, who was heavily involved in the commission’s work.

It’s kind of striking how much more introspective our public discourse has become over the intervening quarter-century. You just couldn’t write stuff like that today and expect to be taken seriously. Now, the shuttle program has been killed off; manned space missions haven’t been outside Earth orbit since the 1970s; and I’d probably be rash to predict that Mars will be settled within my lifetime.

All of which is kind of a shame. For as White chronicles in his book, the real point about space exploration is less the technological wizardry involved than how it changes our perspective and sense of identity. That’s especially true of the astronauts themselves – here for instance is Russell Schweickart, who flew on Apollo 9:

“You identify with Houston and then you identify with Los Angeles and Phoenix and New Orleans. And the next thing you recognize in yourself is that you’re identifying with North Africa – you look forward to that, you anticipate it, and there it is.

“And that whole process of what it is you identify with begins to shift. When you go around the Earth in an hour and a half, you begin to recognize that your identity is with that whole thing. That makes a change. You look down there and you can’t imagine how many borders and boundaries you cross, again and again and again, and you don’t even see them. There you are – hundreds of people in the Mideast killing each other over some imaginary line that you’re not even aware of and that you can’t see.

“From where you see it, the thing is a whole, and it’s so beautiful. You wish you could take one in each hand, one from each side of the various conflicts, and say, ‘Look. Look at it from this perspective. Look at that. What’s important?”

But it’s also true of the rest of us. After all, the images of Earth from space that came back from the Apollo missions probably did more to shape modern attitudes to the environment than any other factor since the second world war. And at a point when we’re failing to get to grips with so many global risks – above all climate change – anything that makes us think of ourselves in more planetary terms is undeniably a Good Thing. Maybe it’s time to get excited about the Final Frontier again.

Me, I favour holding multilateral summits in space. That would really change the G Zero dynamic we’ve seen so much of lately…