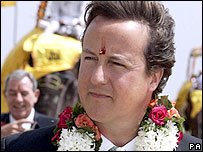 The UK parliament’s development committee begins its inquiry into UK aid to India next week with a question mark over the future of UK aid to a country where there are 450 million poor people – a third of the world’s poor -living below US$1.25/day. In fact, 8 Indian states alone have more poor people than the 26 poorest African countries combined.

This is emotional territory – on both the UK and India side – during Cameron’s autumn 2010 visit sparks flew with the Indian finance minister calling UK aid ($700m) ‘peanuts’ in an angry response to the suggestion that the UK might end aid to India.

An Indian official’s memo leaked to the BBC largely concurred with the ‘who do you guys think you are?’ line.

It might be that the Indians got mad because DFID signaled it wanted to direct more aid to individual states rather than the central government. More recently the idea of an emerging power, that is a foreign aid donor itself, accepting aid has raised substantial debate within India itself.

DFID’s Secretary of State, Andrew Mitchell is said to be open to discussion either way but was persuaded so far by Cameron that the UK can’t be seen to be cutting aid to a country that British people think is a poor country even if it isn’t.

1. The mission of donors is poverty reduction

3. Donors are withdrawing from MICs, where the poor live

Currently, India receives about $2bn of aid/year from donors and the UK makes up about a third of this. Since 1998, India has received more UK overseas aid than any other country. Further DFID works in 27 MICs and spends about a third of bilateral programming in MICs in 2008/9. In contrast, almost a half of EU ODA is to MICS.

The paradox is India, like many other countries was ‘graduated’ out of ‘poor country’ status by the World Bank in 2009 to middle income status (more than $1000 per person per year) but is still home to a third of the world’s poor or 450 million people. India is still IDA (World Bank) eligible but will likely graduate three years from now.

Of course this is a good news story of India getting richer but with an underside. Recent research suggests the level of inequality in India is at ‘Latin American type levels’ but the capacity for redistribution by taxation is limited as it would mean prohibitively high levels of taxation.

So sound like these’s still a case for UK aid?

The case against UK aid to India is based on the large resources of the central government in India and that UK aid is small compared to: $300bn forex reserves; the Indian space programme and nuclear programme and India’s own aid programme estimated at at least $550m+.

The case for continued UK aid to India is those 450 million poor people, most of whom live in India’s poor states in a decentralised system where some Indian states have been compared to fragile states in Africa.  Also the poor in India are lower caste, tribes, etc and so very marginalised – not just a bit poor but very poor. Which makes reducing poverty much harder due to entrenched marginalization.

UK aid currently focuses on national-led level poverty programmes and 4 ‘focus states’ – Andhra Pradesh, West Bengal, Orissa and Madhya Pradesh. Of course only one of these is on the BIMARU (in hindi, sick) states group that are often thought to be the poorest states in India. By conventional reckoning Andhra Pradesh wouldn’t be poor, and West Bengal, while not poor, has certainly had some economic hard times as of late. The other two, most people would count as poor states.

If UK aid was ended there is no guarentee that the poorest states would be ‘topped’ up central government. Central allocations to states are based on the “Gadgil formula” which the Indian central Planning Commission uses to determine the allocation of central funds to the states. This is how it goes – feel free to correct fiscal experts if I’ve got this wrong – allocations are largely (60%) based on population size, with the rest accounted for by income per capita, tax collection, irrigation and power projects and ‘special problems’. There are also transfers under centrally sponsored and central sector schemes and a third category of transfer that is known as the ad hoc transfer and is non-formulaic. In short, remove aid from the poorest states and there is no guarantee of a top up.

What could DFID and donors do differently?

i. Focus on poor people, not poor countries

If the focus of aid is poor people not poor countries then the low income/middle income country way of looking at the world needs a rethink. DFID could switch its aid allocation metrics to fit DFID’s mission – ie from poor countries (low or middle income countries) to poor people. The new Oxford University and UN multidimensional poverty index (MPI) measure might be one alternative tool. But there are many others.

Maybe aid is no longer about money transfers with MICs. There is the ‘do no harm’ agenda – designing favourable and coherent development policies on remittances and migration, trade preferences, climate negotiations and climate financing, as well as tax havens – and a case for making aid increasingly about global public goods (and the importance of MICs support to these) and multilateralism, especially in middle-income countries and where aid might be channelled through the United Nations Children’s Fund, for example, or a new global fund for cash transfers to households as a direct poverty and redistributive measure.

OR maybe MICs may not want traditional aid at all.

iii. See equity and shared prosperity as a global and donor concern not just a domestic issue

More equitable countries reduce poverty faster, and stubborn asset, gender or identity inequality (ie caste systems) might begin to explain persistent poverty amid wealth in MICs. This entails some thinking on what aid is for and it’s role perhaps in supporting political voice of the poor and marginalized in policy processes. Any attempt to discuss inequality will be viewed as an infringement on political sovereignty but is domestic inequality solely a domestic issue if it hinders the effectiveness of aid? And it’s not just UN agencies such as UNICEF talking about equity even the IMF thinks inequality is now real concern as it slows down poverty reduction.

Or foreign policy relationship maintenance – why rock the boat?

Or is it that aid is doing good in the poorer states so why stop even if the central government could fund it?

And a final thought, after India, what about aid to Ghana?  Which is due to graduate to middle income status next year…