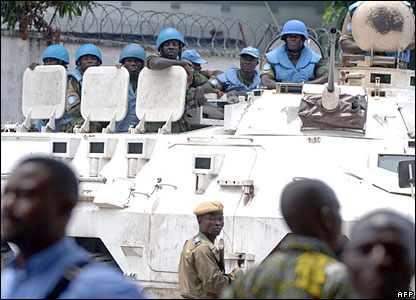 How do you get your kids out of baby blue bonnets and into manly blue helmets?  Send them to summer camp in Harrietsville, Ontario, that’s how:

The rope bridge wavers and wobbles as Devlin Coughlin makes his way across it and over a dried-out stream bed. Back on solid ground, the 12-year-old boy grins as he’s helped from his safety harness.

“Now imagine doing that as a soldier with your rucksack and 150 pounds of gear,” says Chris Farrish. It might be a stretch for Devlin to get his head around that idea. But not for Farrish. After serving 20 years in the Canadian military, including a stint in Afghanistan in 2007, Farrish knows a thing or two about the skills that soldiers need to survive.

And that’s exactly what Farrish and co-director George Myatte, who served in the first Gulf War and Bosnia, are trying to impart to the young people here at their Adreniline Rush Youth Adventure Camp.

Shouldn’t that be “Adrenaline”? Still, the Rush sounds rather fun…

For the past two weeks, about 20 young people ages 12-17 have been learning the ropes (sometimes literally) at Adreniline Rush. The camp is situated at Peacekeeper Park, a registered charity that honours the work of Canadian peacekeepers with programs and facilities, including an outdoor “path of honour” featuring educational plaques about Canada’s peacekeeping heritage.

That pariotic [sic] theme is evident everywhere. The four walls of the mess hall, for instance, are lined with more than 150 photographs of Canadian soldiers killed while serving in Afghanistan or with peacekeeping missions. “It gives them a taste of some of the sacrifices that were made so they can appreciate what they have,” says Farrish.

.@ChrisHauty’s Deep State is the most satisfying political thriller I’ve read in a long time

A little piece I wrote with Lizz Niemeyer about the growth of community-driven brands, and the responsibility that comes with leading a community. Enjoy! twitter.com/MUSEbyclio/sta…

Twitter friends, hivemind: Who inspires you? (rules: they have to be alive, and not your relative)

Can’t imagine being parents of poor kids, BAME kids, disabled kids, having to introduce the idea that there are some people who believe these things and that some of those people are very powerful indeed. How have we got here? 💔 theguardian.com/politics/2020…