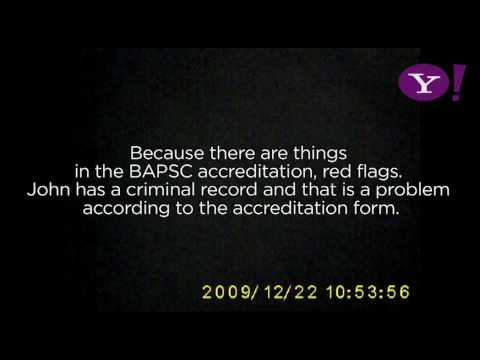 UK Trade and Investment’s Mike Gavin has been caught on camera by Heydon Prowse dishing out the following advice to a company offering ‘security’ services:

“You can also use that embassy to present your company. So you can invite people to a reception or a presentation. Again, you pay for the room but it’s all arranged for you,” he said.

“There is a perception that you’re endorsed by the government because it’s a government building. Of course it’s crap, we don’t.

“All we do is due diligence to check that you’re not going to appear in theTelegraph on Sunday embarrassing the hell out of the British Government.”

He explained that in countries such as Nigeria using the embassy was the “easiest way to get everybody together”.

Prowse asked: “Because of the security situation?”

Mr Gavin replied: “No, because in places like Nigeria they love to show off that they have got this card from the British Embassy, it’s got Ambassador invites, British Government logo and they say ‘Look I’m going to a garden party’.

“It’s all bollocks, but everybody in Nigeria wants one because they want to be seen getting out of the car, going into the High Commissioner’s office. It’s all perception and that’s part of what you don’t have at the moment.”