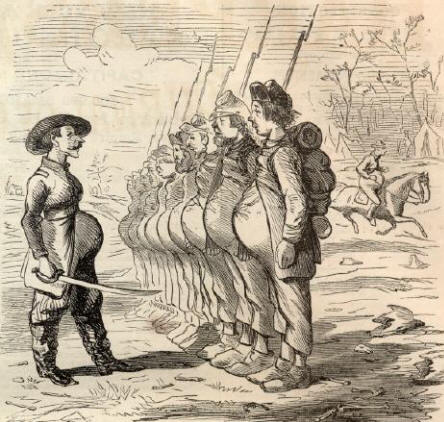 The BBC reports that U.S. forces may soon be slimmer targets for Taliban snipers:

Burger bars and pizza joints in Nato bases across Afghanistan are being closed down in an effort “to increase efficiency across the battlefield”. A Nato spokesman said that “amenities” at bases across the country are being phased out for logistical reasons. He said officials at each base will decide exactly when they are axed.

Nato’s top Afghanistan commander, Gen Stanley McChrystal, made it clear last year that the days of Burger King and Pizza Hut on bases were numbered. He expressed concern that burger bars, pizza restaurants and other stores in large International Security Assistance Force bases at Kandahar, Bagram and Mazar-e-Sharif served as a distraction to the military mission.

That may sound like common sense, but McChrystal’s stand against military obesity may be as doomed as Custer’s against the Sioux.  A recent humor piece in the New Yorker drew attention to this remarkable news story from last December:

The latest Army statistics show a stunning 75 percent of military-age youth are ineligible to join the military because they are overweight, can’t pass entrance exams, have dropped out of high school or had run-ins with the law. So many young people between the prime recruiting ages of 17 and 24 cannot meet minimum standards that a group of retired military leaders is calling for more investment in early childhood education to combat the insidious effects of junk food and inadequate education.

“We’ve never had this problem of young people being obese like we have today,” said Gen. John Shalikashvili, former chairman of the Joint Chiefs of Staff. He calls the rising number of youth unfit for duty a matter of national security. “We should be concerned about how this will impact this overstretched Army and its ability to recruit.”

So, are we fated (fatted?) to defeat at the hands of meaner, leaner foes?  Not if we choose to pick a fight with China, according to the latest edition of Foreign Policy.  It notes that China’s one-child-per-family policy “is widely perceived as creating a generation of spoiled, overweight boys, dubbed ‘little emperors’, who are doted on by four grandparents while their parents toil to support them in fields, factories, and offices.”  The result: soldiers who resemble first-year undergraduates!

The [Chinese Army] has found that such soldiers have better communication and computer skills than their peers with siblings. However, they haven’t performed as well in other ways. Only-child recruits are not as tough; they don’t like to go through the pain of intense training; they call in sick more frequently; and they struggle to perform some simple chores like doing their own laundry.

Is this the shape of future war: no more mass armies, just massive soldiers?

[Picture credit: Son of the South.]