What is it with Canada? 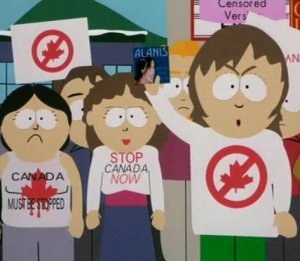 Canadians used to think of themselves as global citizens, par excellence. Recently, though, this image has taken a battering.

Canada is now so obstructive in climate negotiations that even the Chinese government has had enough of its ‘conniving’ ways. In the midst of global economic turmoil, Canada’s main priority for the recent G7 summit was to force feed finance ministers seal meat.

And, at the Winter Olympics, it is so desperate to Own the Podium that it has  long planned to keep practise sessions for other countries to an absolute minimum in order to ensure its athletes get maximum home advantage. “Skeleton racer Mellisa Hollingsworth will be flying down the fastest track in the world at Whistler with the benefit of 200-plus more practice runs than her rivals,” boasted one of its papers last week.

Canada was told that this policy could be disastrous, especially for the luge and for skeleton (a kind of tobogganing) where the Canadians have built a faster track than any in the world, making practise essential.  “The speeds are going to be high up in the 100s,” warned the British performance manager. ” Therefore accidents are going happen and do happen in sports such as these. We’ve seen broken legs or even worse before for example.”

Sure enough the worst did happen, with Georgian luger, Nodar Kumaritashvili killed just hours before the opening ceremony. Charmingly, the Canadians have quickly wrapped up an investigation that blames the dead guy for the accident.

On Thursday, a BBC survey showed that Canada’s international image is beginning to take a battering:

Even Canadians, the survey shows, believe the country has a less positive global influence than before. One wonders: do they care?