The paper of rumour 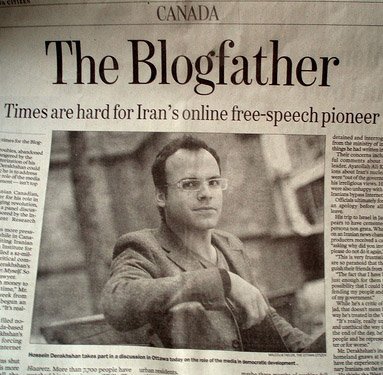 Standards are soaring at the New York Times. For the self proclaimed  ‘newspaper of record rumour’, it seems that news is now “defined as anything juicy that catches our eye on Twitter”.

Hossein Derakhshan – or Hoder as he is often known – has been dubbed the Iranian blogfather. Back in 2001, his efforts to tailor Blogger for a Persian character set were a catalyst for Iran’s ealy uptake of blogging, which outstripped that of any country in the region.

When I helped run a blog at the World Summit on the Information Society in 2003, we were besieged by Iranian bloggers, with Hoder at the forefront. Here’s Aaron Scullion’s account of our confrontation with Ahmad Motamedi, then Iran’s minister for Information and Communication Technology. We repeatedly pressed the Minister on Internet censorship and arrests of bloggers in Iran – all based on Hoder’s work and encouragement.

Hoder visited Israel in 2006 and wrote widely about it, including for the BBC:

For me, an Iranian raised in post-revolutionary Iran, Israel has always had three great qualities: unknown, forbidden and therefore extremely intriguing. That’s why I finally decided to visit Israel.

But unlike all Iranians who have visited Israel, I decided to publicise my visit to the 20,000 daily readers of my blog – even though I knew I would not be able to go back to Iran again.

I had a mission, though, which would make the risk worthwhile. I wanted to break the stereotypical images both governments use to advance their radical policies.

He then made the extraordinary decision to go back to the Iran, appearing to have had some kind of rapprochement with the Iranian regime. In November 2008, however, he was arrested, and has not been heard of since. There’s been no charge and, as far as I know, no news.

Time then, for the NYT to charge into the fray with a claim that Hoder is – and may always have been – a spy for the Iranian secret services:

Suspicion that Iran’s blogging community has been infiltrated by double agents has sown fears and doubt online. For instance, a few days ago Omid Habibinia, an Iranian now blogging from Switzerland, wrote on Twitter about a rumor that a significant figure in Iran’s blogging community is a double agent: “some bloggers [are] saying Hossein Derakhshan (missing since 8 month ago) is working with intelligence agents.”

They have good reasons to make this appalling accusation, you’d think. Er no.

While there is no evidence to support the rumor that Mr. Derakhshan is cooperating with the authorities in their battle against Iran’s opposition bloggers, the Revolutionary Guard does seem to have established what it calls a “cyber army.” Last month a series of updates were posted on Twitter by a blogger who identified himself as a member of the Revolutionary Guard who seemed to be dedicated to finding and helping to arrest opposition protesters and bloggers. Even if Mr. Derakhshan has not defected to the side of Iran’s security forces, it is clear that some Internet-savvy people have taken the fight to suppress the opposition’s protests online.

Now it’s possible that Hoder has agreed to cooperate – perhaps under torture. Maybe, he even did a deal before he went home. Perhaps, too, the Times’ editor, Bill Keller, is still shagging his reporters. Point is we don’t know whether any of these assertions are true.

You have to hand it to the cowardly shits at the Times, though. If you’re going to libel someone, it makes sense to do it when your target is locked away in a jail cell. Then you can publish whatever the hell you like.