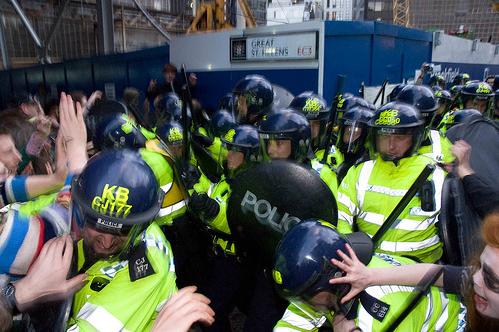 As Chris’s account shows, the officer who assaulted Tomlinson was not a solitary ‘bad apple’ – although the Met and the Home Office may well seek to present him as such, if a prosecution results from the IPCC investigation. On the contrary, the problem was systemic.  As former Met Police assistant commissioner for special operations Andy Hayman wrote in the Times after mingling with both police and protestors on the day,

…the commissioner [of the Metropolitan Police] must ask serious questions about the style of policing. If left unchecked, we have a more violent crowd in uniform than the crowd demonstrating.

So while it’s right that the IPCC should concentrate for now on the circumstances of Tomlinson’s death, it’s also important to get underway with a broader inquiry – and a broader process of re-establishing confidence in the Met through re-establishing accountability.  One question that such a process should look at is whether sufficient measures are in place to identify officers that overstep the line at these kinds of event – not by name, obviously, but by their number.  There’s something strange and worrying in the fact that the IPCC should have said in its statement yesterday that,

At the moment the investigation is focused on identifying the officers in the footage. Several have already come forward and all efforts are being made to trace those who haven’t.

“Several have already come forward?” We’re not talking here about a bunch of kids thumping someone in the dead of night.  We’re talking about the police, at a public event, with hundreds of cameras on them – and yet the Independent Police Complaints Commission is having to ask for help in identifying them. This is absurd.  The solution, surely, is that police riot uniforms should have individual officers’ numbers printed on them in letters large enough to be picked up on cameras – not just in small letters on the backs of their helmets.  Officers in co-ordinating roles already have this (see photo – h/t Flickr user David Hoffman); it should become standard for all officers in public order contexts.

More fundamentally, we need to take a long, hard look at whether recent legislation on public order has created an enabling environment for this kind of policing. What has happened to civil liberties over the last decade is not a shining example of what one might have hoped for from a Labour government – whether you’re looking at the Terrorism Act 2000, the Serious Organised Crime and Police Act 2005, the Terrorism Act 2006, or the Racial and Religious Hatred Act 2006.

As policymakers in the UK, the US and elsewhere consign the term “war on terror” to the trash, it’s a good moment to ask whether we shouldn’t grab the chance to bin some of these Acts at the same time. (In considering this, staff at Number 10 might wish to reflect on the fact that Gordon Brown’s diplomatic success is now being overshadowed – all over the world – by stories about the summit’s policing: c.f. the New York Times, the Wall Street Journal, CNN, Die Welt, Le Monde, China Daily…)

Yeah why on earth would the UK need large-scale, publicly-funded, shovel-ready infrastructure projects that will put lots of people back into good jobs whenever it is safe for them to leave their houses? twitter.com/Barristerblog/…

After the Coronavirus: America Needs to Reengage with the World, Not Retreat from It rand.org/blog/2020/04/a… via @RANDCorporation

"While play can harbor children’s deepest worries, it can also be a place for them to practice their creative problem-solving." @LEGOfoundation twitter.com/cray_kate/stat…

If you only take one thing from this piece, please let it be this: the fight between generosity and selfishness is happening *inside* all of us, not *between* all of us. We all have better angels and we all have to watch out for what our fears do to us. twitter.com/marcusaroberts…