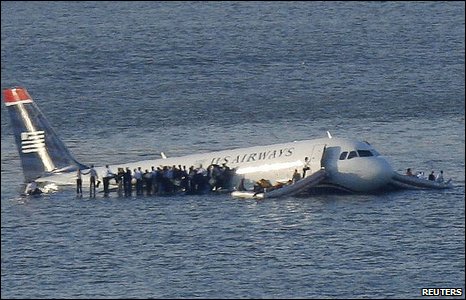 We instinctively grope for religion and invoke God to help us try and explain major accidents and natural disasters. ‘Miracle on the Hudson’ ran the headlines as pictures of Flight 1549 in the river were beamed round the world. New York Governor David Paterson said the city was ‘blessed’.

To make matters worse the media then insist on thinking through all the worst case scenarios:

The landing occurred shortly before 3:30 p.m., just as ferries on both sides of the Hudson were “crewing up” for the afternoon rush hour. That allowed them to get to the plane almost instantly. At the same time, the river — one of the world’s busiest waterways, frequently plied by ferries, barges, tankers and cruise ships — was apparently clear enough of shipping traffic to allow the plane to set down without hitting anything.

So given the potential of the accident to be five, even ten times what it could have been it’s not surprising that we think in terms of miracles. The truth is rather different.

This accident was no miracle but an example of tremendous physical skill and great composure of the pilots. But skill and composure can’t explain how fortunate the 148 passengers were, in exiting safely from the aircraft. Well no, but the landing was executed by a veteran pilot who runs a safety consulting business on the side:

The pilot in Thursday’s landing was Chesley B. “Sully” Sullenberger III, a former fighter pilot from Danville, Calif., with more than 40 years of flying experience. He founded Safety Reliability Methods Inc. to apply advances in safety systems, some of them based on “studies of high-risk, high-performance environments such as aircraft carrier flight deck operations,”

And here’s why training is so crucial:

Jason Goldberg, a pilot for American Airlines who has flown other Airbus jets, said the pilot — identified as Chesley B. “Sully” Sullenberger III — had to slow the plane for landing without stalling, which could have caused the nose to hit the water first, potentially breaking up the plane.
“Dead-sticking an airplane in the Hudson without hitting anything in downtown Manhattan is an unbelievable job by this pilot,” Goldberg said. “It took tremendous physical skill and great composure. The guy is a hero in my book.