A while ago, a few beers drunk, I became embroiled in speculating about decidedly unconventional ways of controlling greenhouse gases. Two ideas lodged firmly enough in my memory to last until the next day: burning sheep and burying trees.

Now before any of you vegans start with the hate mail, I want to stress that this was a thought experiment. No lamb was subjected to even the lightest singeing. But you understand the logic…wouldn’t it be good if you had a machine that could range around marginal land (rather than attractive pasture) under its own steam, all the while turning biomass into a high-octane biofuel?

Use a sheep and you’d get wool as an additional by-product. Plus the UK proved the concept when it incinerated most of the cows in the country when BSE hit…

Tree burying seemed like a cheap and easy way of carbon sequestration (with technology that works today, rather than in twenty years’ time). Grow trees as fast as possible. Then throw them down a disused coal mine. Repeat ad nauseam. Of course, you’d get methane released as the trees rotted – but surely there’d be a way of sealing that in or tapping it off.

It turns out that tree burying isn’t such a bonkers idea – it’s just you need to bury charcoal instead. Or so I discovered today at a post-Poznan washup (hosted by IES, Globe and European Economic and Social Committee), where the best presentation of the day was from Craig Sams on biochar.

Craig founded the Whole Earth organic food brand and Green and Black‘s organic chocolate (both of which he has since sold). He’s now pushing charcoal as a low-tech solution to the climate change problem, working with Daniel Morrell, founder of the Carbon Neutral Company.

Craig’s pitch is as follows (for more detail see this white paper from the International Biochar Initiative):

Craig dropped an eye-popping stat into his presentation. If all available land were devoted to biochar for just one year, then enough carbon could be sequestered to take atmospheric concentrations back to pre-industrial levels. Admittedly, we’d all starve for 365 days – but it shows the potential. 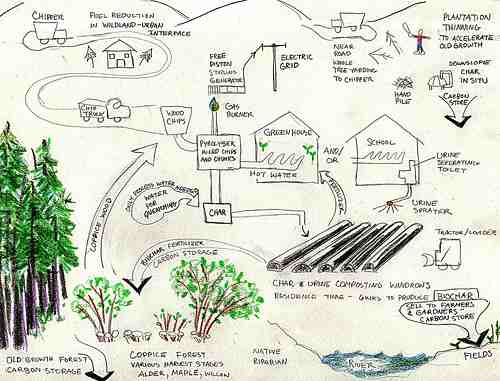 IBI has done some detailed analysis on what might be possible in the real world. They assume that only plant ‘residues’ are used (no competition with food crops) – and I don’t think they include benefits such as avoided deforestation (as more productive agricultural land reduces pressure on forest, while standing forests have enhanced market value). But they still show impressive results.

(Their scenarios measure mitigation potential to 2050 in ‘wedges’ (1 gigaton of carbon or carbon equivalent per year). We probably need around 14 wedges to stabilize at 450ppm CO2e – so a wedge is regarded as quite a big contribution to any solution.)

The results of the scenarios show that most conservatively, the carbon in biochar alone can account for about 1/4 of a wedge (0.25 Gt) by 2030. Our Optimistic Plus scenario reaches one full wedge around 2040… When we count carbon emissions from coal combustion that is avoided by substitution of energy generated by biochar production, three of the scenarios predict more than a wedge of impact on atmospheric CO2 by 2025… Perhaps most intriguing is the positive feedback shown in the Optimistic Plus scenario, where the impact of biochar is shown to continue to increase after the other scenarios have levelled out… As much as 60 gigatons of carbon could be sequestered or offset in just the 40 years to 2050 with the Optimistic Plus scenario.

At the moment, biochar is barely on the climate change agenda, though there was a last ditch lobbying agenda at Bali to get it taken seriously in the run up to Copenhagen. Development agencies (or developed country governments) almost certainly know less about it, despite its potential for poor farmers and forest dwellers (though the technique probably accounts for the ‘black earth’ left in the Amazon by pre-Colombian Indians).

To get it to work on a large scale, of course, would need some kind of functioning market – to pay people prepared to collect the plant material or to store the carbon in their soil.

That we’re some way from having.

But you could imagine a vulnerable consumer-facing industry (that’s you: aviation) using the technique to go carbon neutral (or even negative) in just a few years. Or maybe a hopelessly over-emitting country (take your pick, but I was thinking about the US) could use char to stake out some ground in front of its rivals.

After all, many of the problems of additionality don’t apply to an carbon-reducing activity that no-one is using these days. Maybe there’s some big drawback, but it has to be better than burning sheep, doesn’t it?