Steven Chu – Nobel prize laureate in Physics – is Obama’s new energy secretary. He’s freaked out by climate change, and believes that energy efficiency should be a key part of our response.

If Chu can do anything significant on energy efficiency while in post, it will be a big deal. Have a look at the McKinsey cost curve where huge emissions cuts are available ‘below the line’ – in otherwords, cuts that should more than pay for themselves. 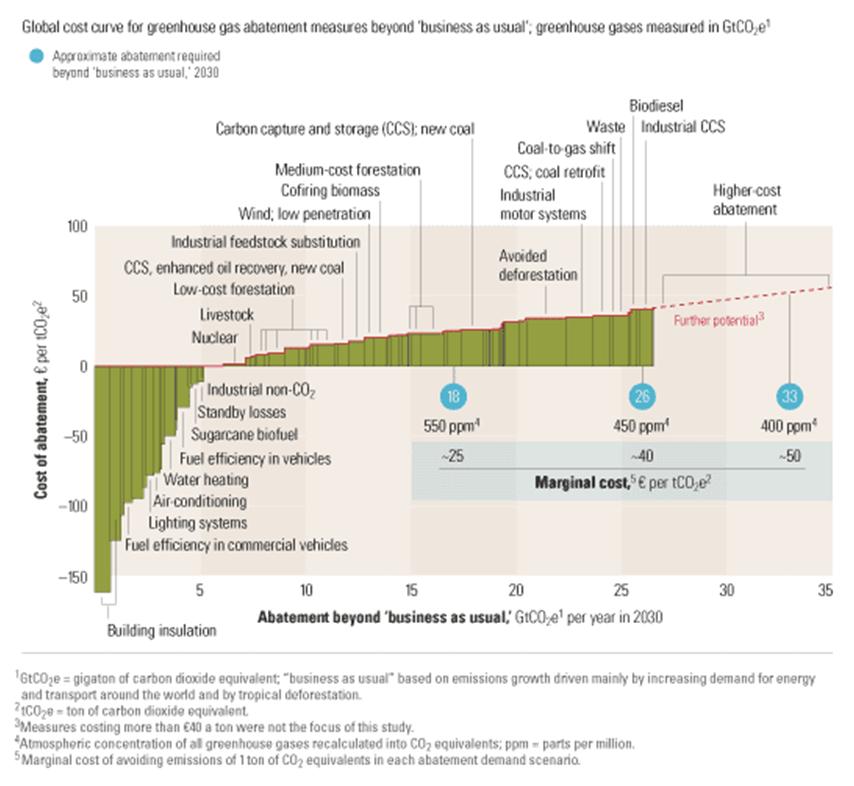 These cuts can be found across all sectors (residential, 26%; commercial, 10%; industrial, 39%; energy transformation, 16%; and transport, 10%) and reveal a rat’s nest of market failures. Many – though important in aggregate – are simply “too small to be a priority” for individual consumers and businesses.

This is not a techical problem, though Chu likes those too. (He predicts plunges in the cost of solar and is a booster for second generation biofuels, though not ethanol – “good stuff, but I’d rather drink it”.)

To make any progress, he’s going to have to get to grips with the human drivers that are the most neglected part of our response to climate change (think: behaviour, organisations, incentives, institutions – and on the latter, read Douglass North’s classic Nobel Prize speech).

This is a huge challenge, especially for a fusty government bureacracy (and maybe also the Nobel prize winning tech-head who will now lead it). Chu is therefore going to need outside help. He should be looking to pull together a dream team of people who know about people (economists, psychologists, political scientists, marketeers etc) – and ask them to build a model that will influence not just the US, but the rest of the world as well.

He’ll then need to work hard to build political consensus for a raft of regulatory and legal changes – with the aim of applying the right mix of price signals, subsidies, and new regulations to the problem. Then he’ll need to maintain public support as he attempts to reengineer the way both businesses and individuals operate.

Can it be done? Given how little progress we’re making on emissions, I don’t see there’s any choice. My fear, of course, is that we’ll just pile a heap of policy failures on top of the existing market failures. Let’s hope Chu sets out some stretching metrics – and keeps coming back to whether they’ve been achieved.