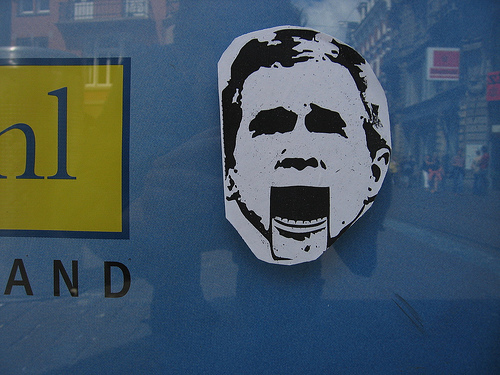 George Bush – he liberated the downtrodden, helped the sick and gave succour to the old. Yes, those are the fond thoughts the 43rd President hopes we’ll have for him:

I would like to be a person remembered as a person who, first and foremost, did not sell his soul in order to accommodate the political process. I came to Washington with a set of values, and I’m leaving with the same set of values. And I darn sure wasn’t going to sacrifice those values; that I was a President that had to make tough choices and was willing to make them. I surrounded myself with good people. I carefully considered the advice of smart, capable people and made tough decisions.

I’d like to be a President (known) as somebody who liberated 50 million people and helped achieve peace; that focused on individuals rather than process; that rallied people to serve their neighbor; that led an effort to help relieve HIV/AIDS and malaria on places like the continent of Africa; that helped elderly people get prescription drugs and Medicare as a part of the basic package; that came to Washington, D.C., with a set of political statements and worked as hard as I possibly could to do what I told the American people I would do.

(Photo under a cc license from icbulk.)

We will come, through the Obama prism, to see that Bush’s sins were largely the absence of rhetorical skills, unfortunate shoot ’em braggadocio in 2003-4, the federal response to Katrina, and a certain administration haughtiness about the problems in Iraq between 2002-6, but not most of his policies that included prescription drugs, No Child Left Behind, AIDs relief in Africa, the removal of two odious regimes, and consensual governments in their places, a framework at home to stop 9/11-type terrorism, and good working partnerships with key allies abroad such as Britain, Germany, France, Italy, India, et al, and a pragmatism in handling rivals like Russia and China.

In short, given all that, Obama’s victory (predicated on painting Bush as a Hoover/Nixon redux), more so even than perhaps a John McCain’s, may do more for Bush’s reputation that anyone ever imagined. And the Mumbai mess (over there, not here) will only empasize all this, as an array of old 9/11-era experts who used to warn us about radical Islam, then, in the subsequent respite at home, screamed that Bush fabricated a war against terror against bogeymen, and now in their third manifestation are paraded once more out to warn us about?—why, yes, radical Islam!