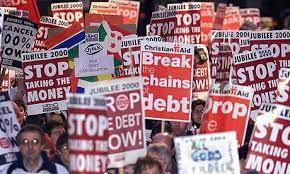 Over the past six months, I’ve been working with my friend and colleague Rich Gower on a report for Tearfund, the Christian development NGO, entitled The Restorative Economy: Completing our Unfinished Millennium Jubilee – and today, the report is finally published. Here’s the summary, and here’s the full report (we also have a comment piece on the Guardian today, which you’ll find here).

The process of writing this report has been especially close to my heart, and has left me at the end feeling that I want to devote much more of my energy to the massive task of movement building and values shifting that lies ahead of us. I’ve been working in and around the multilateral system for nearly a decade, and like many of my friends and colleagues in that world, have frequently felt acute frustration at the postage stamp-sized amount of political space that currently exists for solutions on the scale we need, both internationally and at home in the UK.

This report is an attempt to start thinking about what a new approach to that challenge might look like – across four chapters. The first one sets out a snapshot of where we are: in many ways a golden age for development, but one in which three huge challenges – environmental unsustainability, growing inequality, and the millions and millions of people still left behind as globalisation accelerates apace – remain ours to solve.

In chapter two, Rich and I set out the need for a different theory of influence. Many of us who work in the fight for development, justice, and sustainability have I think been feeling the limits of theories of change that rely primarily on ‘insider lobbying’. We take that here as our starting point for asking what an alternative approach might look like: one that places much more emphasis on how we build new grassroots coalitions, transform values, and tell each other much deeper stories about where we are, how we got here, where we might choose to go next, and who we really are.

Chapter three then explores the potential to discover such deeper stories in theology. All of us witnessed how the biblical idea of jubilee was able to animate a transformative civil society movement fifteen years ago, and proved powerfully resonant far beyond the church groups that formed Jubilee 2000’s core. As someone who worked in the UK government at the point when the 2005 Gleneagles summit concluded its debt relief deal, I still have to pinch myself when I remember that the average low income country’s debt fell from nearly 75% of its GDP in 2000 to just over 25% today – something that happened partly because of politicians, but much more fundamentally because of a coalition of millions of ordinary people, united by a shared story.

In this light, we argue, it’s important to remember that the once-a-generation jubilee festival described in the Old Testament was never about debt relief alone. When you go back to the original texts, as we did at some length in the course of researching this report, you find that they were also about environmental restoration. Ensuring that there was real attentiveness to enabling people living in poverty to meet their basic needs. And ensuring that concentrations of wealth did not build up from one generation to another. All three of these themes are of course fundamental to where we find ourselves today, in 2015. (And as friends working on the post-2015 Sustainable Development Goals will already have spotted, they’re central to that agenda too.)

So in a very real sense, the work we began in 2000 – our millennium jubilee – remains a work in progress. If we can complete it, then our kids will enjoy the kind of future that I know I want for my children – Isabel, 5, and Kit, 2. And in chapter 4, Rich and I set out what we think that would look like in practice.

We argue that it starts with the changes that all of us need to make in our own lives. This is partly because of the direct impact that such changes can have, of course, but we think the main issue here is something to do with the quality of intention that movements exemplify. Wherever movements not only demand but live out the change they want to see in the world, there’s a raw power there that can exert the kind of non-linear effect on politics that progressives so urgently want to see.

But ultimately the decision about the future we want has to be made by all of us collectively, as well as each of us individually. So chapter 4 ends with a ten big ideas for far-reaching policy changes of the kind that we think have this transformative power. The ideas cover a very broad waterfront – from reforming the financial system to global climate policy, and from how we use aid internationally to how our tax system works at home.

We don’t by any means think the proposals we set out are the last word on the subject. But if they can play even just a small part in catalysing a serious conversation, among all of us, about the choices we have in what we bequeath to our kids, then I think I speak for all of Tearfund’s fabulous advocacy team, Rich, and I when I say that we’ll be more than happy with the result.