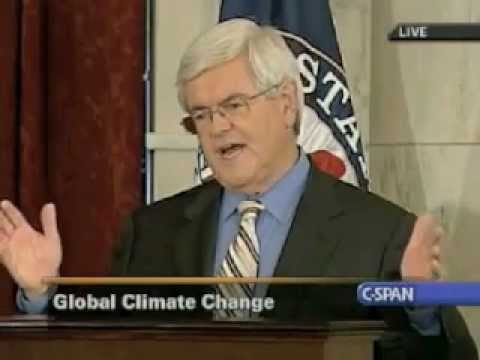 I can see why the world is warming to Newt. He talks a lot of sense on climate change.

My message is that the evidence is sufficient that we should move towards the most effective possible steps to reduce carbon loading in the atmosphere… and do it urgently.

I think there has to be a green Conservatism. There has to be a willingness to stand up and say, “here’s the right way to solve these [problems] as seen through our value system. And now have a dialogue about what’s the most effective way to solve it, rather than get into a fight about whether to solve it. When I was speaker, on a whole range of biodiversity issues, I intervened again and again on the side of the environment. I really do believe [in the environment].

I would be delighted to see open ended hearings – not in time, but in terms of the topic – that started and said: “If we’re serious about a dramatic global reduction in carbon loading over the next twenty years – starting immediately – what are the different models that might work? Are there incentive based, market-oriented models that might work as well or faster? And is there a chance that they would produce the technology that would make it easier  for India and China to decide you can have green prosperity?”

Because if you can develop green prosperity, you change the entire trajectory for the planet, not just for the US… I would love to see hearings that didn’t start with a fight over cap and trade… which I don’t think is the way to start. The way to start is to ask what the optimum choices we can make strategically to minimize carbon loading in the next twenty years.

I believe we can bring a science, technology, and entrepreneurship/incentive-based model that would at least be worth being considered seriously by the House and Senate.

Two minor caveats. First, I don’t think  Gingrich ever developed his idea for an incentive-based model that wasn’t cap and trade. And, of course, this is from back in 2007. I hear the ex-Speaker’s position has been more intelligently designed since then. Here’s the 2011 version:

Remember, in the mid-1970’s there was a cover of Newsweek and Time that says we’re in the age of a brand new glacial period and they had a cover of the Earth covered in ice. This is the 1970’s. Now many of those scientists are still alive and they were absolutely convinced. I mean, if Al Gore were able to in the 1970’s we would build huge furnaces to warm the planet against this inevitable coming Ice Age.

I’m not disputing or discrediting the National Academy of Sciences, I’m saying a topic large enough to change the behavior of the entire human race is a topic that is more than science and deserves public hearings with very tough minded public questions and we’ve had almost none of that on either side.

The ‘more than science’ hearings should be fun! Perhaps Newt will explain what happened to evidence that was sufficient to demand urgent action just four years ago…