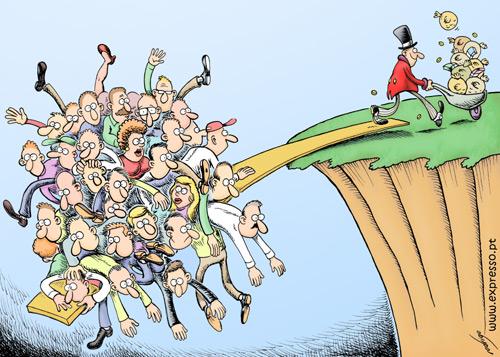 It’s evident within-country inequality is back on the radar of some of the major international organisations including UNICEF and UNDP who are leading the wider UN body but, perhaps surprisingly, also the World Economic Forum and the International Monetary Fund.

The basic case is as follows: inequality matters because high inequality can inhibit growth, discourage institutional development towards accountable government and undermine civic and social life leading to conflict especially in multi-ethnic settings.

A number of new studies have pushed thinking forward and a new paper by Chilean Economist Gabriel Jose Gabriel Palma raises a number of questions about the middle classes in particular and their role in redistributive politics.

Five years ago the World Bank’s World Development Report on inequalities was important in that it opened a wider debate on the interaction between types of inequality and how inequality reproduces itself across generations as a result of ‘inequality traps’ or persistent differences in power, wealth and status between socio-economic groups that are sustained over time by economic, political and socio-cultural mechanisms and institutions.

Since then, the impact of inequalities on economic growth has received considerable attention. For example, Klasen and Lamanna in one paper detailed how gender inequalities have held back economic growth and Grimm in another paper that health inequalities impede growth. Recently, the IMF too published a paper by Berg and Osty outlining how high inequality impedes the sustainability of growth spells. High inequality has also been linked to fragility and conflict (see Cramer or ; Stewart et al., papers).

The new Solt database of the main measure of inequality (known as the Gini after an Italian Sociologist who developed it) was analysed by Ortiz and Cummins at UNICEF who concluded the evidence showed:

And inequality in Latin America rose slightly 1990-2008 but fell between 2000-2008 and inequality was static in the Middle East and North Africa.

However, a new paper by Chilean Economist Gabriel Jose Gabriel Palma does a detailed study of within country inequality between 1985 vs 2005 suggesting the gini hides as much as it reveals.

Instead we need to look at each 10% of the population and what they get.

He finds that there is now a surprising similar picture in most countries, noting:

These social democrats have strong support in the middle classes and this throws up the question posed by Birdsall et al:

Might the growing middle classes in countries like Chile and Brazil help lock in leftist social democratic political regimes (whether because or despite its concentration in the top quintile of households)?  There is no evidence that a large middle class is necessary let alone sufficient to these regimes.  But a growing global middle class does seem likely to reinforce effective government that manages moderate redistribution while retaining investor confidence in the likelihood of continuing growth and price stability. Put another way: When is the middle class large enough to become politically salient in supporting or at least tolerating the kind of social and other distributive policies that are good for them but turn out to be good for the poor—for example universal public education?

Food for thought – the middle classes as the new revolutionaries?