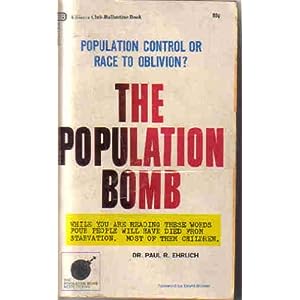 Dominic Lawson’s Independent piece yesterday, in which he debunked the “neo-Malthusian movement” of “population doomsters”, made me chuckle.  Here’s a sample:

There is an increasingly noisy claque of Malthusians who insist that an “exploding” global population (as they put it) is going to lead to disaster – from Boris Johnson to Joanna Lumley, not to mention Jeremy Irons and Prince Charles.

Concerns about resource scarcity are completely overblown! Human ingenuity and innovation have always won out in the past! Why should this time be any different?

While the misanthropic Malthusians will gloomily see [the arrival of Earth’s seven billionth human some time in 2011] as just “another mouth to feed”, he might more charitably be seen as another human whose ingenuity, creativity and intellect can be of benefit to the world.

In AD200, Tertullian wrote: “We are burdensome to the world; the resources are scarcely adequate for us.” Of course, the resources of the planet are not, in the purely mathematical sense, infinite; but neither is the population.

This thought ought to be of some cheer; but I fear that even if the entire world of science and engineering accepts this form of rational optimism, it will not change the mind of a single Malthusian. They’ve been wrong for so long. Why stop now?

What makes me smile about these kind of ‘Promethean’ arguments is that they rest on a sleight of hand. What Lawson implies is that concerns about resource scarcity rest more or less exclusively on arguments about ‘the population explosion’.  But that’s not the case. When I sat down to write The Feeding of the Nine Billion (pdf), for instance – a report which was very much concerned with resource scarcity – I took care to note that:

Population growth reached its fastest rate in 1963, at  2.19% a year.  Today, the growth rate has almost halved, to 1.15%.  It continues to decline, and is projected to fall below 1% in 2020, and to less than 0.5% by 2050.  Long term projections suggest that world population will finally stabilise in the year 2200, at just above 10 billion people.  The global picture, then, is not the Malthusian nightmare of exponential growth curves of popular imagination.  The long term outlook is perhaps less one of constant ‘running to stand still’ on food production than a case of ‘one last push’.

While population is a significant factor in the outlook on food security, today’s scarcity analysts recognise it as just one among a range of factors – a range that also includes: the growing size and affluence of the global middle class, and its changing diet and energy consumption patterns; competition for land, between uses from crops and livestock to biofuels, carbon sequestration and cities; increasing water scarcity, due to unsustainable groundwater extraction and changing preciptiation patterns; higher oil prices, which affect costs of fertilister, on-farm energy use, processing, transport and so on; and of course climate change as the game changer in the background.

Lawson doesn’t discuss any of these other factors as he cheerily rebuts the notion that anyone should be concerned about global food security prospects. Instead, he fires merrily away at the ‘population bomb’, despite the fact that practically no serious analyst of resource scarcity that I can think of still thinks in these back-to-the-70s terms – a point that Lawson unintentionally proves when it transpires that the key champions of the point of view he sets out to rebut are, er, Boris Johnson, Joanna Lumley, Jeremy Irons and Prince Charles.

The truth is that the ‘Malthusian determinism’ that Lawson and his ilk so love to rebut is a straw man. Most analysts working on resource scarcity recognise that we’re dealing with high levels of uncertainty, and hence that it’s ultimately about intelligent risk management. Lawson’s brand of techno-Panglossianism, on the other hand – that’s determinism.