Yesterday, I warned that governments were losing control of the Eyjafjallajökull crisis:

In the UK, it doesn’t help that there’s an election on. But Lord Adonis, the Secretary of State for Transport, is not running for office. It would be good to see greater signs that he – or someone else – is being much more decisive about taking charge.

Apparently, there are more than a million British citizens still stranded abroad and the MET Office has said there will be no flights on Monday 18 April (no confirmation from NATS on that as yet).  Both the media and airlines are clearly getting restless. A new narrative is crystallizing: that the threat from the ash cloud has been substantially exaggerated.

Albeit belatedly, British ministers have finally shown they are now more fully engaged with events, with five lining up in Downing Street for a press conference. COBRA will meet tomorrow morning.

In my opinion, however, the Foreign and Commonwealth Office should be much more specific about what its consular staff are doing. I’m talking about concrete and detailed briefing for the media.

How is it using its consular surge capacity (the Rapid Deployment Team)? How many extra staff have been deployed? In which airports does it have staff dealing directly with passengers and airlines? How, practically, are these staff managing to assist people?

Update [19/04 9.30 am]: A few other thoughts. The UK government social media response has – so far – been distinctively unimpressive, despite the fact that many government departments, the FCO included, have very good social media team. (Good this morning, though, to see the gov Twitter feeds finally starting to use the Twitter #ashtag and #ashcloud tags)

In contrast, Eurocontrol – which oversees European airspace – has emerged as a model of best practice. Whoever it behind its Twitter feed is doing a stellar job – detailed factual updates, numerous responses to people’s questions, and all in an identifiably human voice.

Also, the pressure is clearly building on governments to downgrade the threat, based on test flights. But, say, a plane had a 1/1000 risk of getting into trouble (e.g. hitting a slightly thicker patch of ash during its flight), then you could run a dozen or so tests and have a very slim chance of hitting trouble. So you open Heathrow, which has 1300 flights every day…

Once again, the complex risk calculations at the heart of this crisis are making Anthony Giddens’s 1999 Reith lecture look very prescient:

There is a new moral climate of politics, marked by a push-and-pull between accusations of scaremongering on the one hand, and of cover-ups on the other. If anyone – government official, scientific expert or researcher – takes a given risk seriously, he or she must proclaim it. It must be widely publicised because people must be persuaded that the risk is real – a fuss must be made about it. Yet if a fuss is indeed created and the risk turns out to be minimal, those involved will be accused of scaremongering.

Suppose, on the other hand, that the authorities initially decide that the risk is not very great, as the British government did in the case of contaminated beef. In this instance, the government first of all said: we’ve got the backing of scientists here; there isn’t a significant risk, we can continue eating beef without any worries. In such situations, if events turn out otherwise – as in fact they did – the authorities will be accused of a cover-up – as indeed they were.

Things are even more complex than these examples suggest. Paradoxically, scaremongering may be necessary to reduce risks we face – yet if it is successful, it appears as just that, scaremongering. The case of AIDS is an example. Governments and experts made great public play with the risks associated with unsafe sex, to get people to change their sexual behaviour. Partly as a consequence, in the developed countries, AIDS did not spread as much as was originally predicted. Then the response was: why were you scaring everyone like that? Yet as we know from its continuing global spread – they were – and are – entirely right to do so.

This sort of paradox becomes routine in contemporary society, but there is no easily available way of dealing with it. For as I mentioned earlier, in most situations of manufactured risk, even whether there are risks at all is likely to be disputed. We cannot know beforehand when we are actually scaremongering and when we are not.

When dealing with risk, governments are almost always going to emerge at least somewhat discredited. The question is how badly

Meanwhile, here’s Marcus Fairs with some information that’s (i) much more specific and helpful; (ii) directly covers what named FCO consular staff are up to. 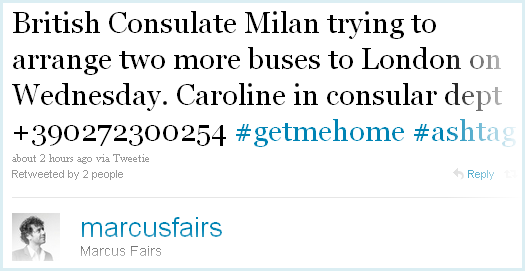 Also, it is increasingly clear that NATS – the UK’s air traffic control organisation – is floundering. No Twitter feed. A website that is still in emergency mode. And, worst of all, official updates on their site, but leaks to other news organisations with different information. Not good. 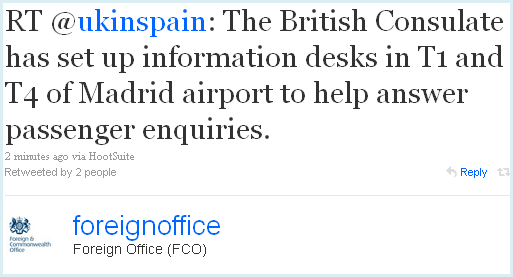